A Day in Panama

Posted on February 8, 2013 by Kris Cunningham

I thought today I’d just share some random photos of things going on here. If you click on a photo you can scroll through the gallery.

My friend and neighbor Haydeé gave me a baby coconut palm. 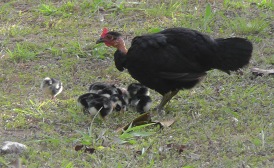 There is a rooster and two hens that wander our street. Lately the rooster has been out by himself. We haven’t seen the gray hen in a while, or the black one for a long time. Today we found out why! 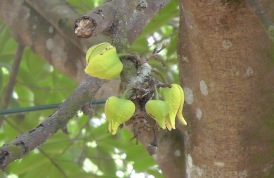 My neighbor confirmed that these are indeed guanaba flowers that will become fruits.

We have a guanaba tree in the back yard (aka soursap) which has quite a few small but growing fruits on it. The neighbors think this is a wonderful thing, but we don’t like them at all. This is a lucky thing for the neighbors.

There is a rooster and two hens that wander our street. We haven’t seen the gray hen in a while, and the black one hadn’t been out for a long time. Today, we found out why!

Two of the chicks managed to climb up something and fall over on our side of the fence, so Joel rescued them. Thankfully when we put them back on the other side of the fence they spotted their mom in the distance and took right off towards her, so all is well now. 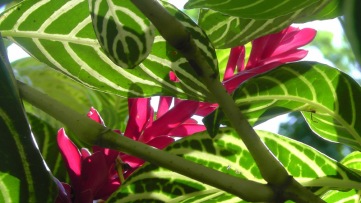 Another pretty photo of Joel’s – the ginger growing next to our fence in the neighbor’s yard. 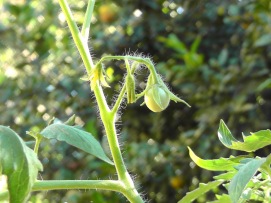 Our first tomato! This plant is a volunteer that came up in the yard. Photo by Joel.

We got some sunflower bird seed to grow some sprouts, but decided I like them better growing in the yard. Funny, the birds don’t seem interested in this or any other kind of seed in the bird feeder, but they sure love fruit peelings. This photo was also taken by Joel.

Another photo of Joel’s – morning dew on a flower 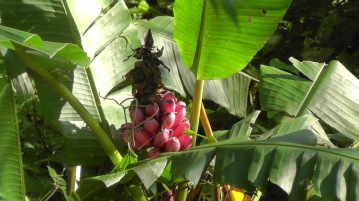 Joel went to put the trash out this morning, and while he was out he took a photo of the bananas growing in the valley below our house 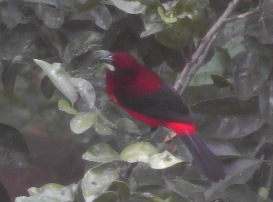 I have seen these red birds occasionally but they are very shy and hard to catch with the camera. When I saw two in the tree outside the window, I snuck up to the window with my camera and was lucky enough to catch a few photos.

This is the other red bird of the pair who visited the tree outside our window.

A pretty blue gray bird that visits sometimes, but rarely stays long enough for us to get a photo.

I found the green nut with the red center under this tree.

I found what looked like a seed pod that had opened to reveal a green nut. I put it on my desk, and the next day the green nut opened to show me this bright red center!

It’s nice to go back to a cooler car because it’s parked underground, not out in the sun.

Underground parking at the nearby shopping area 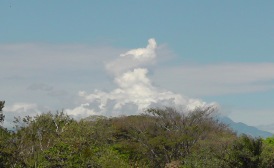 Volcan Baru is erupting! (with clouds) 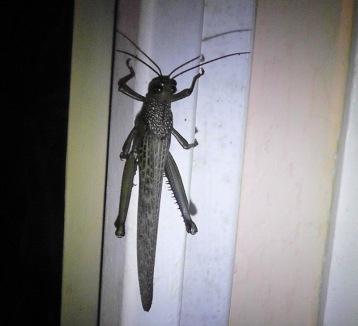 We live in David, Chiriqui Provence, Republic of Panama! This blog is about some of our experiences in our new country.
View all posts by Kris Cunningham →
This entry was posted in Exploring the Area, Flowers, Panama, photography, wildlife and tagged Central America, Chiriqui, Chiriqui Province, David, expat, expatriate, Flower, International Living, Latin America, Panama, Photograph, photography, Volcan Baru. Bookmark the permalink.

6 Responses to A Day in Panama