Cows in the Neighborhood | Water and Electricity Problems

Cows are everywhere! Our neighbor Roberto even had a couple calves in his yard for a while. They have gone to his farm now, but there are plenty of others in the area. When I see cows I think of my blogging friend Karen and her stories of the vacas (cows) in her neighborhood looking longingly at her green garden while they eat brown grass (pray for rain in her neighborhood!)

We came across this playful calf near our house a couple weeks ago. 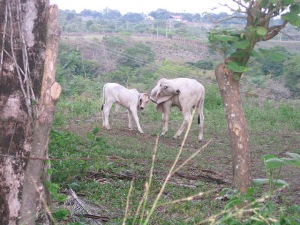 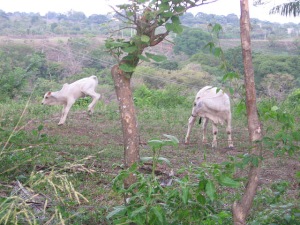 Today, we spotted Roberto feeding a bit of corn to the cows in the field next to his house. 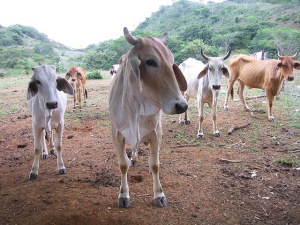 Roberto told me that he was giving the cows a treat because they are having a hard time getting by on grass after such a hot, dry summer. Here, cows fend for themselves with minimal human intervention.  Things are looking much more green now but we need a lot more rain to catch up after months of hot, dry, windy weather.

School has been canceled for the rest of the week too. There is not enough water in the mountains and the rivers are dry. The dry rivers can’t run the hydroelectric generators so the government is trying to decrease electricity usage, saying the problem has reached critical levels. All schools and universities are closed.  Businesses and government offices are allowed only very limited hours of air conditioning.  Nightclubs, bars, casinos and supermarkets are to close at 10PM. (we have 24 hr supermarkets)

Roberto explained that some of the problem is the harvesting of trees in the mountains. Without the trees, the earth is bare and water just runs off it. Trees help the water soak into the ground. This water runs into the streams slowly over a longer time, and the rivers are much less likely to run dry in dry weather. The rivers are dry now though, and this is also a huge problem for the Indians who rely on the rivers for fish, and the water for farming and drinking.

A while back I read something about a big meeting with government officials, the people who want to protect the environment, and people who want to harvest lumber.  The officials became convinced that harvesting lumber is a bad idea because of these water concerns, and will not allow the harvesting of trees to continue.  I hope this is true. This area is growing rapidly and adequate water is going to be more and more important. Many also say that part of the problem is climate change, and this has caused this last summer to be usually hot, dry, and windy.

Roberto explained his thoughts about the loss of trees in his normal speaking pace, in Spanish, and I am really happy to say that I understood pretty much everything he told me! Lately I have been feeling like my Spanish is getting better. I’m sure there will be another day when I can’t seem to understand a thing and that will knock me down a peg or two, but today I think I’ve got it going on 😀

I am also thankful that our water seems to be doing well here, and it’s been quite a while since we have had a water shutdown in the neighborhood. Hopefully the electricity will hang in there too. For me, no electricity means no internet and no communication with the US. For the country, no electricity means a multitude of problems.

Ahh, I see Zemanta has found a news article on this subject

We live in David, Chiriqui Provence, Republic of Panama! This blog is about some of our experiences in our new country.
View all posts by Kris Cunningham →
This entry was posted in expat, expatriate, Panama and tagged Cattle, Chiriqui, Chiriqui Province, David, Environment, expat, expatriate, Hydroelectricity, Latin America, nature, Panama, water. Bookmark the permalink.

12 Responses to Cows in the Neighborhood | Water and Electricity Problems