A Visit to the Finca (Farm)

My friend Cedo has a farm in Cuestra Piedra. She grew up in that area. Her mother in law was one of the first eight families to live there, and she named the town. I am starting to learn a lot about managing a Panamanian farm.

The farm has dairy cattle, chickens, pigs, geese, plants for cattle food, and some fruits and vegetables. It is not currently producing many vegetables because that land is growing a cover crop that will be plowed back in to renew the soil. There is an Indian family (a man, women, and their three young sons) living on the property, and the man does the daily work.

I am seeing the reality of living without a car and doing everything on foot or by bus. I am also starting to learn about the reality of managing a farm.

Every week Cedo must go to the farm to pay Isidro, the Indian man, and give him directions. He has worked there for most of the last nine years, but she still has to write clear directions – on Monday do this, on Tuesday do that and this other thing, etc. He speaks the indigenous language and doesn’t always understand everything in Spanish so instructions must also be written.

The cows must be milked twice a day. The milk is stored in a refrigerated tank, and a refrigerated truck comes every other day to collect the milk and take it to the dairy. One day when we were in Conception together she gave some cash to another man, and explained that he also has milk collected with hers so she had to pay him for his share.

If anything else goes on at the finca she has to spend more days there. A couple weeks ago she was up there every day to watch the man with the tractor who was plowing and planting food plants for the cows. She said if she doesn’t keep an eye on him he may charge for more hours than he actually works (we gringos think we are the only one cheated but this is hardly the case).

In addition to actually going to the finca, she must take the bus to Conception to buy feed for the animals (the company delivers it), go to the dairy cooperative for salt, minerals, medicines, or anything else the animals need. Last week she went to a meeting at the dairy where a vet gave a presentation on caring for cows and the best food for optimum milk production. I’m sure there are more activities that I have yet to learn about.

The three little houses in front of the finca are rentals. One is recently vacant, and another will be soon so they need to be repainted and cleaned up for another tenant. The third is the family home so it has been unoccupied for some time. She hopes to get enough money from the other two rentals to buy materials to rehab the larger casita so it can also be rented.

I’m tired just thinking about it! This doesn’t count going to Pricesmart for the 20 pound bag of soap to clean the milk tank because it’s the only one that has no perfumes or other unsuitable ingredients. She also has to do the usual things like paying bills, going to the supermarket, church, the doctor, etc. I’m sure there is more that I don’t even known about. Being a farmer is a lot of work, and she is probably 4″ 10″ and in her 70’s, and does it all on the bus. Money is very tight so taking a taxi is too expensive.

I’m glad if I can drive sometimes and help her get a few things done more easily. She is a great friend and we always have fun. She has taught me many things about the area, told me so much about the country, the culture, and the people, and all the Spanish conversation has helped me enormously. I also find it very interesting to get a first hand look at her life and the management of the farm. For us, $2 for a taxi is no big deal. For her, she couldn’t buy a papaya because she wouldn’t have had enough for the paint. It makes me thankful to have the resources we have, and also thankful to have Cedo. She insists that we are family so I insist that she is my Panamanian sister, and I like having a sister here.

You know you are at the finca when you see the three casitas.

Head up the road to the main part of the farm 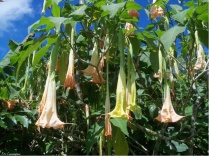 There are beautiful angel trumpets along the way. 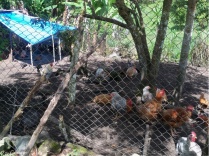 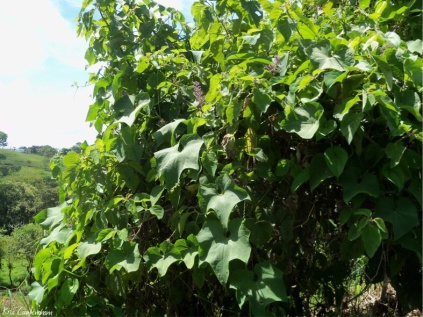 Chayote vines, source of the great squash type veggies she keeps sharing with me. 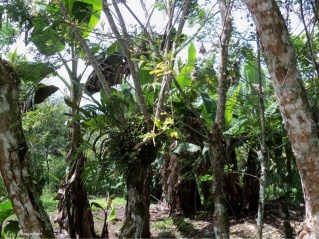 A few of the banana and plantain plants on the property

These piglets seemed excited that I was visiting them. Cedo explained that they have to stay in their area or they create havoc and destroy/eat everything within reach. 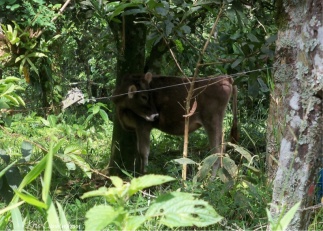 This calf was in a separate area. When it is bigger it will be put in a pasture next to the others and finally, when full grown and able to hold its own, it will join the herd. A calf is separated from the mother a few days after birth, fed milk for a month. The grazing and regular food is added. After three months the calf is weaned off the milk. The mother will produce milk for two years, and the she will be bred again.

Squash plants near the caretakers house

One of the noisy geese 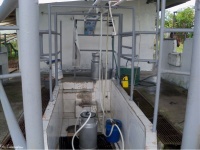 The milking area. There are two milking machines that will milk a cow is about 10 minutes. There are 15 cows who are milked twice a day.

Cedo checks the milk storage tank at her farm.

Cedo with a couple of her cows 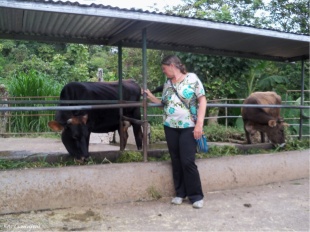 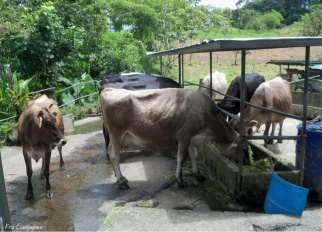 Before the milk is in the tank, it is in these containers.

A poster about preventing mastitis was hanging in the milking area

Cedo pointed out these beautiful flowers. What a lovely color.

We live in David, Chiriqui Provence, Republic of Panama! This blog is about some of our experiences in our new country.
View all posts by Kris Cunningham →
This entry was posted in culture, Panama and tagged chickens, cows, Cuestra Piedra, dairy cattle, farm, farming, finca, Panama, pigs. Bookmark the permalink.

8 Responses to A Visit to the Finca (Farm)