There is a bridge over the Pan-American Highway here, and we have enjoyed watching the process from breaking ground to the traffic now driving over the new bridge. It has been fascinating!

July 2013, big equipment showed up on either side of the highway.

These big diggers started digging holes on either side of the highway, and circular structures of rebar were left sticking up out of the ground.

The structures grew and became pillars of cement.

Then, the pillars became part of the supporting structures for the cross beams that were to come.

Supports were built on the pillars on either side of the highway, and then came the part I found most exciting! There is a large space up the road where they built huge beams of rebar and cement. Then, these had to be trucked down to the construction site and put into place.

The beams came down driven by a truck at either end, one going forward and the back one going backwards. The beam is so long you can barely see one truck on the right, and the one on the left is hidden behind the crane. Imagine the skill of these drivers! 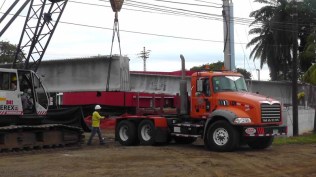 The beams are then lifted off the trucks on either end by two cranes.

The beams are carefully lifted up and put in place on their supports. 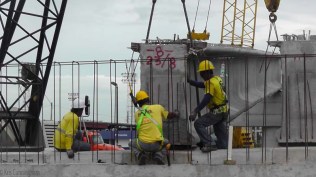 What an exacting process! Each one was carefully put in place by the crew of workers.

Beam after beam was brought down and put into place, and the bridge started to take shape. Those piles of flat pieces of cement were later used to span the spaces between the beams, and became the foundation of the surface of the road.

The same process went on over on the south side of the highway.

More and more beams were put into place.

The day arrived when it was time to divert traffic and put the beams in place to span the highway.

One by one the beams were put into place, and then large, flat pieces of cement were placed on top to span the spaces between the beams. These became the foundation for the surface of the road. 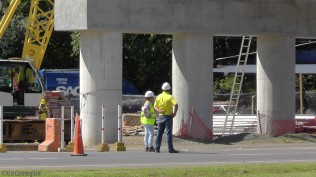 The workers were men, but women were also represented in the supervision and engineering.

Supports were added along the sides to make a walkway for the workers. Here, welding equipment is being lifted up to the bridge.

The cranes were kept busy bringing up equipment and materials. Here a big bundle of rebar is being lifted up to the bridge.

The pictures make it look like one stage quickly followed another but this work actually took months. It took a long time to put all the cement pieces in place for the road surface, build the walls along the sides, then finish and smooth everything. And, we were only looking from below and we didn’t see all of the details.

We enjoyed watching so much that this location was always a destination on our bike routes. The workers came to recognize us and always waved and greeted us, and I had some interesting conversations with some of them about the project. I usually asked when they would be finished and got an answer at least a month further out than the last time I asked. 😀 Work stopped for a while when there was a nation wide strike by construction workers but otherwise, there was always a lot of activity at the site and things steadily moved along.

The bridge has a road surface! It looks like things are really starting to take shape up there.

A lot of work is going on with the side walls and other things above that we can’t see. 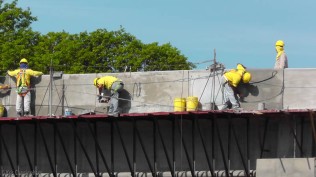 The workers with their yellow shirts remind me of worker bees. I was glad to see that they always had safety equipment when they were working. I don’t think I ever saw anyone up there who wasn’t fastened to something to protect them in case of a fall.

Work started on the approach to the bridge. The ground was dug down a long ways, and then rock and gravel was brought in, carefully layered and tamped down, over and over until the space had a very solid base. 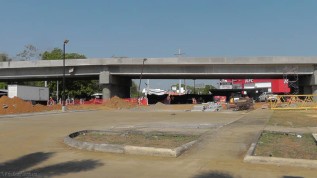 The side walls look done, and work seems to be concentrating on the approaches to the bridge.

The approach is looking ready for finishing!

The weeks go by, the work moves forward…  We drive over bridges every day without a thought to all the engineering, materials, and many many man hours that go into constructing them! We really came to admire the skill and dedication of these many workers.

One Sunday when the workers weren’t there, Joel ventures up on the bridge to check it out from up top! (shh, don’t tell the security guard who was keeping watch underneath 😀 ) 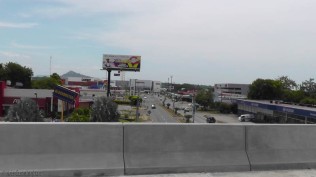 Our first view of the city from up on the bridge. 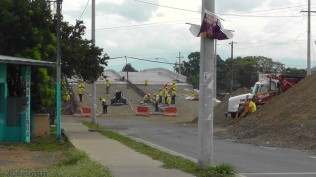 Work continues – getting the approaches ready for paving.

Cement is poured to fill in the gaps between segments. Walls on the approach section are in progress.

Cement is being poured on the approach sections. 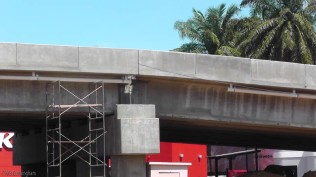 Pipes are installed to handle drainage when it rains. 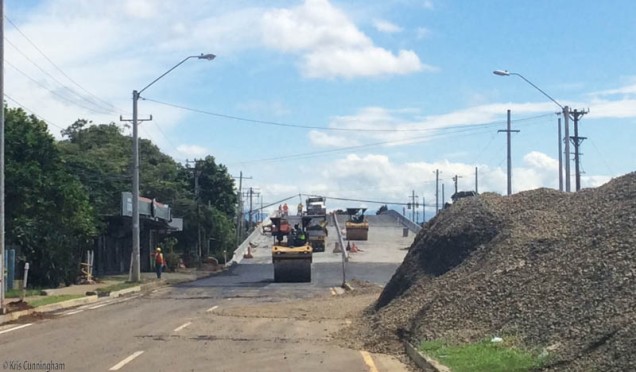 The weeks roll by, the work continues, and things continue to take shape. After the dramatic part of putting the beams in place the rest of it seems to take so long, but it all has to be done and done right. 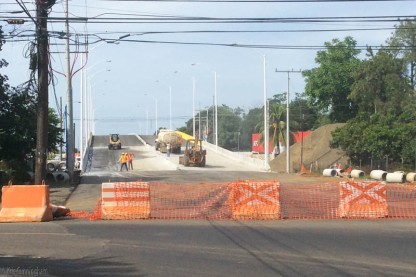 The paving looks like it is almost done, and yellow paint is starting to appear on the side walls.

Lights are being installed.

An on ramp is being built from the highway to the bridge.

The wall around the ball field is being moved and rebuilt to make room for another on ramp on the south side.

It sure looks done, but it still isn’t open. We saw later that they also installed barrier in the medians to prevent turning left on to the bridge for a few blocks on either side.

We went to Nicaragua in September. It looked so ready when we left that we were sure we would miss the opening. When we returned at the end of the month though, the taxi driver told us that it had just opened that day! We had such a great time driving over the bridge for the first time. How exciting after watching the construction for so many months. 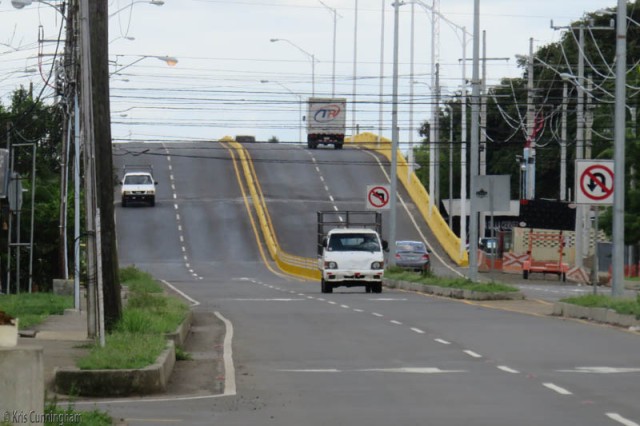 The next day I am on my bike, I ride down there and sure enough, the traffic is driving OVER the bridge!!

I think the bridge has really helped the traffic flow on the Pan-American highway which has always been extremely congested in this area. Now, people can come and go from the road down from Boquete towards downtown without ever having to go on the highway. The on and off ramps remain unchanged and I haven’t seen anyone working there for some time, but I’m sure they will get finished eventually. The important part is done though, and the bridge is in use.

It has been so exciting for me to watch this whole project from the start to the present. I can only imagine the satisfaction of the workers and they look at the bridge and remember the part they played in making it happen. We sure appreciate all their good work!

We live in David, Chiriqui Provence, Republic of Panama! This blog is about some of our experiences in our new country.
View all posts by Kris Cunningham →
This entry was posted in Miscellaneous, Panama and tagged bridge, construction, David, overpass, Pan-American Highway, Panama, Via Boquete. Bookmark the permalink.

8 Responses to Building a Bridge