Posted on September 20, 2014 by Kris Cunningham

A family in the neighborhood makes nacatamales every Friday and they are wonderful!

A nacatamale is a traditional dish of Nicaragua and Honduras. This family makes two kinds, one with masa (corn) and pork, the other with rice and chicken. Like tamales in other countries (which are a bit different),  they are a lot of work. They are often made for holiday gatherings and many family members participate in the preparation.

I thought it would be great if I could learn to make these nacatamales so I asked if I could come and help, and they graciously agreed. So, Friday morning I showed up at the house. Julia and her daughter Amarelis had already done some of the work. Bundles of plantain leaves had been boiled to soften them, and they were preparing the masa. 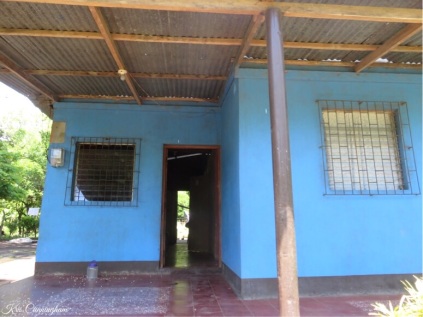 The house of the nacatamales! 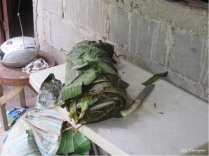 The masa and other ingredients ready to go

I am not exactly sure about the corn and masa part. It was explained that the corn is cooked with “cal”, and from my research I understand that the corn is cooked with lye or wood ash which is very alkaline and changes the properties of the corn.  Then it must be boiled again with clean water. One can also buy corn flour that has already been treated in this way and which is recommended for nacatamales by many recipes found on line.

When I arrived they were mixing the dough, adding Maggi flavored bullion powder, oil, vinegar flavored with onions, and milk until it was the flavor and consistency they wanted, a bit firmer than mashed potatoes. They also had all the ingredients ready – sliced onions, tomatoes, green peppers, potatoes, pieces of pork soaking in flavored vinegar, rice soaking in water, and springs of herba buena or mint. 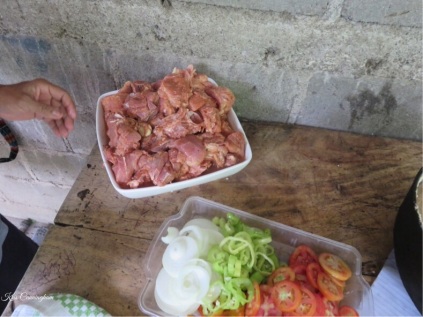 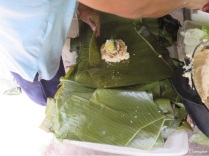 Now it was time to assemble the nacatamales. First, plantain leaves are selected. Then a large scoop of masa is put on the leaf (smooth side up), followed by a piece of meat, a bit of onion, pepper, tomato, potato, a bit of the soaked rice, a sprig of mint, and a bit of the juice from the meat. Then the whole thing is wrapped up in the leaves and tied with strips of “bark” from the plantain trees like a nice little package. One must be careful to have no sharp bones sticking up to make a hole in the leaves, and don’t tear the leaves while you are putting the nacatamales together. 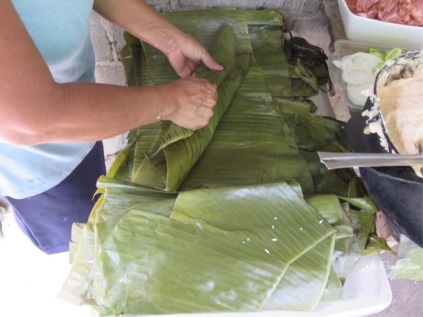 Wapping it up in the leaves

The first one is ready to tie 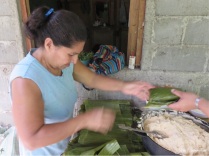 Handed off to Amarelis for tying. This team had obviously worked together a lot.

Amarelis ready with the ties

After showing me how it was done a couple times, it was my turn and I wrapped the rest of the nacatamales.

Now it is my turn. Selecting leaves and not tearing them was the hardest part for me

I had a great little assistant, Amarelis’ adorable little boy. (Photo by Amarelis)

Yeah, i made one! (Photo by Amarelis)

After a while we had a pretty good pile of nacatamales ready to cook. This is very low season for tourists so sales are down, so they were only  making the masa and pork nacatamales today. But still, they estimated we had made about 50 of them.

As far as I can tell there are no cooking facilities in the house. All cooking is done outdoors over a wood fire. It is more work but there is nothing like the flavor of food cooked over wood. It didn’t take Julia any time at all though to get a fire going. 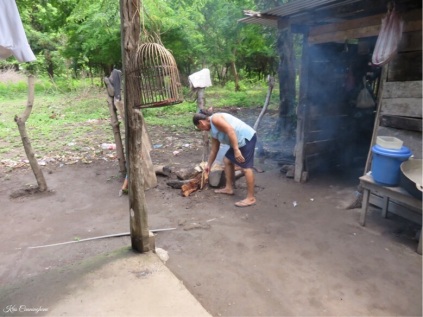 Julia gets the fire going 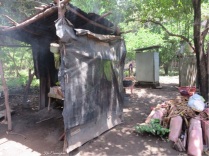 The backyard and outside cooking area

They will be boiling here for 3-4 hours

When we were done, nothing went to waste. Leaf scraps were fed to the pigs and ducks, and the leftover rice to the chickens. Everything else was put away for another day. 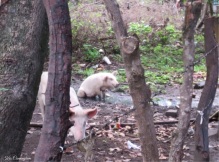 Pigs in mud! They had a couple cute ones but they didn’t know me so ran away if I came close

I think this must have been something new for all of us! Amarelis took photos of the gringa cooking traditional Nicaraguan food to post on facebook (and I now have a new Facebook friend), and as you can see, I also took a number of photos of my new experience.  Not only do I know a lot more about nacatamales, we had a wonderful morning of conversation and getting to know each other which I enjoyed every bit as much as the cooking.

We live in David, Chiriqui Provence, Republic of Panama! This blog is about some of our experiences in our new country.
View all posts by Kris Cunningham →
This entry was posted in travel and tagged cooking, Food, Nacatamales, Nicaragua. Bookmark the permalink.