I had been cycling for many days, occasionally taking a bus but mostly making my way on the bike. When I started it seemed like it was going to take a long time to get anywhere, but later when I checked a map it was hard to believe I was in the middle of the country, and then I was getting close to the Nicaragua border. 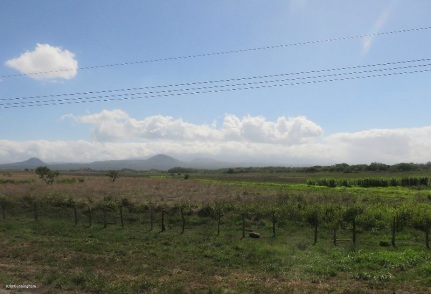 We started by driving through more open green spaces and agricultural areas.

its really pretty in this area 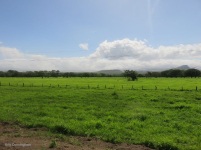 The last leg from Playa Hermosa though looked questionable. I knew it was more than I could bike in one day but there didn’t look like there were any towns or possible places to stay along the way. I have a tent for emergencies, but spending the night in the countryside in a tent wasn’t really what I wanted to do. So, I decided to take a bus to the border.

After a while the land turned to parts that looked untouched

it was very pretty, but if I had needed anything, even a drink or a snack, there was nothing available.

I was very glad I had made this decision. I was correct that there was nothing out there but untamed land. There is the Parque National Santa Rosa, and then the Parque National Guanacaste. Beyond them is the town of La Cruz which might have a hostel or two but was definitely farther than I could ride in a day. I was safe and comfortable on a bus that would get me to the border in plenty enough time to bike from there to the ferry to Ometepe Island.

after a while it turned more jungle like with bigger trees

We made it to the border in a couple hours, a distance that would have taken me a couple days to cycle. It was also hot, windy, and sunny so I know the weather would have been a challenge. With the bus though, I was at the border fresh and ready to go.

The border crossing went wonderfully smoothly. I paid my $7 exit tax out of Costa Rica, took the receipt to customs where there was no line, and was stamped through immediately. Then I rode a short ways to the Nicaragua border where I was shown to the first stop. They took my temperature by shining a little red light on my wrist, pronounced me fine and gave me a small piece of paper. Then I was sent to customs where I paid $1, I am not sure for what. I took that receipt, the filled out customs form, my health paper and again with no line, gave it all to the agent who asked me where I was going and stamped me through. The next stop was baggage check where they took one look at my loaded bike and just waved me through. The final stop was leaving the area for the open road where an agent checked my passport, asked where I was going, and welcomed me to Nicaragua as he sent me on my way. I don’t think it even quite noon and. I was ready to get rolling!

We live in David, Chiriqui Provence, Republic of Panama! This blog is about some of our experiences in our new country.
View all posts by Kris Cunningham →
This entry was posted in Costa Rica, travel and tagged bicycle, bicycle touring, Costa Rica, Nicaragua, Parque National Guanacaste, Parque National Santa Rosa. Bookmark the permalink.