My daughter graduated yesterday, and I have decided to allow myself one week to be a proud mother and brag to everyone in my path! 😀

The new graduate and her husband.

She has worked very hard for a long time. Elizabeth started school (at her insistence) at age 4. She has been a dedicated student, always focused, always persistent, and always self motivated. She thinks I’ve been a positive influence but she has done the vast majority herself. I never told her to do her homework or asked her to go to class. I tried my best to provide good opportunities, and then tried to stay out of her way while she built her own life. 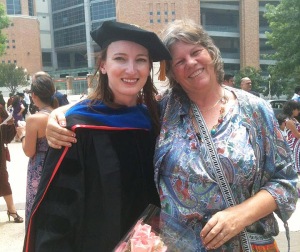 Elizabeth and I after graduation (photo taken by my sister)

Elizabeth was at the top of her class in high school, was an award winning cross country runner, and an outstanding oboist in the Florida Youth Symphony, all while taking AP and honors classes, and working part time after school. Her excellent grades earned her an undergraduate degree in physics at Florida State Universtiy paid for by the Bright Futures program, and then a masters and doctorate at the University of Texas paid for by her work in the physics department.

Elizabeth and Joel, who has been there every step of the way.

There was a party at Elizabeth’s house after graduation and I had an interesting conversation with one of her professors, another one of the few women physicists.  She said Elizabeth had not only done an outstanding job, but she was always kind to her coworkers, helpful and patient with other students, and never arrogant in spite of her considerable expertise. She said Elizabeth holds great promise as a scientist, and is also a wonderful role model for other young women considering a career in science. Because of Elizabeth’s success in the program, UT is more likely to consider other women interested in entering the physics program. 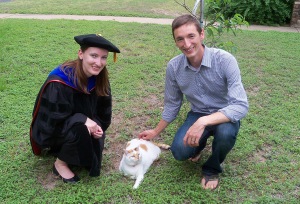 Elizabeth and Drew, and one of their three cats.

Elizabeth is married to Drew, also a very intelligent, capable, and successful scientist who works in the computer field. Next month they will be moving to Seattle, her to start her job at Microsoft, and he to work for Redfin. It will be very interesting to see how the next stages of their lives unfold!

Of course, there are more pictures….

The crowd waits outside the auditorium. There were many ceremonies throughout the weekend. This one was for all the doctoral candidates.

Bass Auditorium is a big place, but it was totally packed with excited family and friends! The man next to me had traveled all the way from Nigeria to see his son be awarded his PhD in Engineering.

The graduates file in. We didn’t think we would be able to spot Elizabeth, but we did! All the graduates were turning around, looking for family and friends, or checking their phones. 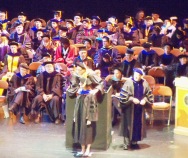 The stage was full of faculty and university dignitaries, including the president of UT! Elizabeth’s name was finally called, and she came on stage to have her hood placed over her head.

Elizabeth makes her way across the stage, receiving congratulations along the way.

After the ceremony, the crowd gathers in the courtyard where family and friends can look for their graduates.

Elizabeth with her colorful hood on her back, with her husband and my sister, who was able to come down from Dallas for the event. Her son is also a UT graduate! 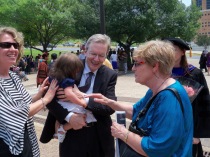 Elizabeth’s father, his wife and daughter, and Elizabeth’s mother in law were also here for the ceremony.

The only person missing was Elizabeth’s sister who has a brand new baby, but she was definitely here in spirit. We kept in close touch by phone, sent pictures, and carried her around the party by iPad so she could talk to everyone and attend from afar. Technology is a wonderful thing!

My week of bragging is up on Tuesday, well… bragging about this anyway. Tomorrow we’re going to CA to see my other daughter and her husband, and meet the new baby. There will be more news and pictures! We won’t be back in Panama for a couple more weeks but I will keep in touch from afar – maybe work on the website, study some Spanish, and do some other things between helping my daughter and son in law,  and spoiling my new grandson. Whew! What a month this is turning out to be.

We live in David, Chiriqui Provence, Republic of Panama! This blog is about some of our experiences in our new country.
View all posts by Kris Cunningham →
This entry was posted in travel and tagged Austin Texas, graduation, PhD, physics, travel, United States, University of Texas. Bookmark the permalink.