This interesting photo has been making the rounds lately on the internet and Facebook. 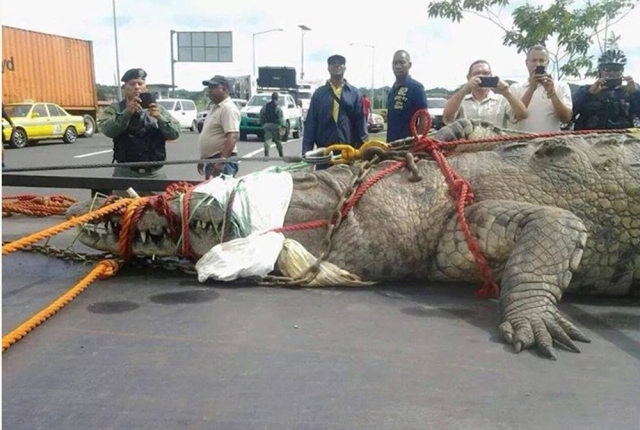 Word is that this crocodile was caught in the Panama Canal near Colon at the north end of the canal. I do not know if it is true or not, but it is known that there are large crocodiles in that area. The picture is a bit tricky because you don’t see it right away, but the crocodile is actually on a flat bed truck so the people behind it look deceptively small. Truck or no though, it definitely is a large crocodile and I would not want to encounter it.

This particular bit of news has been interesting to me and my blog because it caused a huge spike in my blog traffic and surprised the heck out of me. People have been searching for information about crocodiles in Panama on Google and other search engines, and an old blog post about crocodiles kept popping up.

We have not seen any crocodiles in this area. The closest is a small caiman in the river and the neighbors said even that is very unusual. But, after living around alligators in Florida we are very used to being careful in fresh water. It is said that the crocodiles here are most likely to be found at the mouths of rivers where the fresh water flows into the sea which happens not too far south of us in Pedrigal.

I saw headlines on the PanamaGuide.com that the crocodile has been released. Unfortunately you have to pay if you want to read more than the first couple lines of the article, and I cannot find any other information to substantiate this news. I do hope though that if this crocodile was indeed captured that it has been released. Of course I don’t want any loss of life from wildlife but hopefully with precautions and education, we can all manage to live peacefully with the diverse wildlife that is found in this part of the world. This is one of the things that makes Panama so fascinating.

Here’s another picture of the crocodile I found on line. Don’t go swimming in the Panama Canal!

We live in David, Chiriqui Provence, Republic of Panama! This blog is about some of our experiences in our new country.
View all posts by Kris Cunningham →
This entry was posted in Panama, wildlife and tagged Crocodile, Crocodiles, Panama, the Panama Canal. Bookmark the permalink.

8 Responses to Crocodiles in Panama