Posted on January 2, 2015 by Kris Cunningham

Celebrations in Panama are always fun and interesting, and New Year’s Eve is no exception. There are the expected midnight parties and lots of fireworks, of course, and something else I find especially interesting – the muñecos.

A muñeco is an effegy, often of a political figure, but it can be of absolutely anything the person wants. It can represent good things and wishes for the coming year, but it often represents frustrations and bad things from the past year which are set on fire at midnight and go up in smoke. I can think of a few bad years in my past that I would have loved to watch go up in smoke!

I think the interior provinces of Panama participate in this practice more, but I did see quite a few muñecos in our area, including one in our neighborhood that was great fun.

This was in town on a side street.

There was one in front of this upscale home with some huge Christmas decorations.

Seen at a construction site on the way to Boquete 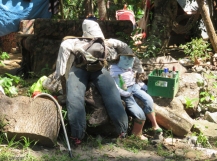 There is a back street north of town where some indians live in a very simple house by a creek. This was out in front of their place.

I’m not sure why many of them have beer and liquor bottles. 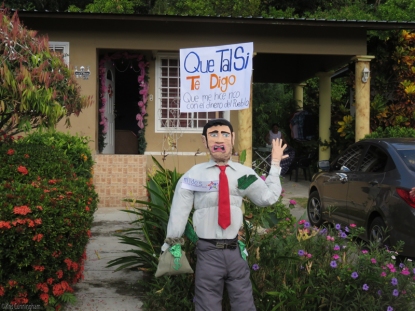 This one was in our neighborhood. “What if I tell you that I got rich with the people’s money”

Close to midnight, the muñeco was put in a pickup and slowly paraded around the neighborhood with a caravan of vehicles. Someone was behind the muñenco making it wave its arms, and there was much honking of horns and hollering.

As I snapped this photo there was another caravan going down another street, apparently from a nearby neighborhood.

After the driving around, the muñenco is taken out of the truck and everyone gets their picture taken with it.

Even the neighborhood stray dog gets in on the action (sorry, took me a bit to get my flash in action)

I was there, so I was encouraged to get in on the photo action. 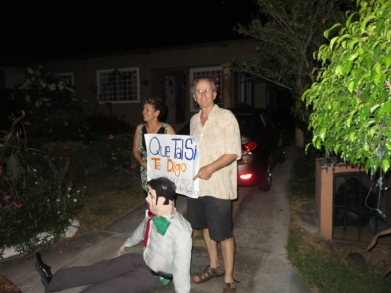 Joel also gets a photo

At midnight, the muñenco is set on fire. This looks a bit creepy so remember it is only straw, old clothes, and firecrackers.

and rounds of fireworks crackle and pop!

As the evening went on, there were really beautiful fireworks going off in many directions.

People here can have the big fireworks that are only allowed for professionals in the US. I appreciate everyone who set off fireworks because there were so many really beautiful ones to see!

Something new I hadn’t seen before were these balloons. We saw some floating above the neighborhood, and then the neighbors down the street set a few off into the night sky. It was so beautiful to watch these balls of light and fire gently drifting overhead through the dark sky.

There is an interesting article HERE about the muñencos in Panama. I’m sure a Google search will bring up more if you are interesting in learning more.

Once again, it was a great neighborhood party. We were greeted, kissed on the cheek, and wishes Feliz Año Nuevo by so many people, and I had a great conversation with a new family down the street that I didn’t know before. If you want to have a good time here you only need to walk out your front door. That’s one of the many things I love about the Panamanian people.

We live in David, Chiriqui Provence, Republic of Panama! This blog is about some of our experiences in our new country.
View all posts by Kris Cunningham →
This entry was posted in culture, Panama and tagged culture, muñenco, New Years Eve, Panama, traditions. Bookmark the permalink.