Posted on February 3, 2014 by Kris Cunningham

Yesterday we decided to explore Puerto Armuelles. It took us slightly over an hour to get there from David. We went to Paso Canoas on the Panama – Costa Rica border and then south, on good roads all the way.

I learned most of what I know from this article HERE. Chiquita Banana, a part of United Fruit used to have banana plantations in the area. Supertankers with Alaskan oil also used to come to the deep water nearby to have their oil loaded on to smaller ships that could pass through the canal, and then reach refineries on the gulf coast of the US. Since neither of these activities are going on now, the area is quite depressed.

But, there are plans in the works. There is a very good two lane road now, and they are currently working very hard to widen it to four lane. According to the article there are plans for a deep water container port, a cruise ship port, a marina, and storage facilities. The road will be part of a “dry canal” connecting these facilities to Chiriqui Grande on the Caribbean side of Panama.

Also, the government has forgiven the crushing debt of the banana workers cooperative that formerly managed the banana plantations, and has taken ownership of the plantations. It wants to sell them to companies who will employ the most workers.

It will be very interesting to see what goes on in Panama in the coming years. Is the new four lane road between David and Boquete part of this “dry canal”? If so, are they going to build more road past Boquete to connect it with Chiriqui Grande? Will there also be a port at Chiriqui Grande? All this road building is great but are they also going to do something about the state of the PanAmerican Highway between David and Santiago? It is the lifeline through the country and is in great need of repair.

Anyway, here are some of the photos I took of Puerto Amuelles so you can get an idea of what it looks like now. We thought about exploring more of the area to the south but we only found a bumpy gravel road. We were able to drive a ways to the northeast but soon found ourselves again facing only a gravel road so we only saw the main part of town. (our car isn’t the gravel road sort of car) Almost all of the photos were taken from the car so apologies for the quality of some of them.

We drove through flat farmland with crops and cows. This looks like milo, something I haven’t seen since I lived in Kansas.

We saw some bananas but nothing like what I expected after reading about the many banana plantations. 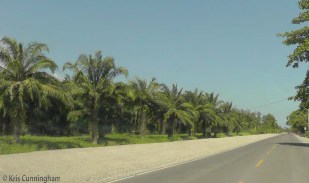 These look like the palms we saw in Costa Rica that are grown for the production of palm oil. 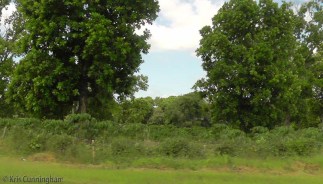 We saw a few fields of young papaya plants.

The road is very good and traveling was easy with only an occasional slow down for the construction work.

This truck was loaded with people laughing and talking. We also saw a lot of people on bicycles. 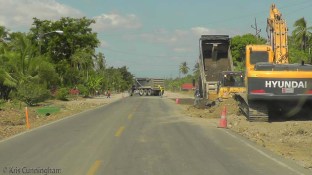 There is a lot of road work going on! 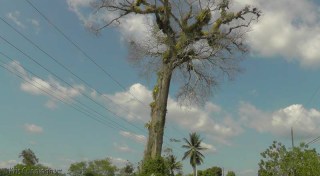 There is a police check point on the way with this fantastic tree towering overhead. The hottest, sweatiest policeman I’ve seen checked our ID on the way down, and on the way back they just waved us through.

We passed an old train depot on the way. I believe it is left over from the banana business of United Fruit.

There were also old train cars parked by the train depot.

We arrive in town.

We stopped at this very cute park on the waterfront. 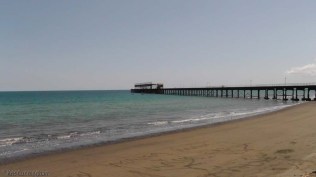 I thought it would be nice to walk out on the pier until we got close and saw that it was in really bad shape. 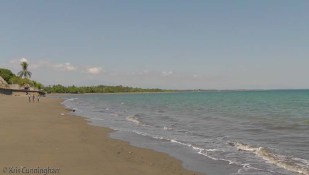 I thought the beach looked really pretty, and was free of dangerous waves and rip currents. When we told someone here where we went though, he said you should never swim there. The houses don’t have sanitation and the sewage is drained directly into the water so it is very dirty.

After our picnic in the park, we went driving around town.

One of the nicer areas of town.

We saw many of these interesting two story houses with a lot of outdoor living space underneath on the ground floor. 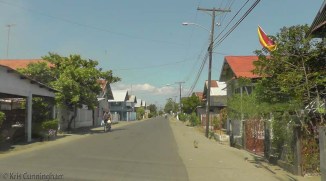 There were people on bicycles everywhere. 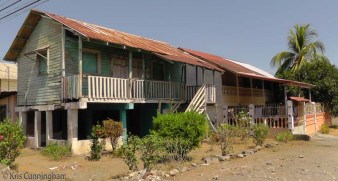 One of the most spectacular bougainvilleas in bloom that I’ve seen.

More downtown (sorry, the sun was hitting the windshield ) 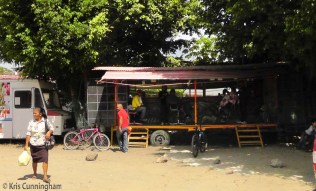 People were getting their hair cut in this trailer.

We spotted a Romero’s in town.

We didn’t see the hospital but we saw this sign that says good things are going on there.

Northeast of town we saw this “compound” heavily fortified with fences and razor wire.

The gate to the compound was open but we didn’t drive in.

So, that’s all I know about Puerto Armuelles. Please feel free to correct or fill in any information. I think the area has a lot of potential. There is a lot of waterfront with development possibilities, a good road, a big enough town to provide daily necessities and easy access to Paso Canoas and David. Right now it is an area in need of revival. But, in the future it might be something to consider for people who want to be close to the beach.

We live in David, Chiriqui Provence, Republic of Panama! This blog is about some of our experiences in our new country.
View all posts by Kris Cunningham →
This entry was posted in Exploring the Area, Panama and tagged Chiriqui, Panama, Puerto Armuelles. Bookmark the permalink.