Friday is for Food

Posted on September 13, 2014 by Kris Cunningham

Our adventure continues house sitting on Ometepe Island, Nicaragua. It is interesting here that so many people come to the house selling things. A guy came by a few days ago selling tilapia fillets which I am glad we bought because they were great. Another guy came with little pastry/cookie things which I don’t need, so he will be happy when the folks come back. Another guy was selling plastic chairs.

Today we knew the gardener would be here and it is pay day. We also knew the vegetable truck would be coming and I had a list! If I remember I bought 4 carrots, 6 chayotes, 3 cucumbers, 6 tomatoes, 2 pounds of onions, a cantaloupe, a pineapple, 6 beets,  and a bunch of bananas. I think that was all, and it was about $12.

The veggie guy arrives with his truck. He told me he used to have a horse but now he is doing better so he could buy a trucks. He had to sell the horse to pay for it but now he can go faster and carry more. 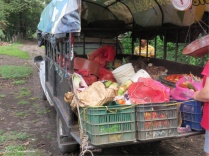 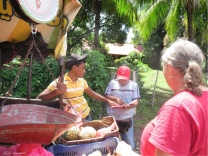 When we are done he writes every item in his little book and then totals everything up. He said he had a calculator but people would rather he did it by hand.

Once all the expected visitors had been here, I set out with Cappy for a walk. It seems to help to run off some of his energy, and sometimes he even manages to walk beside me like a good dog! 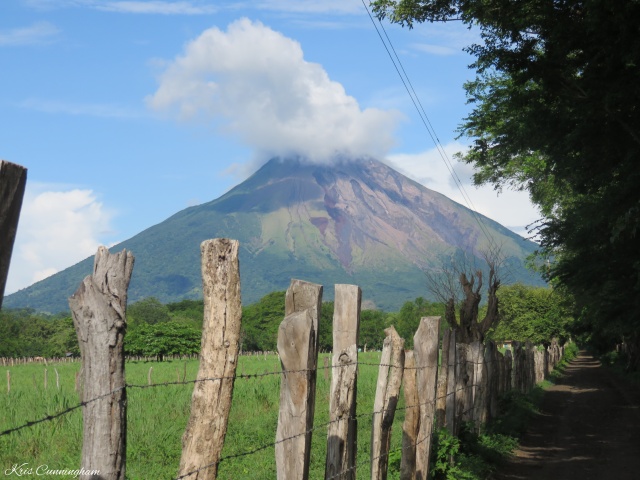 Today’s photo of the volcano

Then we had a few things we wanted to do in town, so we set off on the bikes. It’s like Panama a bit. We wanted a pump to inflate a flat tire on a bike. Nope, no such thing. We had checked with a few stores and bike rental shops and heard the same thing. If you want air go to the car repair shop down the street. There are no pumps sold on the island. But, an email with the homeowners and the right advice and voila, una bomba! We also learned that there is a guy who goes to Pricesmart in Managua every Tuesday so if we want something, we only need to ask on Monday and he will bring it back.

As we did our errands in town we saw the gray clouds over the volcano getting bigger and bigger, and a cool breeze started to blow. We took off at a good clip to make it home before the rain but didn’t quite make it, much to the amusement of some of the neighbors we passed on the way home.

My I got all wet but had fun doing it look.

Yesterday we ordered nacatamales from the family up the road who makes them every Friday. Just before we left on the bike one of the boys arrived with our order in a bucket obviously hot off the stove. They were too hot to even touch! So, when we returned from the bike ride we knew we had an excellent dinner waiting for us. 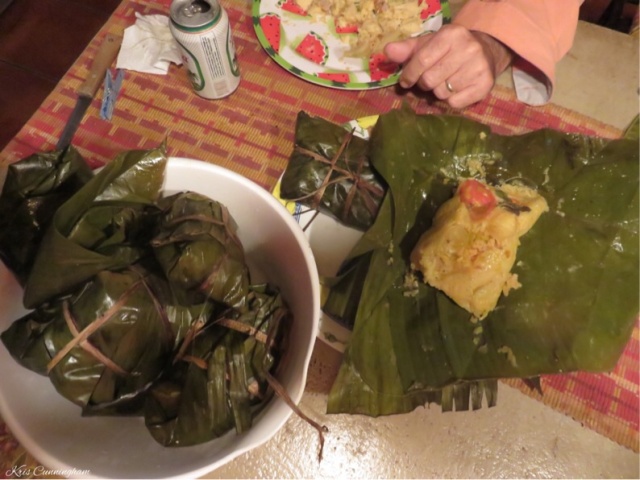 She makes two kinds, one with corn base and pork, the other with rice and chicken. Both are really good!

Next time I see the cook outside I am going to ask her if I can help her next week. I would like to know how she makes these. They are different from the Panamanian tamales and would be a great addition to my recipes. These, besides the rice or corn, and pork or chicken, they have slices of potato, tomato, onions, a leaf I can’t identify, and really yummy flavoring.

After dinner is relaxing time with a good dog and a good book. 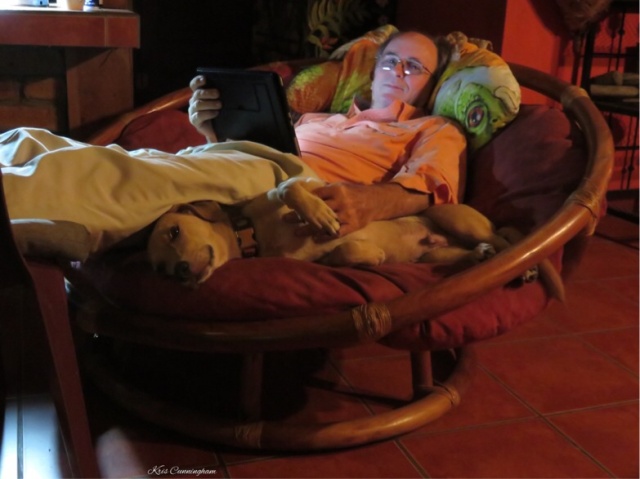 It is a rough life here

The final surprise of the night was something flying up under the rafters. At first I thought it was a bat but it didn’t fly like one. Then I realized it was a huge black witch moth, which I recognized because we had them occasionally in Panama.

So, another day on Ometepe Island, Nicaragua. Tomorrow we plan to do some more exploring, with the camera of course!

We live in David, Chiriqui Provence, Republic of Panama! This blog is about some of our experiences in our new country.
View all posts by Kris Cunningham →
This entry was posted in travel and tagged naca tamales, Nicaragua, Ometepe island. Bookmark the permalink.

3 Responses to Friday is for Food