We got so lucky today!! There have been bike races going on all week in the area, but I didn’t know exactly when and where so it was total luck today that we got to see the last stage of the race.

We were biking south and about to cross the Pan-American highway when we noticed a vehicle coming down the highway with lights and sirens, followed by a couple other vehicles and then, a whole group of bicycle racers!!

We continued on our way, happy to have seen them, and headed to the south part of town to visit a friend. When we arrived at the main road in south David, we again heard the vehicle with lights and sirens. Could it be the racers again? Yes indeed, and we were waiting to cross the very street they were coming down! 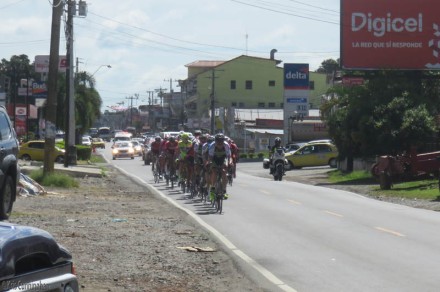 The bikers head towards us!

The first of them pass our spot.

Then more of the group passes us.

They are followed by vans and cars with extra bikes and some media.

The ambulance brings up the rear. I hope it was never used!

We were so excited to be right there on the race route! I’m so used to my dirt bike with its noisy tires, but when these bikes passed us they were silent – no tire noise, no sounds of metal, no heavy breathing, nothing, just silence as they flew by us.

Little did I know we weren’t finished yet. As we headed home I saw a crowd at the Parque de Madres (Park of Mothers) so we went to check it out. They were holding the final ceremonies for the winners!

When we arrived at the park there was a large crowd milling around. 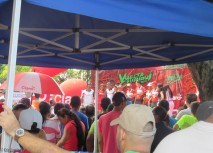 Award ceremonies were in progress on this stage. 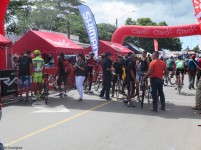 I’m guessing this was the finish line. 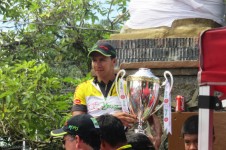 And, I’m guessing this man was the overall winner. 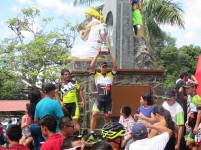 I wonder if the other man is the 2nd place overall winner. At one point they were holding up the cup together. I’m not sure why they “dressed” the statues in the park.

The race is called La Vuelta International a Chiriqui 2014, and it has been happening every year for 34 years. When I learned the name from the stage backdrop I was able to look up some information. This is no small or easy race!! I saw cyclists mentioned from Panama, Columbia, Ecuador, and Nicaragua. Another article said that at least six countries would be represented.

The event lasts 10 days with a different stage on each day for a total of 1069.8 kilometers.

I am so excited to have seen these men, and to think how strong they must be to have done all these races! I am excited and inspired. I didn’t see any women participating though, which I think is unfortunate.

Now that I know what to google, I am going to mark my calendar so I can watch more of this next year.

I got my information from Mundo_Panama, La Estrella, and the Claro Blog. Claro is one of the big cell phone providers in Panama and apparently a big sponsor of the race.

We live in David, Chiriqui Provence, Republic of Panama! This blog is about some of our experiences in our new country.
View all posts by Kris Cunningham →
This entry was posted in Miscellaneous, Panama and tagged bicycle race, cyclists, La Vuelta a Chiriqui, race. Bookmark the permalink.

10 Responses to Bike Racing in Chiriqui