A Chance Encounter with some Fantastic Bikers!

I was biking home Monday morning after a good ride, and I met three bikers at an intersection. They had baggage on their bikes and were obviously travelers. I greeted them, and they asked if I knew of a bike shop in town. This began a most interesting day!

We went to the bike shop, stopped by Colombia to check out their shoe sale, and then went to the supermarket, chatting along the way and getting to know each other. Then, we said goodbye so they could be on their way. But, it wasn’t long before the skies opened up and we had a major downpour, and I received an email. Could they come back to David and stay for a night?

What stories, so inspiring! I was really glad to have more time with them, and for Joel to get to meet them as well.

Mike is on the left. He is from Mississippi, USA. He has taken numerous bike trips, and on this one he has ridden from Mississippi down through Mexico and Central America. He is headed to Ecuador where, if I remember correctly, he has a job working on a sustainable agriculture project and writing articles about that and health related subjects. He will earn enough money to enable him to return and finish his degree in geology.

Elif is in the middle. She is from Turkey. She flew to Orlando FL, and then proceeded to bike west around the southern US and down into Mexico. She spent a year in Mexico recovering from a fall and a broken shoulder, and enjoying a relationship with someone she met there. From there she has headed down into Central America and plans to continue into South America. She has been on her bike for 7 months since leaving Mexico.

Alain is on the right. He is from France. He biked east into Eastern Europe and Turkey. He wasn’t allowed into Iran and Afghanistan so he flew over them, and then proceeded through India and then Asia – Thailand, Singapore, China, then flying to Japan, and then to Los Angeles, USA. He intended to bike north but by the time he got to San Francisco winter was coming and it was too cold, so he reversed direction and went south making his way through Mexico and Central America. He also is heading to South America, and he has been on his bike for 2 1/2 years!

Mike is 38, Elif 40, and Alain 41 though they all seem much younger. They met on the road at one point, then went in separate directions, and met back up again about 3 weeks ago. They all said they worked hard and saved money to fund these travels.

Before dinner though, they admired our area and eagerly accepted an offer of a walk in the woods which turned into a visit to the river as well. 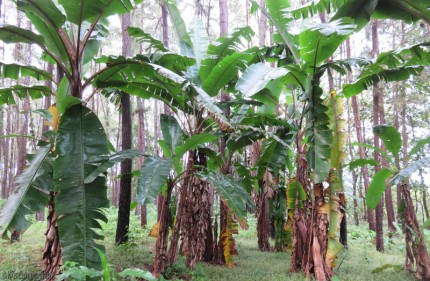 The woods and the huge banana trees were really beautiful.

Joel hangs out with our new friends by the river.

Elif and Alain take photos. After the downpours the river was active and muddy. 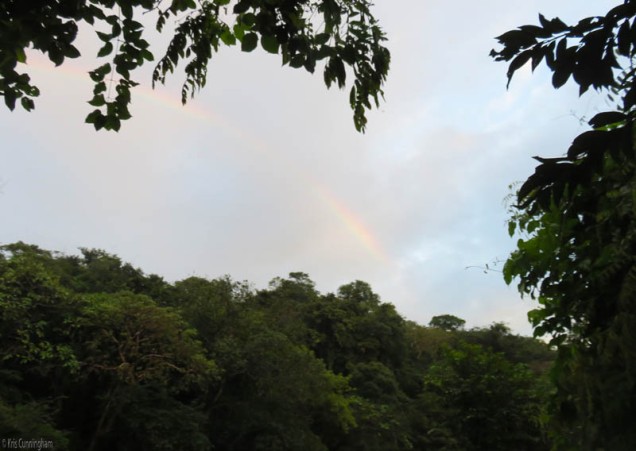 It’s a good day when there is a rainbow. And, it’s a good day when you get to spend time with very interesting people. We all had a good time putting a meal together, some Italian chicken by us, a rice and veggie stir fry by them, and a squash and plantain stir fry as well (Elif and Alain are vegetarians). Dessert was banana and jam sandwiches (which sounded interesting but I was good and didn’t indulge) We all sat on the terrace and ate and talked and told stories until bedtime. Then, they unrolled their sleeping mats on the living room floor and it was lights out, because the next day was an early morning (post to follow on another great day!) 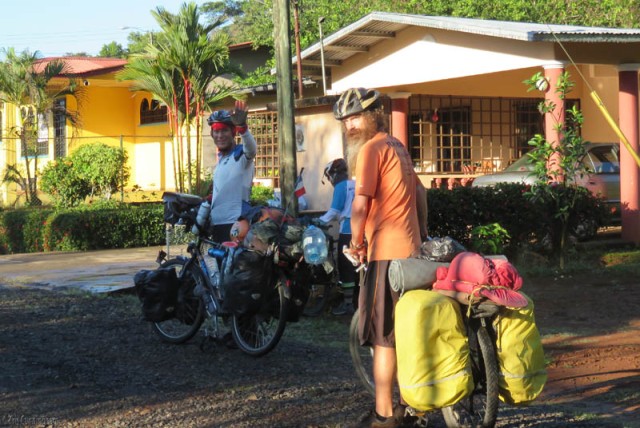 Here they are in the morning heading out again towards Panama City, where they plan to either take the new ferry or find other transportation over water to South America. I am glad we are Facebook friends now so I can follow their future adventures. How great that a chance encounter turned into such an interesting experience.

We live in David, Chiriqui Provence, Republic of Panama! This blog is about some of our experiences in our new country.
View all posts by Kris Cunningham →
This entry was posted in Miscellaneous, Panama, travel and tagged adventure cycling, bicycle, bicycle travel, cyclist. Bookmark the permalink.

12 Responses to A Chance Encounter with some Fantastic Bikers!