Visiting the New Locks of the Panama Canal

Last Sunday we had a fantastic opportunity! The ACP (Panama Canal Authority) opened the new locks to the public for one day only, and anyone who wanted to visit was welcome. I had seen photos and read articles, but to actually go to the construction site was too exciting to pass up. Next month they are going to start filling the locks with water so this was a once in a lifetime opportunity.

It all started when someone posted this article on Facebook http://www.prensa.com/sociedad/visita_a_esclusas_0_4201080042.html  All we needed to do was show up at the designated parking area wearing long pants and proper footwear for a construction zone.

So, we took the bus to Panama City on Saturday, booked the Allbrook Inn for a couple nights, and contacted Luis Arce to pick us up and drive us to the site.

There was a ton of traffic and it took us two hours of stop and go to arrive at the parking area. 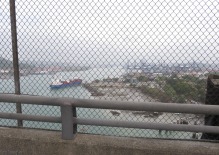 We went on the Centennial Bridge over the canal.

We made it to the parking area! It was full though so they directed us to the Comisariato Aeronaval nearby. 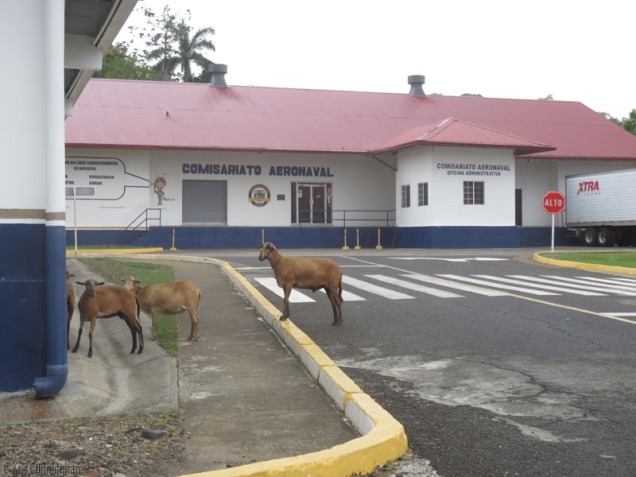 I’m not sure what the goats were doing there but they acted like they belonged. Maybe they were part of the lawn maintenance team. They were there when we returned also.

The line goes all the way down the street and around that parking lot you can see in the distance.

We made it to the parking lot!

This bird was very upset with anyone who walked across the field by the parking lot.

A few people, like this lady, went over to the bird. It was fine as long as you faced it, but when you turned to walk back the bird would attack.

According to my bird book, this is a southern lapwing.

More and more people kept arriving, and the line stretched farther down the street.

We’re almost to the buses!

We were in this line about two hours before we made it to the bus, most of it in light to heavy rain. People were upbeat and cheerful though and didn’t seem to mind getting wet. Here though the rain is warm and getting wet is a common occurrence.

The bus took us on a short ride, and then let us off in another parking lot where there was a huge line! 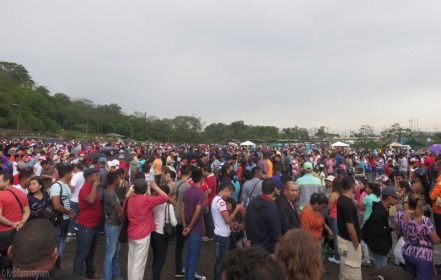 The line looked really huge but it moved fast and took only about an hour.

The last part of the waiting was in this covered area but by now the rain was letting up.

Then, finally, we made it to the end of this line, passed through the entrance, and then we were loaded on to more buses.

In a few minutes we were obviously getting into the construction site.

And, then, we were THERE!

The bus drove down into the lock and let us off.

Joel is excited too! 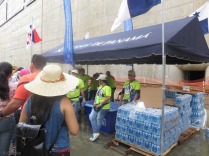 This is one of many water stations we saw throughout the day. The staff all had t-shirts that said – I am a part of history! They were very friendly and seemed happy to help guests and be a part of this day.

I was wet and bedraggled too, but really happy!

There were various spots for photos. Here a staff member is taking a photo for these folks in front of one of the spaces where the water goes in and out of the lock. The sign says – A day in your history.

The most popular photo spot was in front of these massive doors. 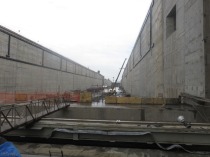 This is looking south to the other end of these locks.

The huge doors run on these tracks.

There were many police, soldiers, attendants, and other personnel keeping order (not that it was a problem. Everyone was pretty mellow)

Looking north from where we were, we could see more buses coming down into the lock. 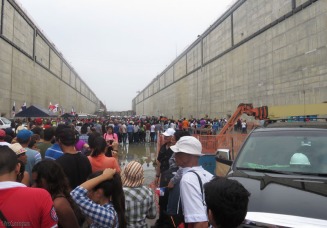 Everyone was excited to see this guy, the director of the canal. (white hat, black shirt) 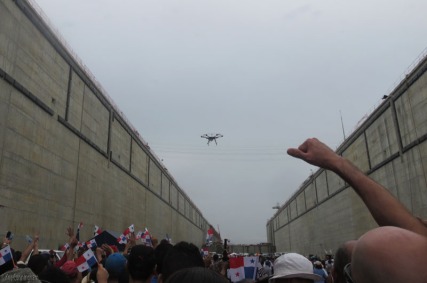 There was a drone making passes overhead, and when it went over everyone would cheer and wave their flags.

The director stopped for photos with many people.

Finally, after a wonderful visit and many photos, we got in line for the next bus.

I believe I have identified the director in the white hat and black shirt as Guillermo O Chapman, Jr.  and clicking on his name will take you to some information about him.

We boarded the next bus and headed to the “mirador” or look out spot. Every bus had someone in a lime green t-shirt cheerfully telling us where we were going, what we were going to see, and any other information that would be helpful.

We passed a few of these big trucks used for hauling dirt. 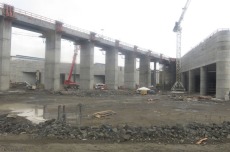 Another bridge, and I’m not sure if this is part of the chambers and holding areas for water. These locks will reuse water because they use too much to fill them from the lake and discard it all downstream.

Buildings under construction along the way. 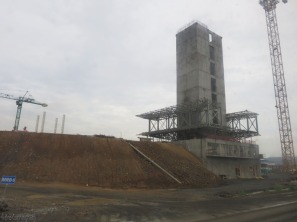 And, a tower is going up.

We approach the other end of the locks.

At first I thought we must be at different locks, until I looked way down in the distance in one of these photos and saw we were actually at the other end of these same locks. The size and scope of all this is pretty incredible. 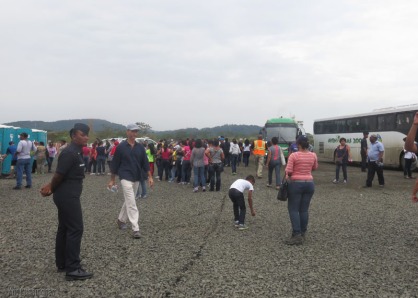 We are dropped off at another spot with people to guide us, more bathrooms, and water stations.

Behind us is the canal currently in use. That black ship was making its way south towards the Pacific. 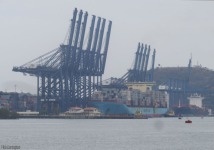 There was a big container ship on the far side loaded with containers.

They had constructed a look out area for people to see the site and take photos.

Here is the view from up there! It wasn’t until I got home and looked at this photo that I was sure we were looking at the same locks. Look closely way down in the distance and you can see buses bringing people down into the lock.

All good things eventually come to a close. We were loaded on buses and taken back to the area of the second lines, and from there there were buses either back to the parking area or to Albrook bus station.

As we left I saw this sign – Never Forget this Day, a Day in your History. Yes indeed, so true!

This was an all day event, but an excellent experience! I heard later that 45,000 people visited. A lot of credit goes to the people who organized all this, the personnel, the buses, the parking and waiting areas, the water, the bathrooms, the little flags that were handed out to everyone, music, drones, security, and I’m sure a lot more things than we realize. They did an excellent job of handling this many people and making it a great day for everyone.

Here is some more information on this construction project

Plans are for the canal to be open and operational in 2016. I definitely want to go back then, and that will be even more interesting after seeing it before the water!

We live in David, Chiriqui Provence, Republic of Panama! This blog is about some of our experiences in our new country.
View all posts by Kris Cunningham →
This entry was posted in Exploring Panama, Miscellaneous, Panama and tagged Panama Canal, panama canal construction, Panama Canal expansion project. Bookmark the permalink.

25 Responses to Visiting the New Locks of the Panama Canal