A friend gave me a couple pups, or hijos (sons in Spanish) of plantains, or plátanos. One got taken out when the guaba tree fell down last year, but the roots put up two pups that are thriving so all is not lost. The other was fine though, and it is now producing fruit. If you look at the post from January 2015, you can see it in one of the photos or go directly here. It’s the little banana looking plant in the foreground a bit to the right. Judging by this post, it has apparently taken over a year and a half from pup to fruit.

The guaba tree that fell, by the way, regrew from the stump and we were very happy to see that it lived. Then, the brush fires came through last summer and killed it 😦

One day I noticed something fat emerging from the top of the plantain plant, something that looked different than a new leaf. It was indeed a flower and from there, things moved along very quickly. The next day I saw this 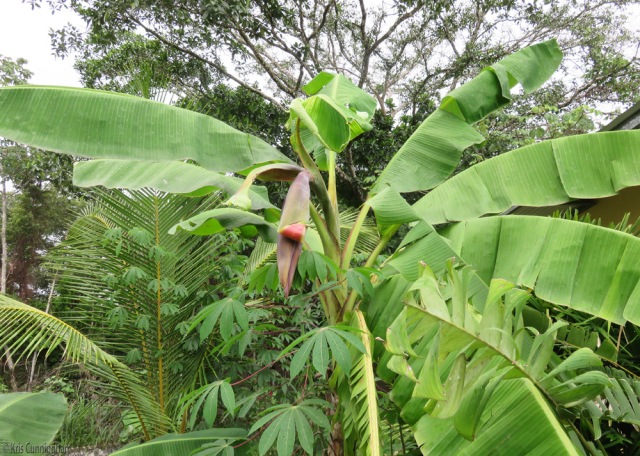 Bananas and plantains have the most exotic and unusual looking flowers! I documented the progress of a flowering and fruiting banana plant here. The plantain isn’t very tall, only a couple feet over my head unlike our huge bananas, and the flower progressed slightly differently. There were far fewer fruits but they were bigger, and the flowers at the ends were large. 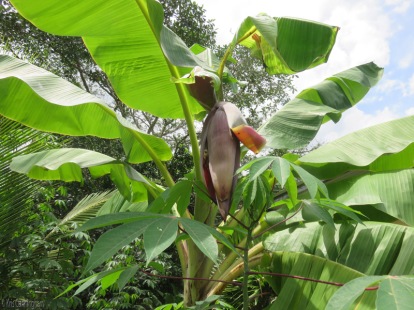 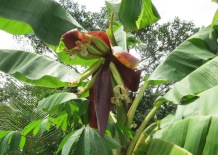 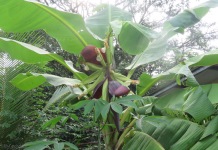 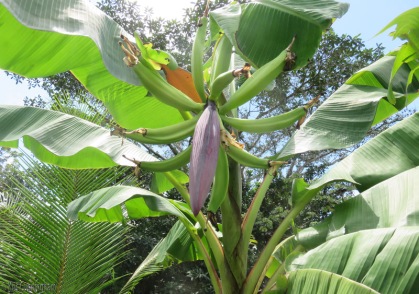 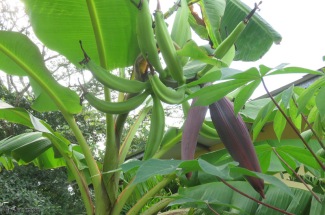 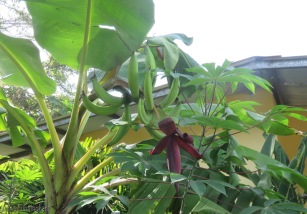 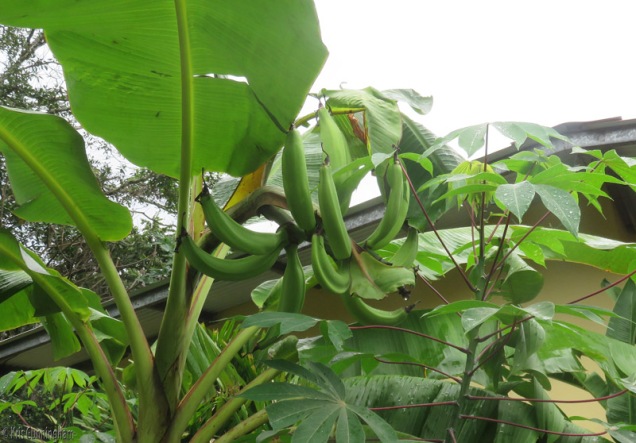 June 29th. I was advised to cut off the flower which makes the fruits get fatter.

I was told it’s about two months from flower to plantains that are ready to eat. Plantains are a staple food here so I’m sure I can ask anyone to look at them and tell me when it’s time.

Plantains are used green as a starchy vegetable. They are sliced or grated and added to soups and other dishes. Patacones are very popular and are eaten frequently. The green fruit is cut into one inch chunks and cooked either in water or in a bit of oil (different people advise different methods). Then, you take your special kitchen rock and smash the pieces flat, and fry them again in a bit of oil. The result is something that looks like a little pancake but tastes something like a french fry. (an aside, I have been told that green bananas can also be used like green plantains. I have tried this with a few things and it is true, but I found them hard to peel.)

I also like ripe plantains. When they get yellow they get sweet. They are often sliced on the diagonal and sauteed in a bit of butter. I’ve heard people say you can also add cinnamon and/or sugar, but I haven’t tried that yet since I think they are plenty good just as they are.

As far as I know the plantains are like bananas. When a plant fruits that’s it for that plant, but it will grow a pup to replace itself. There is already one growing beside my fruiting plant that’s about three feet high and getting bigger every day. Hopefully at some point there will be more pups so I can expand my plantain operation here.

Speaking of the big bananas referenced earlier, one of them fruited before I left on my US trip in March. We didn’t cut it down until earlier this month. The bananas had been looking quite fat for a while so we figured it was time. They were the best bananas ever, firm, sweet, and delicious so maybe it was good to leave them on the plant for a long time. The ones we didn’t eat fresh or give away were sliced and frozen for smoothies or a sweet, ice cream sort of snack. 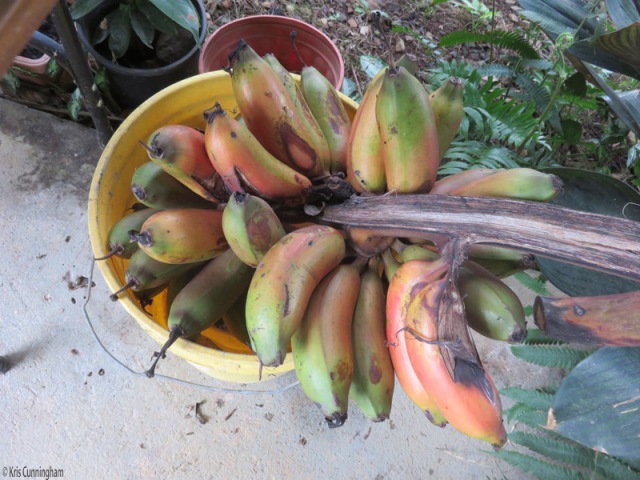 Since I was running around the front yard with my camera, I also took a few photos of the heliconias I like so much. Unfortunately these photos are probably the last that will be taken with my handy little Canon since it has taken point and shoot to a new level. The display developed some black lines, and then more black lines, and now so many black lines it is impossible to see anything at all. The photos come out fine but all I can do is point in the right direction, shoot, and hope for the best. I have an iPhone now and can use that camera for daily use, but I miss the Cannon and will have to ask around to see if anything can be done with it. 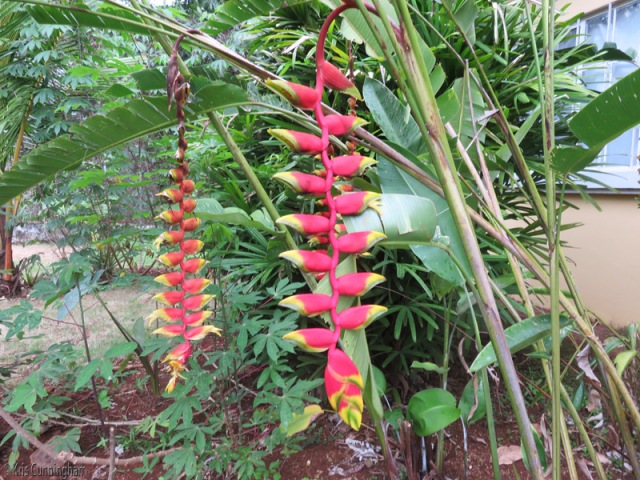