Posted on December 9, 2017 by Kris Cunningham

My daughter lives in Santa Rosa CA. I’ve written in the past about the fires that swept through there and destroyed thousands of homes and buildings. There have been many pictures in the media but they can’t have the same impact as seeing the damage in person. It goes on for blocks and blocks, miles and miles. There is one area where the fire jumped a four lane highway with frontage roads in either side. The winds were that strong. I was quite aware also that the places I saw, not everyone made it out.

Thankfully my daughter’s house and the house of her in laws are fine, but everyone in town knows so many people who lost everything. The hotels are full, and places to rent or buy are very hard to find and expensive. My daughter works for the county and is part of the group working with the displaced people.  They are arranging for FEMA trailers, looking for any other available housing options, and coordinating efforts to help with the multiple needs of so many people. It’s such a huge task though.

But, there are positive things happening too. There has been a huge outpouring of support from friends, the community, and others near and far. Police, firefighters, and others came by the thousands to fight the fires and help people. Now, a month later, there are multiple crews working 24/7 on cleanup in preparation for rebuilding. We even saw them working on Thanksgiving Day. Many of the affected people are working class families though, and the city hopes they don’t lose too many of these people who are vital to the community. Even my daughter said if they came back from evacuation to nothing, they would keep on driving and relocate elsewhere.

Here are a few pictures I took, in no particular order. 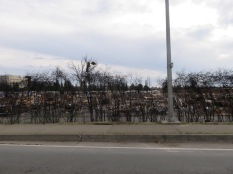 This was a mobile home park. The hospital behind on the left was evacuated. 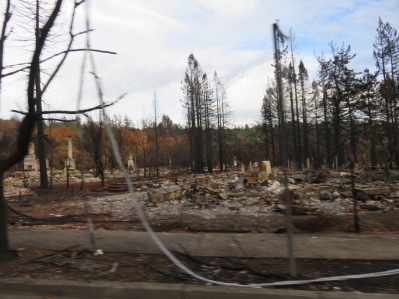 The only thing left of the homes are the fireplaces 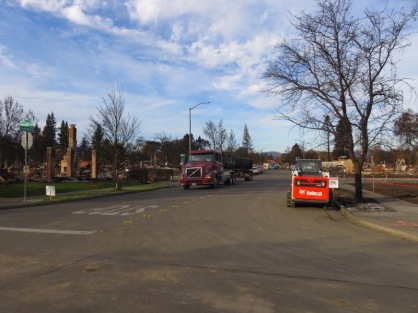 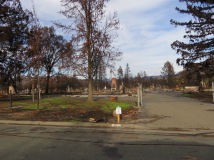 This scene goes on for miles 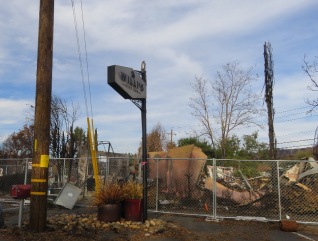 This was a restaurant 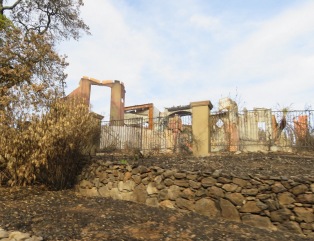 This was a really nice hotel 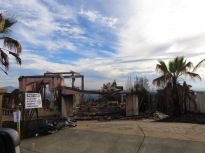 I think this was another restaurant 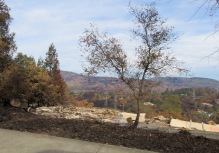 A home in a very upscale neighborhood. Notice how the hills in the background are entirely burned. 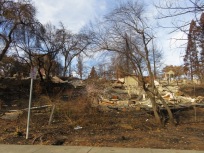 So many houses gone

This is only one of many disasters – hurricanes in Texas, Florida, Puerto Rico and other Caribbean islands, fires in other areas, and as we speak fires are raging in Southern California destroying more homes and buildings. We won’t even get into the man made disasters.

I’m so thankful to be here for so many reasons. We have brush fires in the dry summer but I’ve never seen a burned house. Maybe the fires happen enough that there isn’t much to burn, and a block house with a metal roof isn’t easy to burn. (But the CA fire burned a fire proof fire station to the ground so nothing is guaranteed, apparently). But in my experience here things burn themselves out fairly quickly. People keep their yards free of burnable material and protect the perimeter with a garden hose if necessary. If/when the firemen come they put water tanks on their backs with squirt nozzles and wet the perimeter. 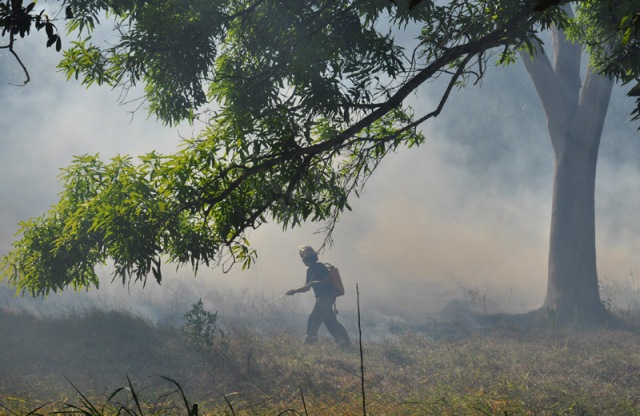 An old photo from a fire in our area, a fireman at work

I know there is always someone else who’ll has it worse, and there is so much worse suffering in the world. These people will get through this and rebuild their lives. Still though, it sucks to lose your home and everything it contains, maybe your job if your place of business burned, and then find yourself living in a FEMA trailer for months and months, maybe years.