We Bought the Whole Pig

Posted on January 2, 2018 by Kris Cunningham

To eat! We don’t need a pet pig, but we do need more pork in the freezer.

When you buy a pig here it comes cleaned, no hair or innards. You can also have the feet and head but we decided he didn’t need to bring those. You have a choice. Do you want it in two pieces or four? After that you are on your own. 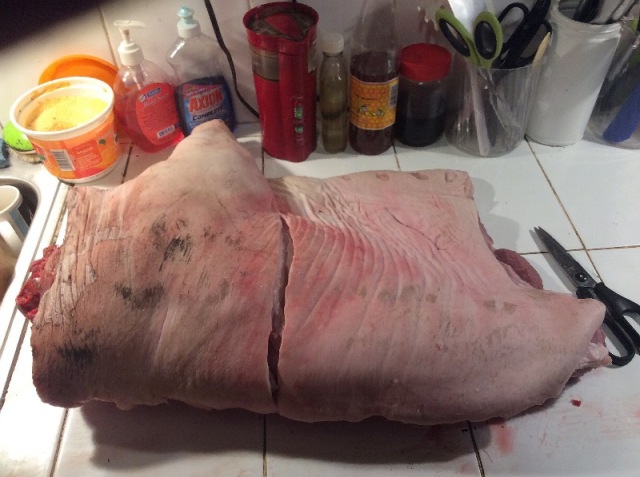 This is a front quarter. I had just cut the skin in preparation for removing it.

The first time we bought a pig and it showed up in four pieces, we had no idea what to do. We ended up freezing it, and that farmer made arrangements for us to go to a meat shop where they cut the entire frozen pig into slices.

Last year we bought a pig from Yaira’s brother (my good friend and Spanish teacher Yaira). He pointed out some of the parts and suggested how to start taking it apart. Between that and YouTube, we did it! We learned how to get tenderloin, ribs, roasts, soup bones, everything. We were very very proud of ourselves.

This year is easier since we have done it before, but it’s  still a lot of work. We have half taken apart and we will finish the other half tomorrow. I fried up some of the scraps for a late lunch and they were really good! 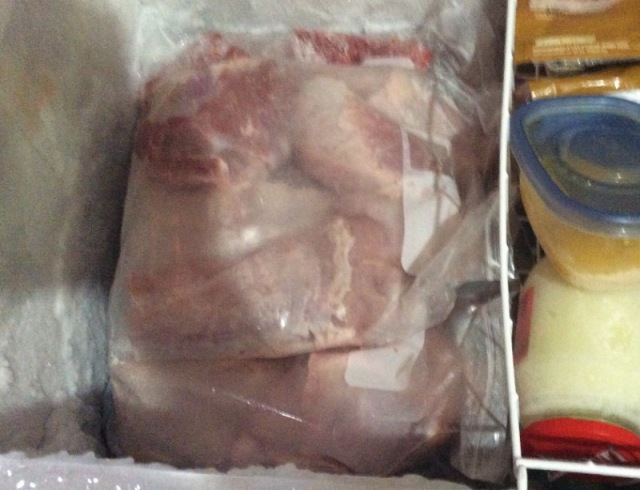 Bags of roasts are in the freezer. When they are frozen I’ll bag and label them properly. If you just toss them together in a bag before freezing though  you get a pork iceberg that is hard to separate. 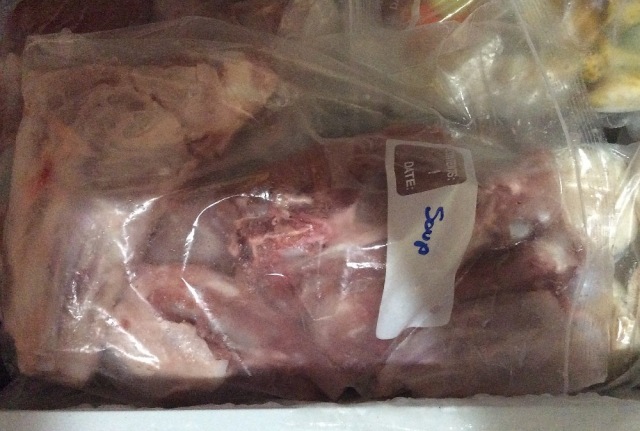 Yay, soup bones. Now that we have a dog they are appreciated not only for our soup, but her food, and she has a great bone for chewing on later.

I like buying from Yaira’s brother. He raises everything without chemicals or hormones, and his pigs have much less fat than the ones I first bought from another farmer. It’s also like buying from a family member. He sells chickens too, very good ones. He also goes around town in his truck selling fruits and vegetables from his farm but we are attached to our regular veggie guy so we haven’t tried those.

I’m trying to remember what the chickens cost. $2.50/pound? It varies a bit depending on his expenses. I know you can get them cheaper in the supermarket but free range organic chickens are worth it to me. The pig was 80 pounds, $2.00/pound. I think it’s just as much in the supermarket but I can’t say for sure since we haven’t bought pork there in years.

It is beyond me how surgeons work on people’s bodies! Pigs are built a lot like people, and seeing how hard it is to get at the knee and hip joints, and remembering how many people I cared for after their knee and hip replacements, it gives me even more respect for the ability to do that and the many other surgeries that are done every day.

I have had so many experiences here that I never would have in the USA. I have killed and cleaned chickens too. I think there is something very fundamental about realizing where your food comes from and preparing it with your own hands. I appreciate this pig, and the many chickens and fish who gave their lives to feed us.

14 Responses to We Bought the Whole Pig