Yesterday my friend Cedo wanted to go up to her finca (farm) which is about 20 minutes south of Volcan, not far from Cuesta Piedra. I was curious to see it, so off we went. It’s a nice drive through a beautiful area, and she told me a lot about people in the area and what the farms produce – mainly dairy and cacao, and some fruit.

On the road in front of the farm are three little houses. Cedo’s son lives in one of them when he’s not in Panama City (where he spends most of his time). Another is rented to a lady from Mississippi who works from home on the computer. She’s been here about 1 1/2 years, loves it, and is trying to convince her mother to extend her visit here and not return to Mississippi. The third is rented to a lady from Spain who works for her church doing outreach and talking to people.

The farm itself has cows, chickens, and pigs and is cared for by an Indian man, his wife and three sons who live on the property.

The caretaker was roping the bull to the fence. Apparently he has a bad temper so he thought it was better to keep him out of trouble while the cows left the milking area. He was making quite a racket and bellowing loudly when we arrived. 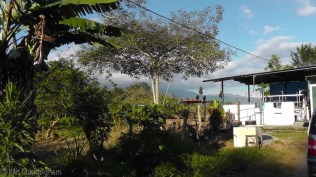 The milking area, and the beautiful view behind the farm.

Milking is done for the afternoon, so the cows are starting to make their way back to their pasture.

Every tree is covered with bromiliads and other plants.

She has one of these interesting trees that makes big balls. I forget what it’s called, but people make water containers, cups, and bowls from the balls.

The chicken area. The rooster had some loud things to say, but the two geese were by far the noisiest.

It’s surprising how much racket a couple geese can make! 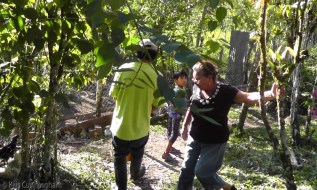 Cedo, the caretaker, and his son are discussing the chickens.

The baby chickens were small enough to get through the fence and run around. 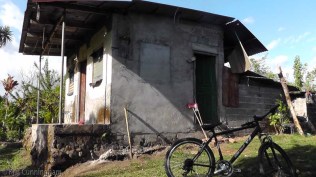 The back of the house – the kitchen and cooking area.

Some of the piglets were running around and playing with each other. 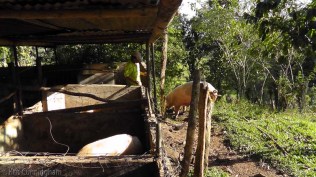 This sow didn’t want to go back in her enclosure so she was squealing and protesting loudly! He just went on with his other work and managed to coax her in later.

Another sow with her piglets.

It was a fun and interesting afternoon. I enjoyed seeing what went on at the farm, and I liked meeting the people. Cedo says she is very happy with her caretaker and his family. He has a sweet smile and a very gentle way with the animals which made me like him immediately. I only met the one little boy but he is a cute as can be, and was right there with his dad helping with the work. He told Cedo that school started this week and he likes his class, and he promised to study hard and learn a lot.

After a whole afternoon with Cedo though, all in Spanish, my brain was tired of concentrating on understanding and communicating! She helps me a lot though, and corrects me when I need it which I really appreciate. Most Panamanians are too nice and won’t say anything even when you ask. I still have a lot to learn but I’m so encouraged that I understand a lot more than I used to.

We live in David, Chiriqui Provence, Republic of Panama! This blog is about some of our experiences in our new country.
View all posts by Kris Cunningham →
This entry was posted in culture, Exploring the Area, Panama and tagged chickens, dairy cows, finca, livestock, Panamanian farm, pigs. Bookmark the permalink.

4 Responses to A Panamanian Farm