The Panama Canal is fascinating and I’d always wanted to take one of those boat trips up the canal. I found a good deal on a partial transit, so this was the basis of our plans to spend some time in Panama City. Of course I took tons of photos so it was hard to narrow it down to this (still fairly large) collection.

The trip was great and we had a wonderful guide, so we really learned a lot. I have included some links at the bottom of this post if you want to read further about some of things in the photos. And, of course for general information about the canal, Google will bring up many sources.

This big puffer fish was poking around the rocks near the boat dock.

A view of the Amador Causeway as the boat leaves. The colorful building is the Biodiversity Museum by Frank Gehry.

Ancon Hill in the distance, with the huge flag on the top.

The gray and white ship is a military ship. The green and white one is for transporting cars. There are no windows or openings to the cargo area so it can be sealed. This keeps out the salt air and prevents rust during transit. 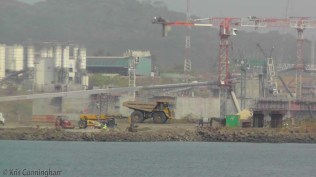 We could see some of the construction for the canal expansion project. New locks are being built here.

It looked like there was a constant flurry of activity over there.

More views of the locks under construction.

One of the many pelicans in the area. 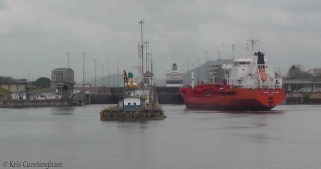 The Nordic Wolverine, an oil tanker, went ahead of us into the locks. You can also see a huge cruise ship ahead exiting the locks.

In the distance behind us, a loaded container ship pulls out. 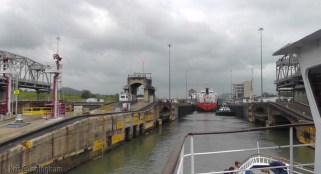 We enter the first lock!

There were many colors of paint on these bumpers lining the locks. 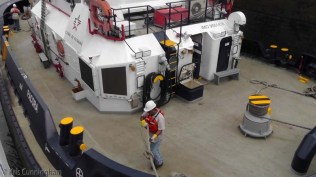 We are secured to a tug boat. 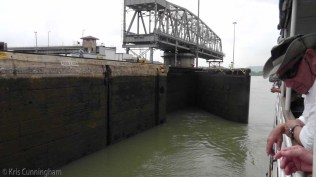 The huge doors close behind us. 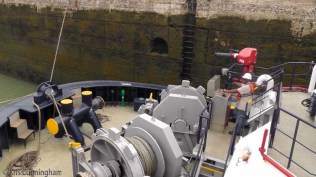 We are secured to the tug, and it is secured to the side of the lock. The man keeps a close eye on the controls, adjusting the ropes to keep the tension right and to keep our positions in the lock as the water rises, taking us up with it. 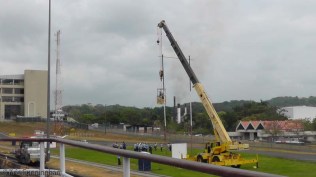 Along side, this crane was taking men up to paint the poles. 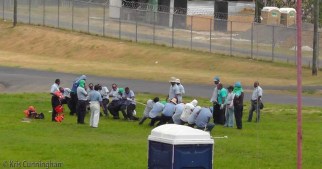 At first we couldn’t figure out why there were so many men watching the painting project, but they soon got involved in a tug of war game! (It is very common to see people who work outside with t-shirts or towels on their heads. People here are very conscious of skin health and avoid the sun as much as possible)

The lock is full and we are ready to move on. You can see the Miraflores observation building on the right. We have been up there looking down, but never down here looking up.

The huge doors are in place along the walls. It’s hard to believe that all this is 100+ years old and still working properly every day.

The second compartment is full, and the tanker ahead makes it way out of the locks. 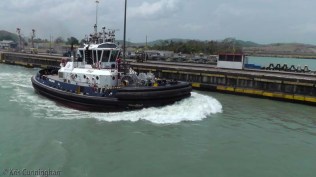 The tug moves on ahead of us. We were told that it has 6000 horsepower, and can move as quickly sideways as forward. 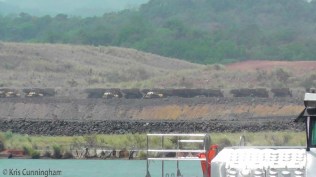 Farther up in the construction area, you can see a big row of the huge dump trucks that seem to be in constant motion moving the dirt around.

This is a door for a lock. When a door is temporarily removed for maintenance, this one is put in its place using Titan, the floating crane you will see later. 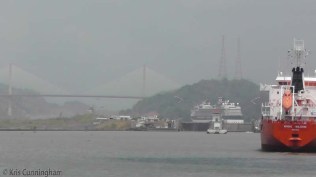 The Centennial Bridge comes into view as we make our way through the Miraflores lake.

Now we make our way into the Pedro Miguel lock.

Again, we position ourselves behind the Nordic Wolverine, which is secured to the tugs by ropes on either side.

The double doors close behind us. 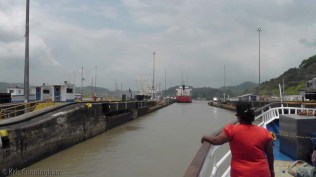 The lock is filled, and the tanker makes its way out of the locks ahead of us.

The Genius Star, a Panamanian cargo ship is in the other lock beside us.

We pass under the beautiful Centennial Bridge.

We enter the famous, or infamous Culebra Cut, the narrowest and most difficult part of the canal, and also the most challenging part of the construction.

A dredging operation in progress. The big pipe went quite a ways up the canal and was discharging mud and water on the bank. From what I have read, it is a constant job keeping the canal open because of the heavy rains and the tendency of the earth to slide down into the water.

These are markers all along the sides that help ships navigate through this difficult part of the canal. 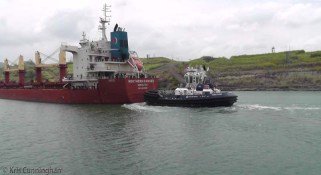 We were told that ships can only go one direction through the Culebra Cut because it is too narrow, so from midnight to noon they go north, and from noon to midnight they go south. Since it was now past noon we started seeing ships passing us in the other direction. This is the Northern Dancer, a cargo ship of Gibraltar. 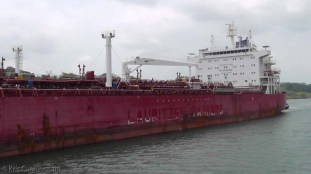 The Gunhild Kirk tanker from England looked like it needed a repaint.

The ships we passed all had a tug tied behind them. 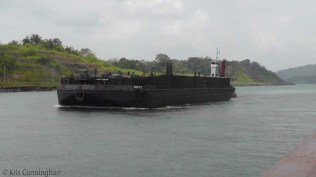 The barge was loaded with large construction equipment.

The ships make their way south and we head on north.

El Renacer Prison, where Manuel Noriega is being held.

The mouth of the Chagres River. This river provides the water that runs the canal, and is the only river that feeds water into both the Atlantic and Pacific Oceans. 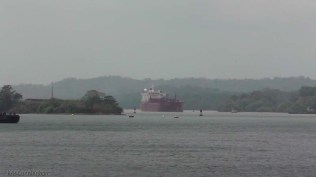 Just a pretty scene. Where else do you see a peaceful water scene in the hills, with a huge oil tanker in the middle of it! 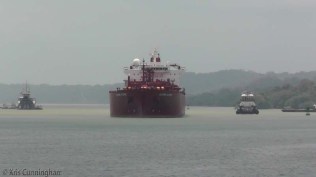 The Hafnia Crux, a Danish oil tanker, makes its way towards us.

The Titan, the huge floating crane that removes the doors of the locks when they must go for maintenance.

And, coolest thing of all! Of the 300+ pilots that guide the ships through the canal, only two are women. This woman is one of them. Every ship, without exception, must hand over control to one of the highly trained Panama Canal pilots for the transit through the canal. I was excited that we not only were guided by a woman, but I got to talk with her as we waited to get off the boat.

This was a great trip and I’m so glad we got to do it. I have heard about the Panama Canal all my life, and it’s importance to the whole world. Never in my life though did I think I would actually see the canal, let alone travel on it.

Below are some links to more information about some of the things we saw, and my favorite webcam.

The first is a WEBCAM that I used to watch in Florida while I spent hours at my desk doing paperwork. This Live Ships Map is also cool because you can look up information about the ships in the canal.

Biodiversity Museum by Frank Gehry – visit the Official Website This is the colorful building on the Amador Causeway, and the only work of Frank Gehry in Central America. We were told that if you view it from above, it looks like a toucan in flight.

Bridge of the Americas, the first bridge we passed under. The guide told us it is customary to kiss your sweetheart as you pass under it.

The Nordic Wolverine, the oil tanker that proceeded us through the locks.

The Centennial Bridge, the second bridge we passed under.

The Genius Star, the cargo ship we passed in the Pedro Miguel lock.

The Culebra Cut, the narrowest and most difficult part of the canal. It was also a huge challenge in the construction of the canal. Our guide told us that when the canal expansion is complete, there will be another passageway so ships can go in both directions. It will greatly increase the daily capacity of the canal and there will no longer be scores of ships parked in the water, often for 2-3 days, waiting their turn to go through the canal.

The Northern Dancer of Gibraltar, the tanker that looked like it needed new paint.

The Gunhild Kirk, the British oil tanker we passed in the Culebra Cut.

The El Renacer Prison – an article about the arrival of Noreiga there.

The Hafnia Crux, and Danish oil tanker that also passed us in the Culebra Cut.

The Titan is the huge crane that was built in Germany in 1941 under Hitler’s orders. The US got it as war booty and it was in Long Beach CA for many years. It was eventually sold to Panama in 1996 for $1. Shipping it here in pieces, refurbishing it, and putting it back together cost a bit more than that, but now it is used when a door to a lock is removed for maintenance.

We live in David, Chiriqui Provence, Republic of Panama! This blog is about some of our experiences in our new country.
View all posts by Kris Cunningham →
This entry was posted in Exploring Panama, Panama, travel and tagged Panama, Panama Canal, partial transit, Travel and Tourism. Bookmark the permalink.