Posted on September 16, 2014 by Kris Cunningham

This is the time Nicaragua celebrates winning its independence from Spain in the early 1800’s. Today we could hear the sound of drums coming from town. The neighbor said there would be music and dancing starting at noon, so we decided to head into town to see what was going on. 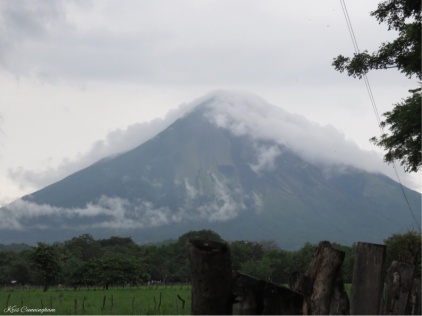 Today’s photo of the volcano 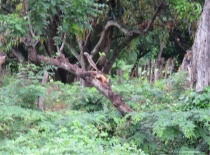 Joel spotted this interesting squirrel. It moved so fast it was almost impossible to catch with the camera but at least I got one, even if it isn’t a sharp one.

As we walked to town we saw this other beautiful scene with clouds at the base as well as the top of the volcano.

Unfortunately the drums we heard earlier were the festivities and we were told that things ended, not started at noon. No matter, there was plenty to enjoy.

The city park, complete with a pig roaming around.

The park is pretty and colorful

The park, looking down towards the Main Street of town 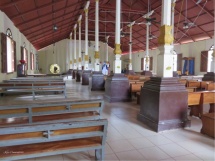 The church by the park

A pretty side street near the church and the park

You could buy this house!

Walking down the main road around the island as it goes through Moyogalpa.

We walked around town a bit, and then decided to take the beach path back to the house. It’s funny. I have to stop myself from writing “back home”.  This house has quickly felt like home even though it is temporary and we have quickly felt comfortable in this town. Anyway, as usual, the walk home provided some nice photos. 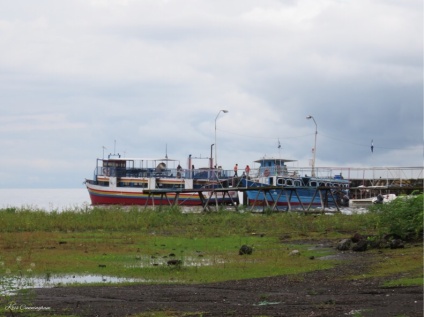 Heading home, passing the boats at the ferry dock

Cute little boy playing in a boat on the beach

A beach front house. It may not be fancy but it has a heck of a location!

Horses roaming free and playing on the beach

A couple of them decided to roll in the water 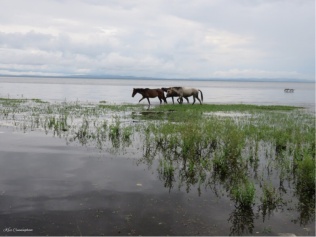 Just a pretty scene. As we passed the horses came back to the beach and then followed us along the beach path. 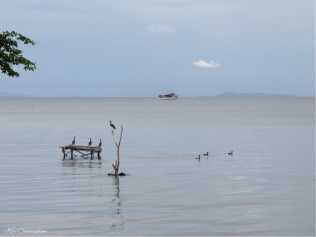 I think this spotted piglet is so cute

Today the calf is grazing in the yard. When we returned he was napping, but still let Joel give him a few pats and scratches on the head.

There are quite a few of these old but picturesque boats on the beach.

The life of a rooster is not easy. As I have been sitting on the front terrace putting this post together, he has been scratching in the dirt looking for food, poking his head through the front gate to see what is going on in here, supervising the hens who are out with him, occasionally (without success today) trying to get lucky, keeping a watchful eye on the neighborhood, and taking off at high speed to run off any other rooster who gets too close. He keeps pretty busy.

Anyway, that was Sunday. I am always a day or two, or three behind but my first priority is exploring and enjoying what this area has to offer! It is fun sharing what I enjoy here with all of you though 🙂

We live in David, Chiriqui Provence, Republic of Panama! This blog is about some of our experiences in our new country.
View all posts by Kris Cunningham →
This entry was posted in travel and tagged Nicaragua, Ometepe island. Bookmark the permalink.

6 Responses to Sunday scenes in Nicaragua