A Beautiful Monday in Nicaragua

Posted on September 24, 2014 by Kris Cunningham

Our adventure continues on Ometepe Island, and it was another interesting day.  First we headed to town to pick up a few things.

In the afternoon the volcano had a blanket of clouds hiding the upper parts.

These girls were practicing for the fiesta planned this weekend in Altagracia.

The clouds were trickling down the side of the mountain as we headed back from town. 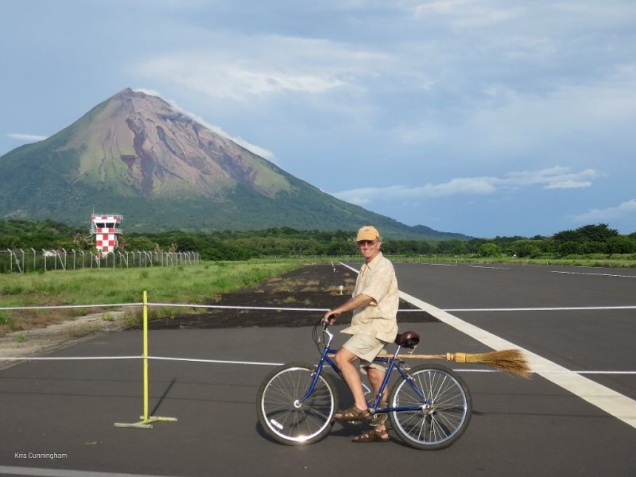 The witch mobile! We found this great broom in town and had to have one.

After we got back to the house we decided to go walking. We heard that there was some land for sale nearby so we wanted to see if we could figure out which land it was since we thought we had a general idea.

We saw some young men sitting by the road and talking so we asked them if they knew anything. It turns out one of them was in front of his grandmother’s house and she wants to sell it! It is a small typical house with an outside kitchen, but it has city water and electricity. I am guessing it is on maybe 1/2 acre of land planted with a variety of trees and food producing plants. It is close to but not within sight of the water. They want $23K, but would also be willing to sell half of the lot, the part without the house.

We discussed the property, met with the daughter, granddaughter and other family members who were there, explained why we were here and that we were just looking at this point, thanked them for their time and left.

Later we were sitting in the kitchen and heard someone calling from the front of the house. It was the grandmother, this time with her son who we hadn’t met earlier. This frail little lady had walked all the way to the house in the total darkness, down the dirt road through sand, over tree roots, and up and down with one flashlight in her hand to talk to us further and to tell me that they would give us a good deal (though no actual numbers were presented). They must be anxious to sell me the place!

Not only that, yesterday afternoon we were walking the dog and said hi to some neighbors that we have passed before. He called us over to say he heard we had been looking for land, and he has some for sale at the east end of the airport area. Word gets around!

No, we aren’t moving here. We have barely visited for three weeks. But, if there was something we really liked for not much money, we might consider it. I do love this island.

Anyway, we finished our walk just as the sun was about to set and it was a great evening to be out!

When we got back to the house we went for a walk and thought we might be in for a spectacular sunset. 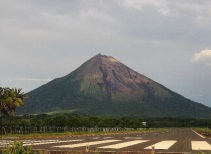 The volcano looks great in the late afternoon light 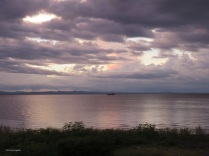 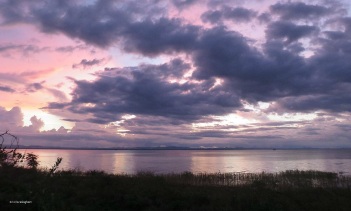 We live in David, Chiriqui Provence, Republic of Panama! This blog is about some of our experiences in our new country.
View all posts by Kris Cunningham →
This entry was posted in travel and tagged Nicaragua, Ometepe island, sunset. Bookmark the permalink.

19 Responses to A Beautiful Monday in Nicaragua