A Bike Tour to Pedasi

I just returned from my first out of town bike tour to Pedasi, where I visited good friends and a fellow blogger.

Actually, I started on the bus. The very busy Pan-American Highway is under construction between David and Santiago and it is not safe for a cyclist. I took a bus from David to La Divisa (about 20 miles east of Santiago at the road heading south). 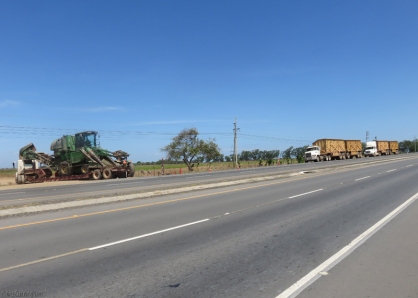 There is a great new road with wide shoulders that make perfect bike lanes. Here they were getting ready to harvest sugar cane.

The birds were very interested in the fields that had been recently harvested.

Sugar cane blowing in the wind. 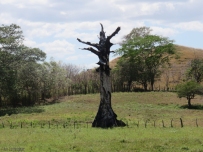 These shrines can been seen occasionally all over Panama, memorials to people who have died in traffic accidents.

With the planting of trees the environment is paid and with this, guarantees the life on the earth’s system (or something like that)

These living fences were flowering

One of the few places where I saw water. Any small streams were totally dry, and the rivers were low. 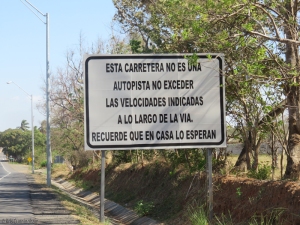 The road is not a highway. Do not exceed the indicated speeds along the way. Remember who waits for you at home. (these signs can also be seen all over Panama, and I like the last line)

One of my ancestors was a bunny.

More golden grass and rolling hills as i get close to Chitre.

My goal the first day was to bike to Chitre (about 25 miles). I got an early start but the 4 hour bus ride landed me at my starting point around noon, so I was biking in the hottest part of the day. The route started out fairly flat but I encountered more and more hills the closer I came to Chitre. By the time I arrived I was tired, sweaty, and thirsty in spite of drinking almost all of my 5 bottles of water. But, I made it and overall, it was a very good ride.

It was hot in Chitre and the hostel was downtown with a lot of street noise. It was also on the second floor so I was very thankful for a young Irish guy who carried my heavy bike upstairs. The good part was I had booked a bunk bed but I was the only one in the room, and the shower was heavenly!

Coming in to Chitre under a bright blue sky and blazing sun.

They have a Riba Smith there, an upscale new supermarket that I’ve heard about from the Panama City people.

The view of the church from the hostel balcony.

After I showered and rested a bit, I set out in search of a grocery store.

As I returned the sun was setting and the light was really pretty.

The city noises woke me about 5AM, so I actually had to wait for it to get light enough to set off for my next leg of the trip. This day my goal was to make it to Pedasi, about a 50 miles.

I left Chitre and rode into Los Santos in the early morning light.

This area may look relatively flat on a map, but in reality it is not flat at all.

Most of the cows seemed as interested in me as I was in them. 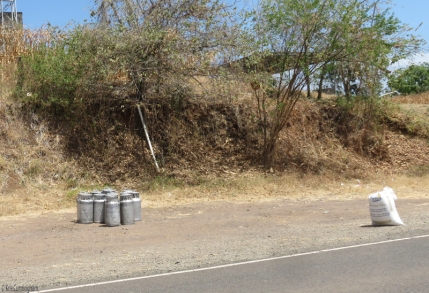 Milk cans waiting for pickup were a frequent sight.

After I left Las Tablas the road became two lane with gravel shoulders. There was less traffic though and the drivers were very considerate.

I was very happy with this ride! There were more hills than I expected, some of them challenging. And, even with my early start it didn’t take long to get hot. But, I arrived in Las Tablas (about half way) feeling better than expected so I biked through and stopped for lunch a bit south of town. I wasn’t especially hungry but I ate anyway, and drank two pitchers of water.

I set out after lunch feeling surprisingly refreshed and energetic, and I enjoyed the two lane, quieter, more scenic road. By the time I got close to Pedasi though I was feeling a bit wilted from the heat and the hills. Imagine my delighted surprise when I saw my friend waiting for me on the edge of town to welcome me and ride in together!

It was a great visit in Pedasi. I stayed with my good friends and was able to see many other friends as well. I’ll post more about that later with photos of the area beaches.

On Sunday I was ready to head home but how? It was very windy and I would have been biking over all those hills again, but this time in a strong headwind. Could I make it to Chitre for another night in the noisy downtown hostel? And, when I reached La Divasa how long would I be standing on the highway hoping for a bus with room for both me and my bike? Would I have to bike on to Santiago on the busy highway? My friends convinced me to take them up on their offer of a ride to Chitre where I could catch buses to Santiago and then David.

This turned out to be a very good decision. In Chitre I had to wait for three buses until one arrived with a roof rack for the bike. Then, in Santiago I had to wait about 1 1/2 hour for another bus with a roof rack. But, I made it back without incident (except for a dent in my bike rack).

The bus from Chitre arrives with six bikes on top! 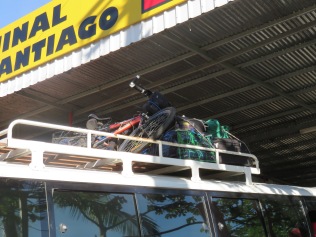 Arriving in David my bike was the only one up there with the pile of luggage.

I learned a lot from my first bike trip. First, and most important, I am up to the riding! I accomplished a 49 mile ride with hills without a problem, and I felt fine and ready to ride again the next day. Biking for a few hours alone is nice, but biking for a couple days alone wasn’t as enjoyable. I would prefer a companion on longer trips. And, a companion would also help if I need someone to watch the bike, or hold it while I rearrange something. (My loaded bike is too heavy for the kick stand.)

What now? I’m ready to plan a longer trip, maybe to Costa Rica or Nicaragua but I’d rather go with an experience bicycle tourist. I don’t find bus travel as enjoyable, especially with a bike so I’d rather head west. Meanwhile I’ll continue biking around here, and working on more strength for the hills. I must make it to Boquete one of these days!

We live in David, Chiriqui Provence, Republic of Panama! This blog is about some of our experiences in our new country.
View all posts by Kris Cunningham →
This entry was posted in Exploring Panama, Panama, travel and tagged bicycle touring, Chitre, Las Tablas, Panama, Pedasi, Travel and Tourism. Bookmark the permalink.

26 Responses to A Bike Tour to Pedasi