A Visit to the Farm, after Navigating Around the Protests

Yesterday I made a visit to the finca (farm). My friend Cedo is in the USA visiting family, and it was payday for the caretaker. After meeting the mechanic about my misbehaving car (a disappeared alternator belt) a couple friends and I set out for Cuesta de Piedra.

We drove down the highway past Boquerón, towards the bridge before Concepcion, and found traffic at a standstill and the road blocked by protests. The Barro Blanco Dam has been under construction for some time and is almost completed. The indigenous people have not been happy about the project and continue to oppose it, saying it will damage their land and displace their people. (There is a news article HERE).

I am happy this is a country where people can express themselves. I wasn’t so happy yesterday to have my day complicated, but I wasn’t nearly as troubled as a lot of people trying to do their work and get goods where they needed to go.

I was expecting the mechanic to contact me around lunch time, so I didn’t have time to backtrack and take another route. I returned to David. It turns out the car also needed a new alternator and wouldn’t be ready for another day, so Joel and I set out after lunch to take the route through Potrerillos and across to Cuesta del Piedra. It is a beautiful drive though some parts have steep uphills and downhills on very curvy roads, and I was thankful Joel was doing the driving. But, at least, we did have another route to get where we needed to be. There are many areas where the PanAmerican Highway is the only way to get through, like in San Felix where there were more protests.

We made it to the farm with no problems. I am taking a drawing and painting class so I needed to be back by 4PM and this didn’t leave any time for lingering, but I did meet with the caretaker and took a quick tour with my camera. A picture is worth a thousand words and I know Cedo misses her farm and her animals, so here are some pictures.

I found the cows in the milking area.

The cows were hanging out listening to the radio.

I just snapped some random pictures of the girls. A couple of them look suspiciously round in the belly.

Yes, I am pointing my camera at you.

There was a youngster hanging out with the big girls. 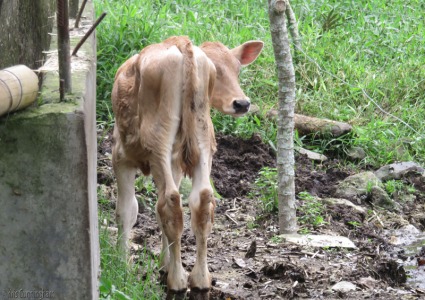 The calves were in the field below so I tried to catch some of them with my camera.

Word is there are 10 calves, 2 males and 8 females. The herd is growing.

The breed tends to look slim but this one looks pretty bony to me.

The geese registered their protest with loud honking.

I also visited the pigs. The caretaker said there had been problems and lost piglets from diarrhea. When I got home I called Cedo’s son who said he had talked with the caretaker and medicine was on its way. 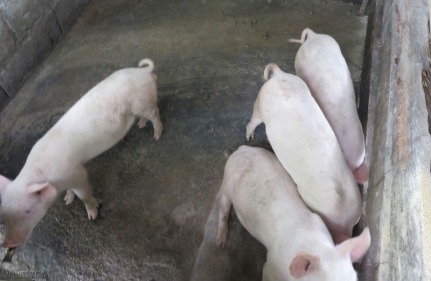 I made the rounds of the pig department. 4 piglets here.

One more piglet next door. They have grown since I saw them last.

There were tiny new piglets in the back! 9 of them were running around.

This gal was happy to have her ears scratched.

and 5 more here, for a total of 24 bigger piglets.

That’s a lot of piglets! There were more adults in the enclosure behind the pig house too.

It was a hectic day between the car and complications getting to the farm, but it was also a beautiful day. Everything is very lush and green and the drive was gorgeous!

We live in David, Chiriqui Provence, Republic of Panama! This blog is about some of our experiences in our new country.
View all posts by Kris Cunningham →
This entry was posted in Exploring the Area, Miscellaneous, Panama and tagged Barro Blanco Dam, Chiriqui, dairy cows, farm cows, fin a, Indian protests, pigs, protests. Bookmark the permalink.

8 Responses to A Visit to the Farm, after Navigating Around the Protests