Hiking to the Waterfalls

My friend Andrea invited me to go on a hike to some waterfalls in the Los Angeles area. I had seen pictures from her previous hike there and it looked amazing. So, I agreed to get up in the middle of the night (5AM fits that definition for me), carpool with my friends John and Susan, and go hiking.

I woke up and it was dry. I headed up to our meeting point on the Caldera intersection, ran into quite a bit of fog, and then rain. It rained to Gualaca where the group was to gather, dried a bit, and then rained again all the way to the beginning of the hike. When we arrived the rain was just starting to let up.

We set off down the very muddy path past the cows, greeting a couple men on horses as we go

The view looking back over our shoulders is beautiful i

I am not a good hiker. I am inexperienced, slow, and you do not want to hike with me. If you don’t believe me, ask anyone on that hike! I had my good sandals. It sounded like a great idea, comfortable, secure, and good for wearing in water (I know rivers here are rocky). But, I had never worn them in mud before. As soon as the mud got in them I was sliding around in my shoes and it was very hard to walk. I pushed on though, tightening them as much as possible and carefully picking my way along. By the time I got to an uneven field though it was clear that I could not walk at all. By now half of the attachments on the right sandal had broken and the sole was pulling away from the shoe.

I decided that I had to go back to the car where thankfully, I had stashed my hiking boots. My friend John said he could make much better time than I could in my inappropriate footwear. So, the hike stopped, everyone hung out in a field for what seemed like forever while he went back to the car. Apparently I had come farther than I thought. If I had had any sense I would have changed my mind about the footwear shortly after the muddy road but I didn’t want to be a problem. This turned out to be a much bigger problem in the long run for everyone waiting and for John who had to hike a lot more than he planned.

As we wait in the field, the fog rolls in

Soon it is so foggy it is hard to see anything 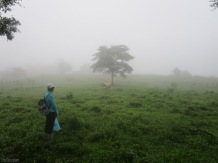 Eventually the fog clears a bit, and a cow comes walking and mooing towards us.

I decided to backtrack a bit to see if I can connect with John a bit sooner, and pass this sow and a piglet

Then, the rest of the piglets approach

When the cows approached in the field I wasn’t totally comfortable. They looked like they were all female and calm but still, they are quite large and could be a threat if they wanted to be. I headed back on the path hoping to catch up with John a bit sooner. Eventually he returned with the shoes and it was amazing! I could walk again! What a difference good footwear makes. We head back to the field where everyone was waiting so we could finally be on our way.

The view behind continues to be amazing

Now the fun really began. The grass was high enough that it was hard to see rocks and holes under foot, and soon it was a fairly steep downhill. That was nothing compared to what lay ahead though. We had to make our way down a very steep, muddy, slippery embankment that led down to the river. There wasn’t always something to hang on to and though it wasn’t dignified, I did a fair amount of it sliding on my butt. I figured getting there in one piece was the main objective. 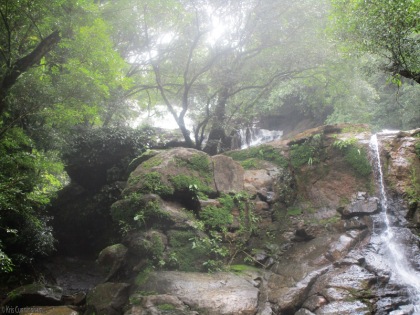 We made it! You can also see the upper waterfall at the top of the photo

The photos do not do this justice

There were multiple waterfalls at this spot

A hiker makes her way up the slippery rocks

My friends John and Susan also wave from above

As we left, I snapped another picture downstream where you can see the river below

I didn’t go to the upper level. The rocks were wet and very slippery and I am not good at that sort of thing. It was so beautiful where I was I didn’t feel like I was missing anything, and it just wasn’t worth the risk. Besides, my friend Andrea had photos from her earlier trip which I will share below, so none of us have to miss anything.

After a while everyone came back and we made our way up the muddy, slippery embankment which I found very difficult. Thankfully our guide gave me a strong hand up on the more difficult places, and I did the steeper parts on my knees, not my feet, so I eventually made it up. Again, not dignified, but I made it.

Then, the next objective was to go to another spot on the river and see a couple more waterfalls. 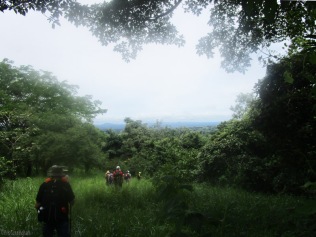 We head farther down through more long grass 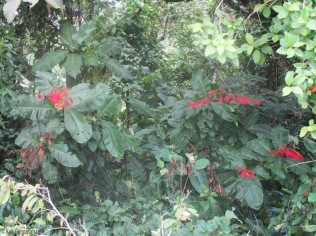 a pretty shrub in the woods

We got to the next site and I immediately knew it wasn’t for me. The embankment down was much steeper than the first one. Another hiker who was recovering from a past ankle injury and I both decided to sit this one out, so we went back up a ways to a shady spot with a fallen log to sit on. We chatted, ate our snacks, she cleaned and treated my scratches (thank you Jackie), and we enjoyed the interesting bugs, spiders, and butterflies that came by.

This was a very wise choice. The others said the climb down and back was indeed more difficult. The rocks below were also very slippery, the current was strong, and if one lost their footing crossing the river one could easily be swept down river where a 30 meter drop to the rocks below awaited. If someone got hurt down there I don’t know how anyone would ever get them out.

A couple other hikers decided not to cross the river, so they made their way back up after telling the guide that they would pick us up and we would all go back to the cars.

We make our way back up to the beautiful views above 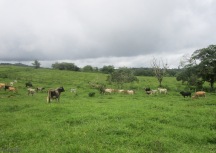 We go through the cow pasture where there are more cows now, and calves, and a bull but thankfully all are peaceful and don’t bother us

Then, back down the muddy path to the cars

We have done some hiking down by the river below us, and I went on the Pipeline Trail hike in Boquete which was a smooth path all the way. I was told by others that yesterday I went from beginner level to the big leagues in one jump. That’s for sure! I’m so glad I didn’t try to get down to the river at the second site. As it was I was tired, really sweaty, and covered with mud. Today many parts of my body are sore. My knees, my biggest weakness, are really unhappy with me.

Something to keep in mind for outdoor activities in Panama is the season. I think this hike would have been easier in the dry season. The people who had done this last May said the grass wasn’t so high, there was less water in the river so more rocks were exposed and more importantly, they were dry and not slippery. The way up and down embankments would have been much better also when they weren’t muddy and slippery.

Last, but hardly least, here are the pictures from that hike in May that my friend Andrea said I was welcome to share (thank you Andrea!) They include a little poison dart frog. We saw one on our way up the embankment but my photos weren’t in focus, so I’m glad you can see one here.

20 Responses to Hiking to the Waterfalls