Last Friday on a really windy day, part of a huge tree fell into our yard. It just happened that our landlord was on vacation in Chiriqui (he and his family live in Panama City). We had only met briefly some time ago so I didn’t recognize him when he showed up on Saturday morning to see the damage and plan for cleanup.

After a few messages to confirm plans and time, he arrived on Monday morning with his brother, and a workman with chainsaw and machete in hand. This began a very fun day. Teo, our landlord sent me many photos and most of these are his (thank you Teo!). I was glad because I missed part of the day. I went off for a planned meeting with folks from International Living who showed up 40 minutes late (no apologies), and proceeded to ask me all the same questions I’d been asked in previous interviews *sigh*.

Anyway, you would be amazed at what a strong and capable Panamanian man can do in a short time! 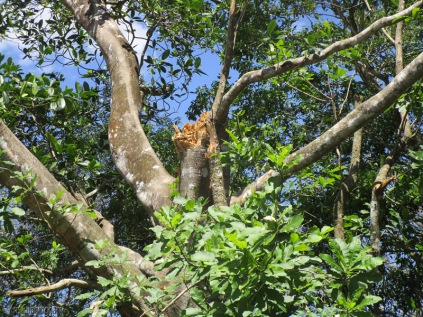 You can see where the tree broke.

Here is the large part that fell down

The large part again. Word was when the worker cut enough of the part that was in the yard, the main, biggest part just fell down the cliff. 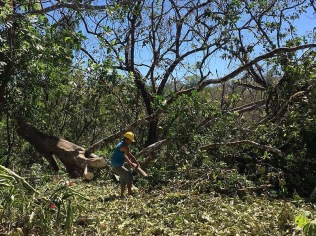 He picked up the pieces and heaved them over the cliff like it was no big deal.

We tend to be lazy in our retirement and not get up early, and Joel was just starting breakfast when the work begun. He wasn’t about to let some hard working guys smell bacon and not share, so there was a breakfast break mid morning. 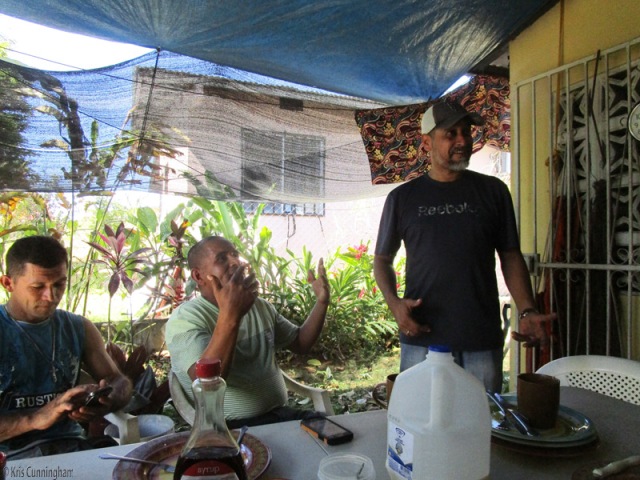 Teo, our landlord, standing and his brother Alvin talking, while the workman looks at his phone

When I got back home from my meeting, I was amazed at how much had been done! There were only leaves and twigs left.

The tree took out the fence, a couple posts, and part of the supporting wall.

Farther down the fence the supporting wall was also broken

We were very thankful that our landlord was in the area. He and his brother arranged all the cleanup and consulted with Lucho our friend and neighbor. Later Lucho will rebuild the wall and fence. The tree is on land owned by the government, and it still has some very large limbs that could come down. The concern is that the tree is diseased and weakened which is why it broke, and the other limbs should also be cut before they fall. No one wants to repair the fence until this is done and as owners of the land, it is the government’s responsibility to cut the tree, and also pay for the damage on this property.

This is one big reason why it’s nice to rent. It would have been quite a task for us to figure all this out and make all the necessary arrangements!

Anyway, you can’t expect hard working guys to get things done with no fuel. When I came back Joel had put together some lunch for everyone. 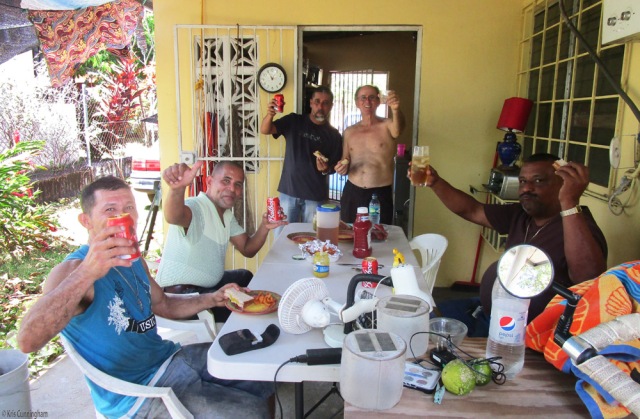 From the left, the workman, Alvin, Teo, Joel, and Lucho

I had SO much fun! We all talked and laughed at meal times, and I spent most of the rest of the time talking with Alvin and some with Teo. Teo also speaks English so he and Joel were able to communicate easily. Alvin lives just up the road in Dolega so who knows. We might see more of each other in the future.

The last of the cleanup, leaves and twigs

Heave Ho, over the cliff!

the yard looks cleaner than it ever had before

What a great silver lining in the cloud of the tree incident. Up to now communication was always through our realtor which is fine, but I’m happy to have these great new friends. Hopefully in the future Teo and his family won’t hesitate to visit when they are in the area. They never wanted to bother us, but it certainly wouldn’t be a bother for us to see them again.

Tomorrow we are heading to Panama City and then to Cuba on Friday. We are supposed to have internet but who knows. Or more likely, we will be too busy seeing the sights and experiencing the country to spend time on line. I will return eventually though! Meanwhile you all continue with the sentiments of yesterday and send loving greetings. We never need to wait for a holiday on the calendar to do that.