New Bus Terminal, and a Few Other Things

The day started with a motmot eating his breakfast as we ate ours. I couldn’t see exactly what he had, but I think it was a butterfly. 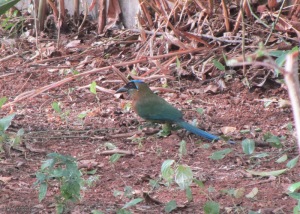 After breakfast I set out for a ride. As I left the neighborhood, I came across the neighborhood cows loose in the street. They are quite shy so I got off my bike and stood by the side of the road as they walked by. We found out in the past that they will stampede away in fear if they see a cyclist riding towards them!. They didn’t seem happy to see me today but at least they managed to stay calm.

I decided to check the site where they are building the new bus terminal and the Federal Mall. They were moving dirt around for the longest time and it didn’t look like much was happening, but now things are definitely happening, and happening fast!

The site of the mall is on the right where they have poured a lot of concrete, and the bus terminal is farther back on the left

I went to a different vantage point where you can see the terminal, but not the mall site

Of course with anything new, there are different opinions. Right now all buses go to the terminal downtown so it won’t be as convenient for many when that changes. But, downtown is crowded and congested and there is minimal parking. The new site will have a lot of space, parking, and easy access to main roads.  Below is a promotional video showing what the terminal will be like when it is finished.

I couldn’t find much to share about the mall, but word is that it is being built by the same people who built Albrook Mall in Panama City, and it may be as big.

I also checked on the huge palm tree that has been doing interesting things.

This is from last October

Then, in late November it had flowers

In January the flowers were looking pretty faded 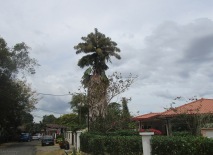 Now in March, the top seems to be full of little berries or seeds

You can see the seeds better here

I don’t know what is going to happen to the tree eventually. Since all this flowering and seeding is going on at the top where new leaves usually emerge, it could be the final stage of its life.

A couple days ago we saw a plane flying overhead. I know to most people this isn’t remarkable but here, we almost never see that. We can hear some of the flights as they land and take off at the airport, but we usually don’t see them. We don’t see contrails in the sky either. That was strange at first. I don’t think I’ve ever lived anywhere without contrails. 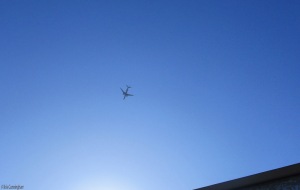 Last, but not least, I was sweeping and accidentally tossed this bug on its back. I rescued it on a leaf where it was kind enough to stay for a while so I could take some photos.

12 Responses to New Bus Terminal, and a Few Other Things