There is nothing like doing without to make you appreciate something.

People in Panama don’t always have water. The government is addressing the problem and has allocated money to build and upgrade systems. But right now, it is summer when it doesn’t rain. There is building going on everywhere in the David area, but I don’t think they have thought about the increasing demands on the infrastructure.

No water has been a common problem even before I moved here, especially in the dry summer. My first day in the house, I went to refill my water bottle and nothing came out of the tap. The neighbors were totally unconcerned. I quickly learned to have water supplies on hand. 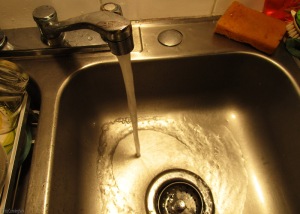 It hasn’t been too bad, really. I think only once, maybe twice in our 5+ years here has the water been off for more than 24 hours, and then they sent water trucks around to refill any container you gave them. Yesterday it slowed to a trickle and then went off. It was on last night but really late, past midnight and I didn’t feel like washing dishes, hoping there would be water in the morning. There wasn’t.

We have plenty of water on hand for these times but it’s inconvient to wash dishes and bathe with gallon jugs. It can be done though, and it makes me think of all the people in the world who never have running water, who have to carry it in from somewhere, and who may not have access to any clean water at all.

Tonight we were out playing music and didn’t get home until almost midnight and there was water! Yay! Not much, but enough to shower. It must have just come on and was refilling the lines and neighborhood water tanks because the pressure has improved since then.  I showered, washed my hair, cleaned the bathroom and kitchen, refilled all containers, and now there is a load of laundry in progress.  Yes, I know it’s 1:15 AM, but I’m not going to count on having water tomorrow.

If anything goes out, I would rather it be water. We rarely have trouble with electricity and internet for which I’m thankful. And, I’m glad to be in David. I hear talk from Boquete people about water being out for days, electricity also going out, and a lot of frustration.

Panama is a lesson in not taking things for granted. Thank you for the water. Thank you for the clean water right in the house… most of the time. And if we have no water, there are three big supermarkets just minutes away and a river behind the house.