Fun in the Neighborhood

Tuesday morning, last week, we woke up to this –

That is our front gate

They are putting in sewer lines. Word is, this is part of a 2-3 year project to put sewer in the entire city,  build a treatment plant, and then hook up all the houses. I was also told that many of the power lines will also be put underground to make the city look nicer.

It’s been an interesting and fun week talking with the guys, watching them work, and watching their progress. I feel like we have been treated very well. People have been around twice to talk with residents and hand out information. Another guy came around after work started to answer any questions and give us the phone number to call for any problems or questions. There is a sign put out every night with all the pertinent and emergency phone numbers. At the end of the day the street is leveled out and smoothed so everyone can get in and out with their cars.

So, day 1, they did the section in front of our house.

There is a big trench in our street

After the pipe is placed, they start refilling the trench

The street was left like this, flat and smooth

They were very particular about the work. The bottom of the trench was perfectly flat and smooth, strings were run, things that looked like survey equipment were brought out, and only then did they put the pipe in the hole. They covered the dirt with plastic until they were ready to put it back in, and when they were done the dirt was put back and the road carefully smoothed over. They guy with the big backhoe machine is a real artist! It’s like the machine is an extension of his hands and it’s very cool to watch.

Day 2, Wednesday. They started on the next section of road, and dug side trenches to connect house hookups to the pipe laid yesterday.

The workers called me over to explain the hookup for our house and show me the pipe that was being connected. They left it with the capped off pipe at ground level, easy to find and available for later. I also found out that the cement disk is the bottom of a manhole that will be in front of our house. 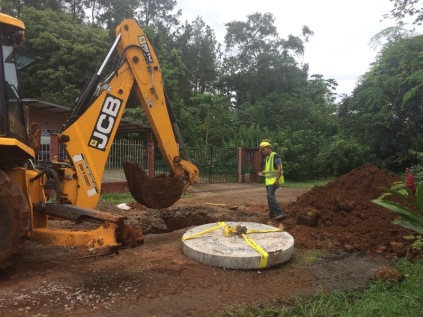 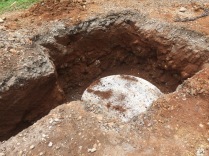 It’s in there, after much fussing to get it exactly right

Then they made this little wall

They again left the street flat and smooth except for the man hole. That had an orange fence around it, a sign and warning cone, and another sign farther up the street.

Work continued in a similar fashion for the rest of the week, digging for the next section of pipe, and for the connections to the houses. The man hole, however turned out to be quite a thing!

Day 3, Thursday, work continues on the base of the man hole. 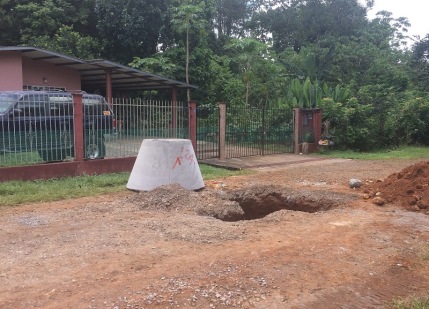 The main part is brought down the street to the site

More cement is put in the base

More trench is dug, the pipe removed, then replaced, then removed and replaced again

Meanwhile, up the road that work continues

Day 4, Friday, work continues on the manhole. But, now there is banging in the hole all morning as they chip away at the cement. By now I’ve had a couple really nice conversations with the head engineer so we know each other. He said they had the wrong size main part. It was meant for the man hole at the end of the street. This one is smaller so they are having to make the base smaller. To further complicate things, this crew hasn’t done this before so they are learning as they go.

Day 5, Saturday. Yes, a 6 day work week is quite normal here. And, this is heavy work in the hot sun or whatever Mother Nature wants to give them.

The saga of the man hole continues, and does the chipping away.

The main part is lowered into the hole, then taken out again 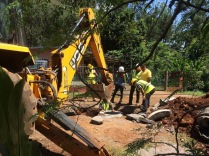 Back into the hole

Back in the hole… again

Those poor guys! I don’t know how many times they lifted that thing in and out of the hole. Hopefully it doesn’t go like this again because there are a lot more man hole locations marked on the streets in just our neighborhood alone.

This is probably enough of the story for the moment, and it was the end of the week for them. They again left the orange fence around the man hole and put up the signs and warnings, so it must not be ready to cover yet.

5 Responses to Fun in the Neighborhood