I have some photos here that I’ve taken around our home. I’m more accustomed now to the large variety of insects that we usually see so I don’t take as many photos as I used to, but there are still some remarkable new visitors who stop by now and then. This very large stick bug was behind the washing machine. It fell back down when it tried to climb the wall so I took pity on it and put it out on a ginger flower.

The morning we were headed to the airport I saw this really big, colorful caterpillar. My search turned up its name, tetrio sphinx. I’ve seen these moths but I didn’t realize this was their caterpillar, or that it was so big because the moth is not unusually big. 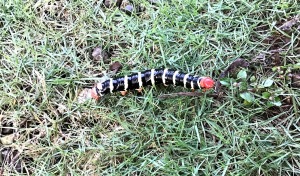 There are tons of birds too. I spend a lot of time on the terrace and many visit the birdbath. I took most of these photos from the other side of my bookshelf so they aren’t great but I didn’t disturb or frighten the birds from my spot.

One of the many tanagers who visit

Female tanagers gather in the water

A blue gray tanager and a yellow bird 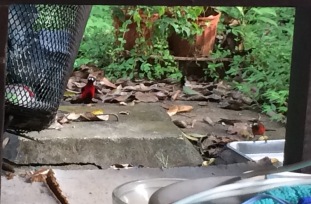 A male tanager stops by

I don’t have my bird book to identify these birds accurately but they are all frequent visitors to the birdbath. It’s a pleasure to be outside, especially in the late afternoon when many seem to visit. Panama is said to have more species of both bugs and birds than the entire North America so it’s a pretty cool place to be.

2 Responses to Bugs and Birds