Posted on February 2, 2019 by Kris Cunningham

This is the second of a series of posts I wrote on our recent trip to Havana, Cuba. Now that I’m home with continuous, efficient internet I’ll post them as I get time.

Friday, our first full day in Havana, a day of learning a lot (and having a lot to write about). First we learned that the noisy rooster lives in the 3rd floor apartment across the street. Diana told us someone from the countryside brought it to her to help her with some stomach problems (huh?) but the rest of the neighborhood thinks it’s crazy and doesn’t like the noise, which struck me as odd. This neighborhood is so noisy what’s one rooster? She treats the bird as a pet, and one day we saw her having a serious conversation with him. 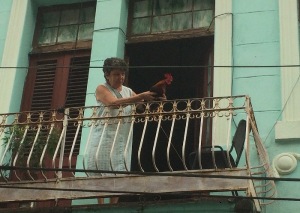 Anyway, Diana brought us a breakfast of eggs, rolls, pineapple, hot dogs, French fries (sweet potato), guaba juice, coffee, and milk. Then, Lucho, Joel and I set off in search of some basic supplies for meals in the coming days. We were told of a few supermarkets we could walk to. We passed a nearby neighborhood market with some produce and pork for sale and figured we could stop by on the way home if need be.

We found one of the supermarkets but there was very little for sale. We did take note that they had water though. Another supermarket looked well stocked until you look closely. There was lots of soda, beer, canned tomatoes, oil, cleaning supplies but no rice, matches, salt, or other items on our list. The meat department had boxes of frozen chicken that people were carrying off, and yogurt behind the counter but we couldn’t make sense of what was going on there so we left. We bought canned tomatoes, salchichas (canned hot dog type product), lentils, oil, pasta… I think that was about it) 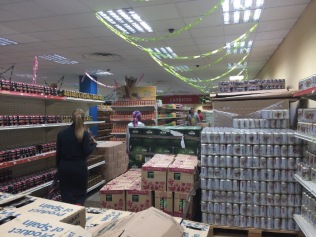 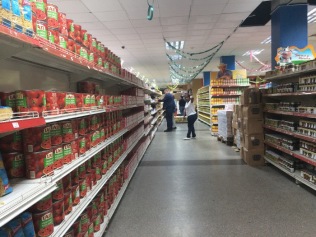 Lots of canned tomatoes! Beyond you can see some oil, canned sardines, and on the right, olives and a few other pickled vegetables.

We went back to the first supermarket but they no longer had water. You could buy rice though, and flour, beans, sugar, and oatmeal. The guy behind us wanted oatmeal, 10 pounds but you are only allowed 5 so we agreed to buy another 5 for him. They ran out before we got to the head of the line though so he left. We bought a tote bag and a plastic bag from one of the women at the front of the store, and when it was our turn we presented the plastic bag so the worker could fill it with our 5 pounds of rice for 20 Cuban pesos, about $.80. The fairly large store also had cleaning supplies, hamburgers (odd looking very orange patties), and rum for sale and a lot of empty space. 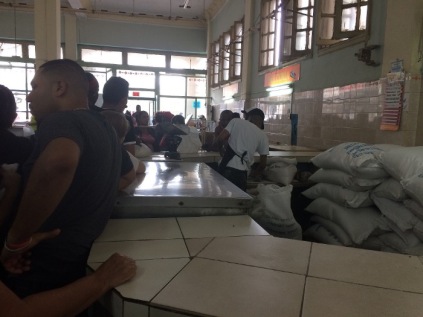 Lining up for rice 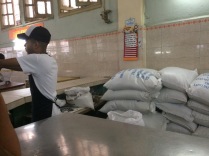 we had to wait in line about a half hour 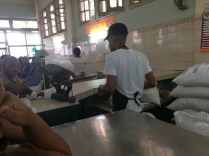 getting close, almost our time to put the white plastic bag on the scales

By now we had run around and asked around quite a bit (mostly in the rain) so we headed home. On the way we bought bread from a bread shop, and some pork, onions, peppers, and tomatoes (even though the produce didn’t look good, it was the best we had seen) from the little market we passed on our way out. Lucho went out later a returned with 2 gallons of water, I’m not sure from where. 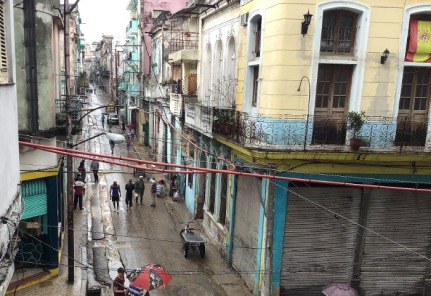 the street is active even in the rain 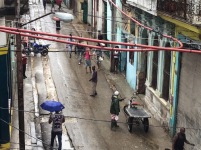 There didn’t seem to be an onion shortage 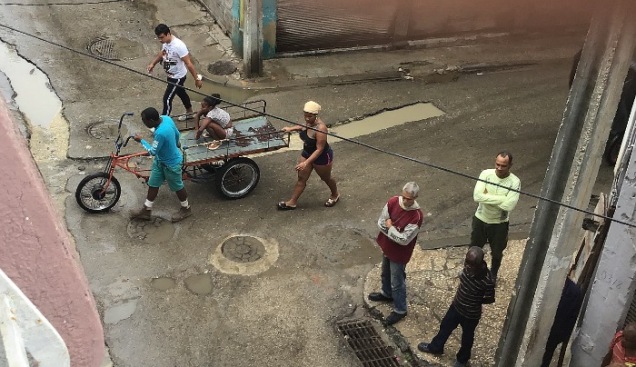 Cart your kid around town 😀

As we were relaxing/recovering at home we heard the noise of a truck and pounding. It turned out they were unloading large boxes of frozen chicken, one guy tossing them to the back of the truck (the pounding) where the other could grab them and carry them into the store. There was a group of people gathering, and we were told if we want to buy chicken we need to talk with Diana. (More on this later). 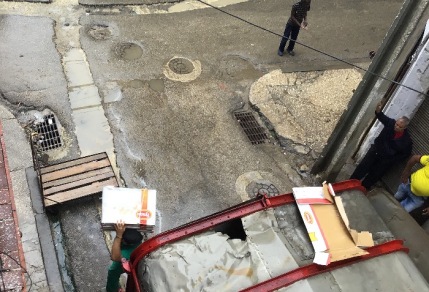 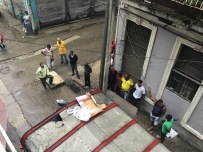 The cart is loaded

The cart is pushed away, we were told to stock another business

Now the van is loaded

The van drives away

After resting a bit we decided to go find the Malecon, the street along the waterfront. It was still cold and windy, but thankfully not raining any more. It was very cold and windy by the Malecon with waves pounding up over the sea wall so we didn’t stay long but it was an interesting walk along the way. 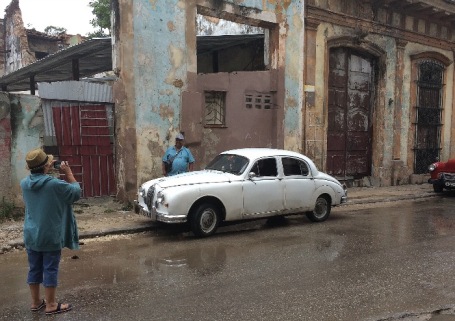 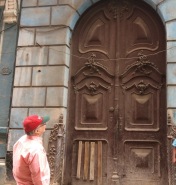 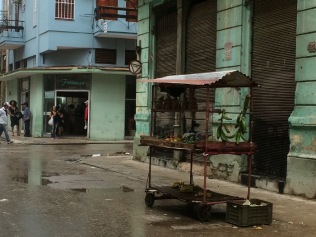 Some produce for sale 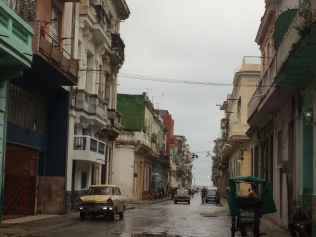 A street scene as we approach the Malecon

The guys check out another car 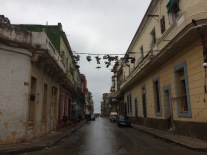 We never did learn what is up with the shoes hanging from wires. This is the biggest collection we saw 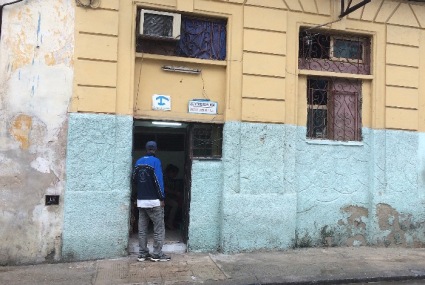 House for sale, a new development. When we were here 2 years ago people weren’t allowed to sell houses

waves crash against the sea wall

Water splashed over the sea wall. We didn’t stay long.

On the way back we passed an elementary school. Haydeé, being a teacher, was interested in visiting and spent quite a bit of time talking with the assistant administrator. 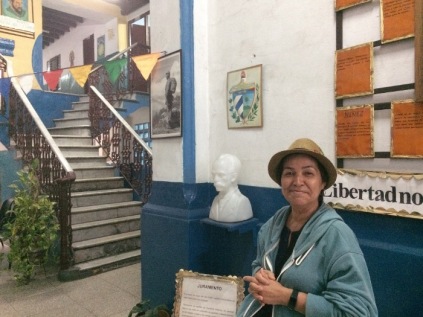 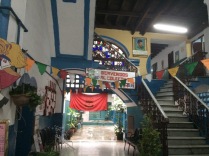 The school was bright and attractive 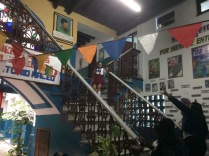 The kids were so cute! 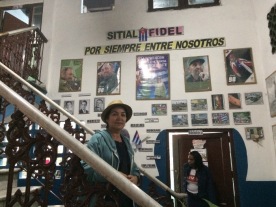 The country respects their history and their leaders 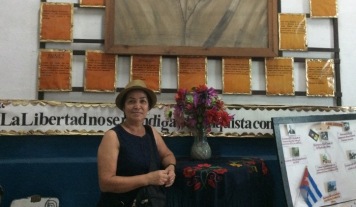 Haydee again, in the entrance

We returned home about 5:30 and there were still people waiting for chicken (the truck had unloaded about 12:30-1:00pm). Earlier we had seen quantities of boxes of chicken loaded on carts and in a van to be taken away. We were told the chicken was being distributed to other stores, but they never did give any to individuals that day. Everyone has a ration book of food they get from the government, and this includes a pound of chicken per person per month. This chicken was government chicken for the people with books, which was why we weren’t able to buy any. Our assistant could get some but we didn’t want to take her chicken allotment especially since we had pork, considered too expensive by most of the local people.

But, other than this chicken, there was no chicken for sale. There was also no coffee, eggs, matches (to light the stove) or salt anywhere. We bought some salt and matches from Diana, and will try a couple places she suggested for coffee tomorrow. Meanwhile she will bring us another pot in the morning. 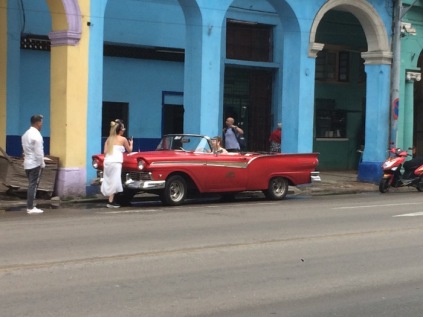 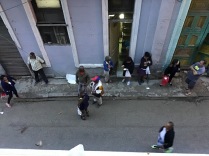 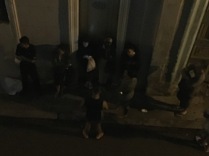 6:30, after dark, the same people were still waiting for chicken, and not happy that the store still wasn’t giving it out. As far as we could see, no individual got any chicken that day, only the shops who loaded up earlier.