The Las Olas Beach Resort had an OfertaSimple deal (similar to Groupon) so we decided to book a night there. It’s a nice resort right on the beach. We had visited before when some friends stayed there, but we had never stayed there ourselves. Of course I brought the camera!

Edder, who will greet you and get you checked in. 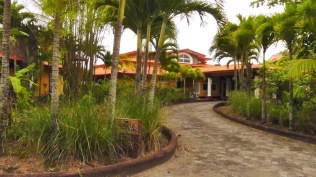 The driveway up to the reception area. 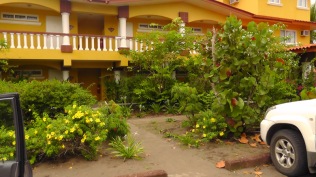 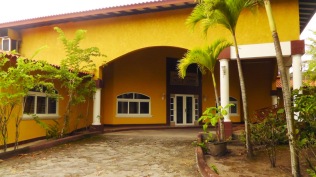 The bar area with table tennis and other games.

The bar area, with the pools just beyond.

Turtles in the turtle pond. 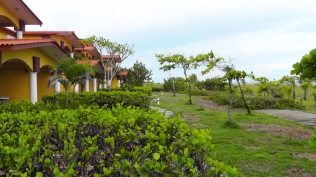 The back doors of the guest rooms looking out on to the beach. 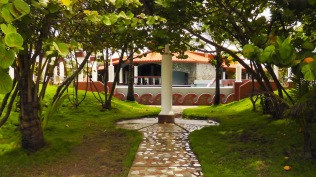 The pool area as you come back up from the beach.

Some of the playground equipment

A sitting area next to the pool

The path to the beach

The place is surprisingly quiet. We were told that there are 48 rooms there, but only 25 guests at the time. The waiter in the restaurant said sometimes it is busier on the weekend but generally it is very quiet.

There are two pools, one on either side of the raised shallow area.

The pools are really lovely!

Each pool also has a bar area.

One of the pools has this great fountain!

The grounds are beautiful. There are a lot of flowers, palm trees, and lovely landscaping. There are covered areas to sit around the pool, and the outdoor part of the restaurant looks out into the gardens with the beach beyond. The whole area is very attractive and looks ready for a crowd of people having a good time.

There was hardly anyone in the restaurant whenever we were there. The food was good and the prices reasonable.

The restaurant, looking back towards the hotel.

The view from our table looking towards the beach.

The rooms were large and comfortable. There was air conditioning and a small safe in the closet. We were given a cable at the desk that plugs into the phone for internet access, or there was free WiFi out by the pool and bar areas. It was slow but it worked. 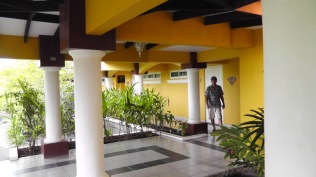 Heading to our room

Excuse the rumpled bed. Of course I don’t remember to take photos when we first arrive!

The bathroom is adequate, and has hot water.

The back door to our room coming out to the terrace which looks towards the beach.

There were activities advertised like kayaking and horseback riding. We were told that kayaking wasn’t available at this time though because there hadn’t been enough rain and water levels were too low. We’ve been getting quite a bit of rain in David, but apparently it doesn’t rain nearly as much at the beach. There were tennis courts available but they were not lighted. It is hot and very humid at the beach so outdoor tennis doesn’t sound very appealing except maybe early in the morning or late in the afternoon. There was also a gym area with a fair amount of exercise equipment, a collection of books mostly in English, and board games.

We walked across the street. Past this sign is a farm area and a large building, but we didn’t investigate enough to know what was going on there.

We were told that this caiman always hangs out in the little river just beyond the sign.

Looking in the other direction, you can see a few of the large beach houses in the distance.

These men who told us that they are working on turtle conservation. They find nests, and then move the eggs to a safe place so they won’t get eaten or sold by the locals.

The beach is definitely beautiful and it was nice having some time there. There are a number of really big houses farther down the beach, including one under construction by some friends of ours. The area is too isolated for us though. We’re city folks and like being close to all the activity. From the beach, there is only farmland until you get to David which is maybe 45 minutes away.

The resort is definitely nice and I’m sure we’ll be back again. We told them that they should organize bus trips to collect people from Boquete or David and take them to the resort for a night or two. No driving, hang out with friends, maybe a buffet and some music, it could be quite a party! Or, of course, if you want a quiet, relaxing time just to chill out and enjoy the area, it’s perfect for that too.

We live in David, Chiriqui Provence, Republic of Panama! This blog is about some of our experiences in our new country.
View all posts by Kris Cunningham →
This entry was posted in Panama, travel and tagged Central America, Chiriqui Province, Las Olas, Lodging, Panama, playa la barqueta, Resort, Travel and Tourism. Bookmark the permalink.