The Month of Holidays

People joke that nothing gets done in Panama in November because there are so many holidays! Maybe, but things get done like celebrations, parades, fun, and days off to enjoy.

The month began with Día de Difuntos on Sunday the 2nd. This is a quiet day when people honor the dead, reflect on the loved ones who are no longer with us, and visit cemeteries to leave flowers.

Monday the 3rd is the celebration of independence from Colombia. We have been hearing the marching bands and drums practicing for weeks, and this is the first of the holidays with big parades. I went last year in David and and watched the whole thing, four hours worth! It was great fun to see all the bands, all the young people dressed in their finest, and the very professional marching band performances.

Tuesday the 4th is Flag Day celebrating the flag that first flew in November 1903 after the separation from Columbia. Here is an article with a bit more about the holiday and the flag. On my way back from my morning ride I stopped by the Parque de las Madres which I knew was the starting point of the parade. Young people were lining up, and then bands started playing and baton twirlers twirled and people in traditional dress swirled their skirts and everything started happening as each group rounded the corner to the parade route. What fun! 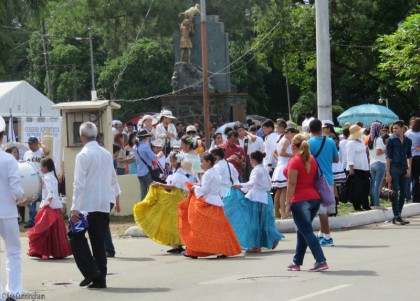 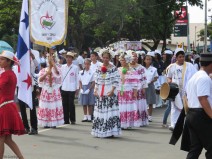 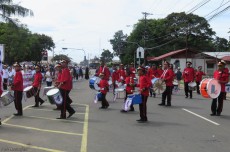 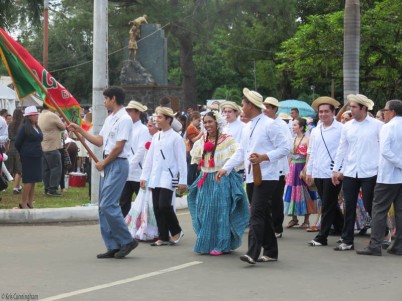 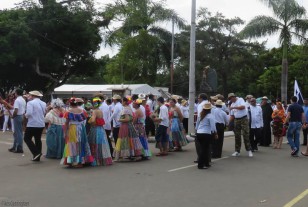 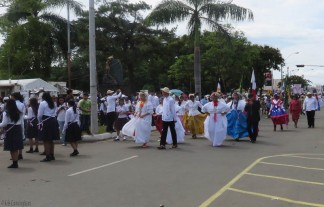 Wednesday the 5th is is the final day of celebration of the separation from Colombia. It is especially significant in Colón because in 1903, the Panamanian officials there prevented Colombian troops from getting on a train bound for Panama City where they planned to thwart the Panamanian independence.

Monday the 10th is el Grito de La Villa de Los Santos, or the shout in the Villa of Los Santos. The history says that in 1821, a peasant woman in Los Santos was the first to raise her voice for independence from Spain. There are celebrations of this event in Los Santos as well as in other areas of the country. I stopped by the Parque de las Madres in David again to watch the beginnings of this parade. I like it especially because there are oxcarts, traditional dress, and traditional bands and music. 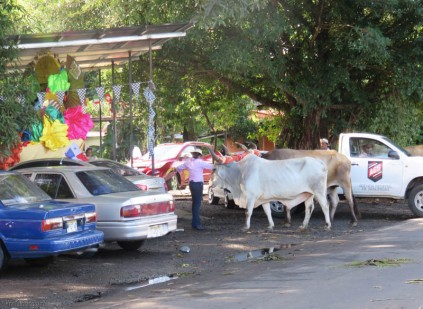 Oxen are dropped off at the car wash to get attached to their carts. 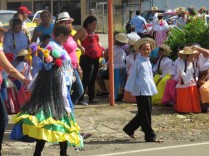 Girls in their beautiful dresses wait for their turn to start down the parade route. There were also a few dressed as mirror devils – https://epiac1216.wordpress.com/2009/11/19/the-mirror-devils-of-panama/

If your girl is small, you can bring her in a stroller.

More people make their way to the start of the parade. 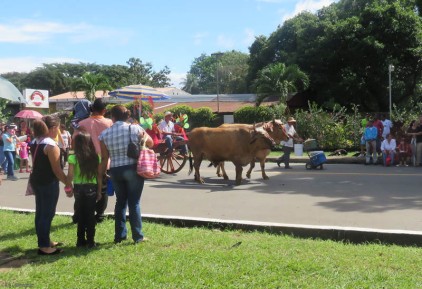 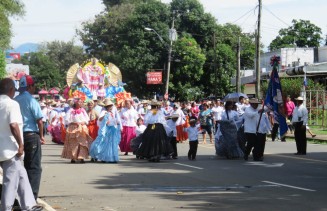 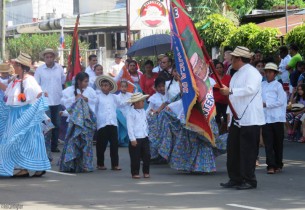 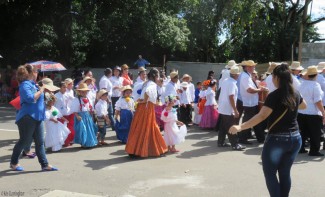 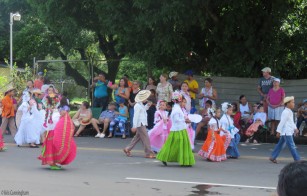 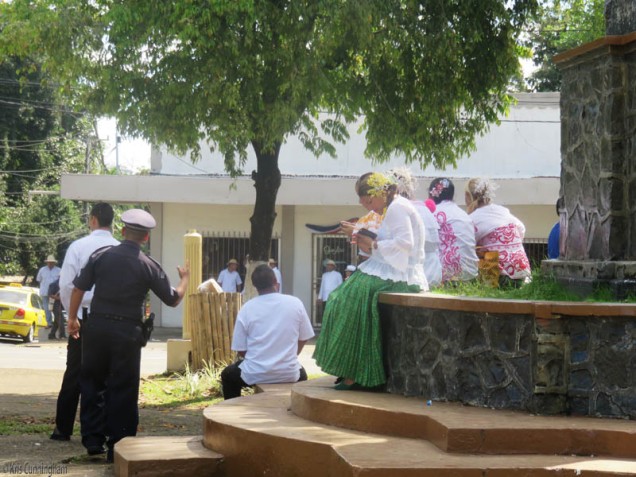 Girls check their iPhones and chat with the policemen while waiting for their turn to start.

And, there is more! November 28th is independence day from Spain with more parades and celebrations. And, then comes December with Mother’s Day, and then the Christmas and New Year’s holidays. Summer also begins in December with time off from school, various fairs and events around the country, and time for people to relax and enjoy the dry weather. There is no shortage of things to celebrate in Panama!

We live in David, Chiriqui Provence, Republic of Panama! This blog is about some of our experiences in our new country.
View all posts by Kris Cunningham →
This entry was posted in culture, Panama and tagged celebrations, Grito de La Villa de Los Santos, holidays, independence day, Panama, Parades. Bookmark the permalink.

9 Responses to The Month of Holidays