Every Saturday there is a market where the government sells staples like rice, sugar, salt, cooking oil, beans, lentils, and some canned goods. I have been to the one in Concepcion a few times, but I recently learned that there is one here in David as well.

I went last week about 10:30 planning to get some rice but they were sold out. Last Saturday I went closer to 9:00 and there was rice, and plenty of people in line to buy it. I had seen 20 pound sacks of rice before, but this day they were selling 4 – 5 pound bags together in larger plastic bags. 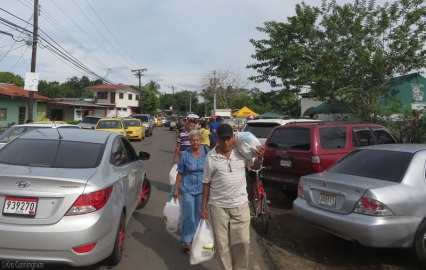 You know you are in the area when you see lots of people carrying the food they bought. They were at the bus stop on the Pan-American highway, and walking everywhere in the streets, a few getting into taxis and others leaving on bikes.

We found the end of the line out in the street. Do you see those green awnings in the distance on the right? That is where the rice is being sold.

That’s the head of the line getting close to the destination.

People here eat a lot of rice. When they can get it here for $6 for 20 pounds, rather than $10-12 in the supermarket they think it is well worth coming out and standing in line. A few dollars may not be worth the bother to some of us, but it can be significant for many of the local people. My assignment today was mainly to get rice for Cedo who watches every penny. She eats rice herself and she also makes her own dog food. Commercial dog food is very expensive here, and her dog is also much healthier on her diet of rice, lentils, veggie and meat scraps.

Besides the government sales, there are many other vendors along the side of the open space.

There were a number of vendors along the side. 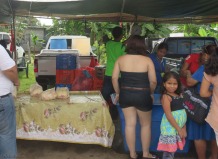 I bought one of these big chickens and it was amazing! He told me they are gallina de patio (yard chickens) and tender, and he was right. Mine was about 3 kilos, or 6.6 pounds, and I think I paid around $9. When I got it home I found the organs, neck, and feet inside. It looks like enough for 3-4 meals for the two of us, plus a good batch of soup.

Those things towards the left are pifa, a kind of nut or seed that grows on a palm tree. They are starchy, sort of like a chestnut with a nutty, nice flavor. Many people recommend you eat them with coffee or coca cola. The lady is holding mamon chinos, or rambutan, a fruit related to the lychee. They have a white, delicious bite of fruit inside with a sweet, slightly tart flavor. 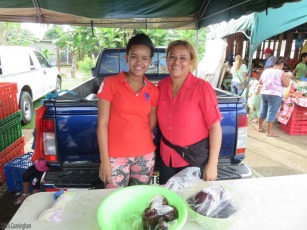 These two ladies sold me a bag of conch which I bought out of curiosity.

The produce vendor was very popular.

I’ll try anything once, including conch. I was expecting something rather large that could have come out of the big conch shells I have seen, but instead the bag was full of small things about the size of a half dollar. The lady carefully explained that I should saute onion and garlic in butter, and then add the conch and cook it quickly. They should be eaten with patacones (a very popular dish of friend plantain patties, something like round french fries). I went to Cedo, my cooking guru and we put onion, garlic, aji (those small but sweet peppers) and some tomato in the food processor, sauteed that in butter, and then added the conch. I didn’t think we cooked them long but it is hard to tell when they are done. They had a very good flavor but were a bit tough, which could have been from cooking or because that is just how they are. I remember eating conch at a restaurant in the Florida Keys and it was about the same. So, I’m glad I tried it but I probably wouldn’t buy it again.

If anyone local is curious and wants to check out this market, here is a map and the red X marks the spot. 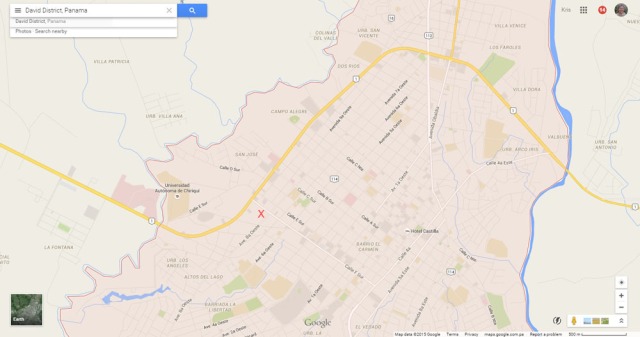 There is a traffic light on the Pan-American highway where you turn onto calle F Sur.

No, we didn’t stand in the rice line after all. We were going to the supermarket next and decided that spending a few dollars more was well worth saving the time. I’m glad we went though for the opportunity to try the conch, and I would definitely buy more of those big chickens!

We live in David, Chiriqui Provence, Republic of Panama! This blog is about some of our experiences in our new country.
View all posts by Kris Cunningham →
This entry was posted in culture, Exploring the Area, food, Panama and tagged Chicken, conch, Food, food sales, food vendors, Rice, Saturday market. Bookmark the permalink.