Being a city gal, I don’t know anything about raising chickens but I am learning. My friend Cedo has chickens in her yard for eggs, and she recently bought some chicks that she will raise for meat.

There was a particular kind she wanted, and it seems the best place to get them is in Concepcion on Tuesday mornings. So, this last Tuesday we piled in the car and headed over. (They are not allowed on the bus so it’s either a car or taxi when you are carrying chicks. I’m not sure why since it seems pretty much anything else is allowed on buses. But, no chicks, and no fish)

We pull up to the farm feed store, and see a truck beside the store and a lot of open boxes along the wall.

The boxes are all full of little chicks!

Cedo bought 30 of the white (currently yellow) day old chickens, and four of another brown variety just to try them and see how they do.

Cedo checks out her new chicks.

Cedo keeping an eye on her new babies in the back of the car. Yes, there was a lot of cheeping going on!

When we got back to the house, she had a house ready for them (actually a recycled dog crate). It was in the back yard under a tarp to keep the sun and rain off of them.

The chicks are in their new house. The food towards the back was popular, but the water (with vitamins) toward the front was very popular. The babies had had a thirsty morning. 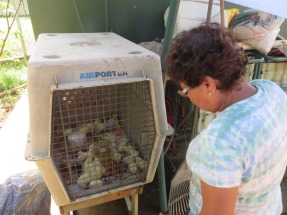 Cedo gives them one last inspection before we go out to do other errands.

The other chickens didn’t seem to interested in the new arrivals, and kept busy inspecting every inch of the yard for a bug or interesting leaf to devour. These chickens also arrived as little one day old chicks and they have grown fast and thrived. They are supposed to start laying eggs when they are six months old which shouldn’t be long now, maybe another month. 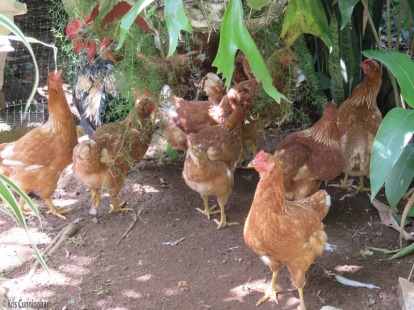 The girls run around the yard, usually all together.

The rooster, a rather ugly fellow, keeps watch. His breed normally doesn’t have feathers on the neck, but they look very strange to me. Apparently fertile eggs are considered better, and he is here to be sure Cedo has top quality eggs. He and a couple other hens are from the farm where they were in some danger from coyotes or wild dogs.

They have dinner time figured out, and will come running whenever anyone comes in the yard.

Today I stopped by Cedo’s house and the chicks are now in the pen at the back of the yard. They were making a mess with their water, and the newspaper under them was getting all wet which made the chicks a bit damp, not a healthy situation for little chicks. Now they can go in and out at will, and the water is outside where it won’t get their box wet.

It will be interesting to watch this process. Cedo is very careful to keep her chickens healthy and free of hormones and chemicals, so there should be some really good eggs and meat. My next big question though is, who is going to kill the chickens? I suppose if I eat chicken it’s only right that I learn about how they get from the yard to the plate.

If any of you are local and want eggs or chicken, you know who to ask! She will also be taking orders for tamales a couple times a month, and she can make some really good tamales. At this rate I may never need to leave the neighborhood 😀

We live in David, Chiriqui Provence, Republic of Panama! This blog is about some of our experiences in our new country.
View all posts by Kris Cunningham →
This entry was posted in culture, food, Panama and tagged chickens, chicks, eggs, gallena de patio, huevos, meat, pollo, Poultry. Bookmark the permalink.