Traveling out of Panama City

I took a few pictures in Panama City, and then as the bus left the city. 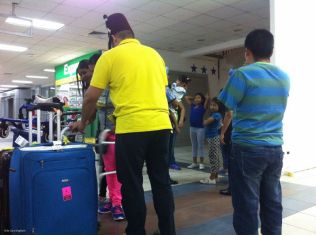 This was in the airport lobby where people arriving come through. The guy in the yellow shirt had a Shriners hat. The guy in the blue shirt was missing an arm, the girl being held was missing a leg, and the girl in the pink pants has a lot of trouble walking. There were lots of hugs and smiles all around so whatever was going on looked like a happy thing. 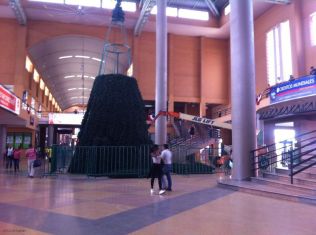 They were putting up the Christmas tree in the Albrook bus station.

Everything went smoothly at the bus station and before long we were on our way. 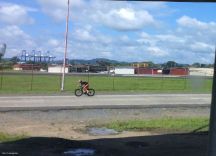 A cyclist is out training 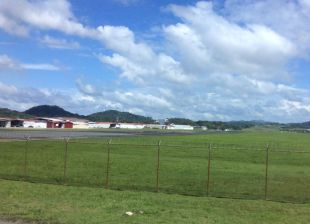 The train line is also here

It was one of the many November holidays so many buildings were decorated in flags and red, white, and blue.

I snapped this photo as the bus crossed the canal on the Bridge of th Americas. Out there, just to the right of the three left most crane. Are those the new locks?

One of the pleasures of taking the bus is the beautiful scenery. There are wind turbines in one of the photos. I was on the wrong side of the bus but managed to get this photo as the bus went around a bend. I remember when there were only a few, and now there are a lot more all the way up to the road. Someone told me they weren’t working when he saw them but they were all turning on this day.

It’s been busy between travels, a great time with a visiting nephew, and getting settled back in but things seem to be getting somewhat back to normal again.

7 Responses to Traveling out of Panama City