It is Tuesday morning and this is what it looks like in my yard! Yes, that is SUN, and BLUE sky. It is still mostly cloudy though and I would have missed that glimpse of sun if I hadn’t been sitting outside. 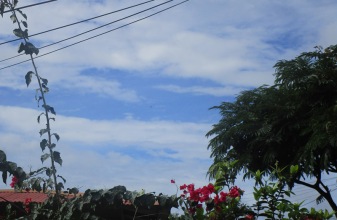 The storm continues to be a cause for major concern. According to Weather Underground, it is right above Panama City, Colon, and the canal. It is barely moving but gaining strength, and is expected to become a category 1 hurricane very soon. It is still expected to make landfall near the Costa Rica / Nicaragua border sometime Thursday night.

I was watching the local news at my neighbor’s house yesterday evening, and they were showing a lot of flooding and damage. People have been evacuated from the areas of Alaje (a short ways west of us) and Barú (closer to Costa Rica) and the towns are closed off because of flooding and storm damage to roads and bridges. Two teenagers decided to bathe in a river and got swept away and drowned. One has been found and they are looking for the body of the other one.

Trafico Panama, a website that monitors traffic flow posted a number of photos of flooded streets in Panama City on their Facebook page. La Prensa, one of our news sources is posting stories of flooding, land slides, and country wide problems, though as one would expect the Caribbean side of the country has been hit the worst. (Nice to see Trump also made the front page because he canceled a meeting with the New York Times. Yes the whole world watches the US). They also report that Costa Rica is evacuating people from their Caribbean coast. I hope Nicaragua is taking similar precautions.

The Red Cross is asking for donations of water, milk, and diapers. 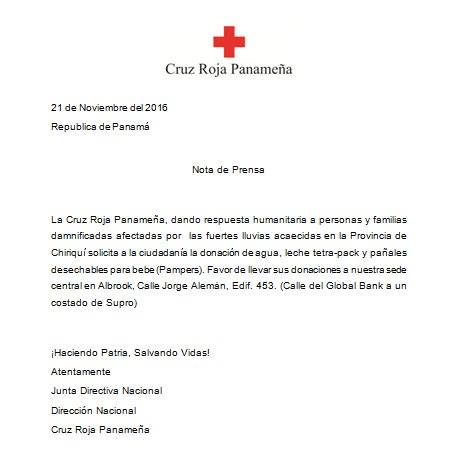 Thank you all for your concern about us here. We are just fine. We are high enough above the river that there is no way it could flood up here. We have a good sturdy house and we don’t have to go anywhere if we don’t want to. But, I continue to be very concerned for our neighbors. There are many people here, in Costa Rica, and especially in Nicaragua who are poor and don’t have sturdy houses, and could suffer greatly in this storm. I’m glad to hear that evacuations are under way and efforts are being made to keep everyone alive and safe.

Since there has been so much interest in my last post I’ll write an update daily until the storm is gone.