I’ve noticed a little brown bird coming and going from one of our bushes by the driveway. When I investigated, I found three little bluish eggs in a nest. On Friday when I checked on them, I saw that two had hatched. On Saturday, and again today I saw two birds so apparently the third egg didn’t hatch.

I plan to disturb them as little as possible but I’ll try to look in on them occasionally. We have found many similar nests in the bushes, and the doves like to nest in the bushy palm plant in front of the house. Another bird likes to make a nest on top of a pillar and manages to drop a lot of nesting material and make a mess below. We also have countless visitors from hawks, falcons, and vultures to tiny finches, wrens, and hummingbirds. It is said that there are more varieties of birds in Panama than in the whole of North America, and since we live next to a wooded area we get to enjoy many of them.

We also have more varieties of insects than in the whole of North America. I’ve never seen so many kinds of bees and wasps. I noticed a bunch of little ones on a small branch of our guanabana (soursop) tree last Monday. By Tuesday I could see the definite beginnings of a hive, so I snapped a photo every day to see their progress. I’ve seen many of these hives on houses and in trees and some say they are good luck. They are like the most delicate paper and very lightweight. 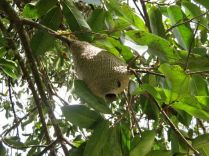 Sunday. They seem to be finished.

Bees here seem to be very easy to live with. I’ve only been stung once when I was pulling vines off the fence, not realizing there was a hive on the fence post. Even then they only sent out one bee, not half the hive. I’ve seen big bumble bees, very tiny brown/golden bees, and everything in between in brown, black and/or gold. Many of them don’t even have stingers.

Life in Panama… In most places you get to live with a lot of wildlife. We also get to live with a lot of rain most of the time. Yesterday it rained hard for hours and I heard about flooding in Panama City and I’m sure there were problems here too. When it rains that hard the water just can’t drain from the streets that quickly. But this is nothing compared to Texas. What I’ve seen in the news is beyond awful. It’s going to take a very long time to recover from that and even with the help of many generous people, many lives will never be the same.

6 Responses to Birds and Bees