What will you DO all day??

Posted on February 4, 2018 by Kris Cunningham

I think we’ve all been asked this. Before retirement, most of your days were filled with work but what now? What will you do with all this free time? I suppose this is a question for any retiree whether in Panama, half way around the world, or the house you lived in for 50 years.

This hasn’t been a problem for us. In fact, this came to mind because the last week has been super busy. But, I know others who have had problems adjusting to retired life. Maybe when work was a huge part of your identity you feel lost without it? Maybe if you don’t have interests and activities outside of work, it’s hard to see where to go next?

Add a move outside the country and it can get even more complicated. You probably left friends and family behind. Many things are unfamiliar and confusing which is an adventure for some, and a challenge for others. A language barrier can make you feel alone and isolated.

Also consider if you are in a relationship, will you enjoy all this time together or will you drive each other crazy? How will you find a balance of shared and separate time and activities that work for you both?

For me, the last months have been full of music. It has taken an enormous amount of time to get up to speed on the bass, but it is working wonderfully now. We played a private party on Wednesday. We were outdoors on a spacious terrace, warm breezy evening, lots of happy dancing gringos, while watching the full moon rise behind us and light up the clouds and distant mountains. It was magical!

Thursday we played at the Boquete Brewing Company to a mostly Panamanian crowd. They tend to stay out later than the gringos so the crowd grew as the evening went on and by 11, quitting time, people were having so much fun we played on until almost 11:30. We have learned that Panamanians don’t dance. It’s just not their thing but that night there was some Dutch tourists who instigated things and in the last set, a whole lot of Panamanians were also dancing!! It was SO much fun!

Then Saturday, last night, we played at Mike’s Global Grill to a gringo crowd. They tend to fade by 9:30 but there was a small group who stayed. I spent most of the last set playing bass on the dance floor with my friends which was totally fun! And we sounded so good! After playing so much we were tight and really had our act together. I don’t think we have ever played so well.

That’s probably more than you all want to know about band business. 😁 But as you also know, that’s hardly all I do. Painting and photography have gone by the wayside for now but I’m still on the bike sometimes, and working in the yard, and hanging out with friends, and blogging, and listening to books. Of course there are always the usual chores and errands but we seem to spend less and less time on them. This house is super easy to maintain and thanks to a freezer, shopping is much less frequent.

I’ve also been working on band promotions, as I think I mentioned before. I don’t want to hear again “I never know when you guys are playing”. Now we have business cards, a mailing list, and 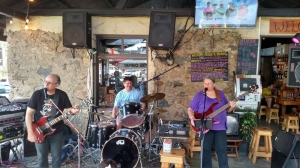 Retirement can be a total blast! It’s definitely worth giving a good amount of thought to what you will do. This time is an opportunity to do the things you never had time for before, or to go in new directions, pursue new interests, or spend more time on things you already enjoy. When the need to make money is taken off the table it changes everything. You can do things for only the enjoyment and satisfaction which is a beautiful thing.

10 Responses to What will you DO all day??