There have been many disasters in the US and world wide, but the fires in Northern California concerned me especially since they destroyed so much of Santa Rosa where my daughter lives. She evacuated with her family in the middle of the night when they saw the nearby hills on fire. Dozens of people she knows personally lost their homes and everything they own, and a number of people lost their lives in the fires.

We went to a NPR live broadcast about the recovery six months after that fateful night. https://www.kqed.org/forum/2010101864650/forum-on-the-road-santa-rosa-six-months-post-wildfires

Something dramatic happens overnight and it’s in the news for days, but it soon fades behind the next stories and we forget that it takes months and years to recover from what happened so quickly. 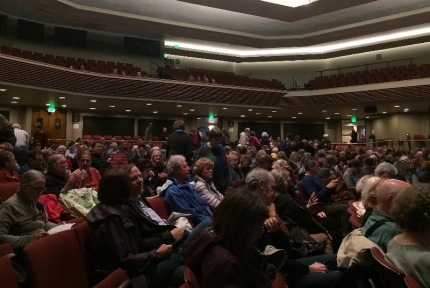 The broadcast had four people on stage the first hour, all people who had lost their homes. One lived in a more rural area north of Santa Rosa, another in a more affluent area near Fountaingrove with his family including an autistic son, another was renting in Coffee Park with his family, an area of mostly working families that was almost completely destroyed, and the forth was a teenager who was living in a FEMA trailer with her family.

In the second hour they had officials, the mayor, the county supervisor, a woman from an organization helping with rebuilding efforts, and a man from an organization helping undocumented people survive and recover. They talked about where they were in the recovery process, their goals, and their challenges. Throughout the broadcast people could ask questions by email, phone, and in person if they were in the audience.

There was a housing shortage in Santa Rosa before the fires and housing was very expensive. Many working people like teachers and nurses workers couldn’t afford to live there. Now, after the fires destroyed 5000+ homes, of course it’s much worse. Rent for a 1000 sq ft home is $3000+ and there is very little available to buy. A house in my daughter’s block is advertised for $2800/mo which she thought was crazy expensive until she heard people at the broadcast. No wonder there has been a steady stream of people coming to see the house. There are laws limiting how much rent can be raised but they don’t apply to a property being rented for the first time, unfortunately.

The other main challenge people talked about was working with insurance. One said it’s almost a full time job, and one of the most painful things was submitting an itemized list of everything lost. Imagine if you had to list everything in your home – your table, your chairs, the sofa you chose as a family, the chinaware from grandma, your son’s favorite teddy bear, whatever your family has collected through  the years. They said it brings the pain and trauma right back front and center all over again.

And, for additional pain, many people discovered they were under insured. What exactly is “replacement cost”? Is it the cost of buying a new similar item, or what your 8 year old item is worth today? Will your insurance cover the significant cost of clearing the lot before you can even begin rebuilding? Then of course, there is a shortage of manpower and materials which drives prices up. The area needed to significantly increase the amount of housing available even before the fires, and now the need is hugely increased and it’s going to take years to build everything needed.

As for the rebuilding process today, the burned lots have been cleared. Even that was a huge job because there were toxic substances in the debris. Very few sites show the beginnings of rebuilding. My daughter said about 90 permits for building have been issued, and about 90 more have been submitted for approval. That’s not many compared to the thousands of homes burned. Many lots are also for sale by people who don’t intend to rebuild, but at this point it’s hard to know what’s a fair price for a lot. Is it high because of the housing shortage, or low because many lots are available? It will take time for it all to settle.

There are still many burned trees and plants. People waited to see if things would recover, and now that they can see what is actually dead they are starting to clear trees and plants. The wine industry is huge in the area and many vineyards burned. Some are regrowing and some are not. Then there is the marijuana industry. There aren’t many legal and permitted operations now because they are still so new in the process, and none of them burned but others who aren’t permitted did burn, and still others suffered enough smoke damage to make their crops worthless.

The ramifications of a night of fire are huge! Some houses in Fountaingrove survived but the water supply is contaminated with benzene and the whole water system needs to be replaced. http://www.northbaybusinessjournal.com/northbay/sonomacounty/8147434-181/sonoma-santa-rosa-fountaingrove

Who knows what other problems will surface as the rebuilding process moves forward. There are a lot of people working hard for the many people who need to rebuild their lives, but it’s going to be long and complicated. Looking at how difficult this is, how must it be for people in poor countries who don’t have the resources and manpower to help them?

I think this is the last of my posting about the US. I’m happy to be back in Panama where life seems so simple. Will it rain? It’s hot. It rained today so it’s pleasantly cool. What ate the flowers on the hibiscus? The dogs are barking. These are our daily problems. Mi vida difícil (palm to forehead) has become the neighborhood humor, but also reminds me to give thanks every day for our good fortune.