There are earthquakes in Panama. We have felt quite a few. Panama is in the “ring of fire” known for volcanos and earthquakes. A few days ago we had a fairly big one, 6.1, on the Panama – Costa Rica border just down the road from us. We were sitting on the terrace at the time and it was a strange to feel the earth shaking and rolling under us. The locals said its the strongest they have felt, and it was fairly long also.

Pictures of supermarkets with everything on the floor made the rounds. There was news of some older homes damaged, but the injury in the news story is the only incident I’ve heard about where someone got hurt. I’m happy that our house is strong with reinforced corners and doorways. We don’t even have a crack. 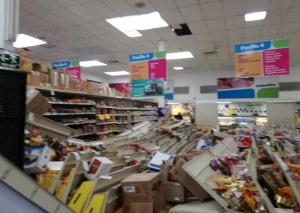 I wrote a post in the past about our earthquakes and the tectonic plates. I’ve heard that they tend to move over each other rather than bump into each other which is why we tend to get the shaking and rolling quakes which are less destructive than the jarring, knock everything over type.

We also have volcanoes. The country was made by volcanoes! Thankfully the one in our backyard has been quiet for 400+ years, though it is still classified as active. Our neighbors in Costa Rica and Nicaragua have had more activity though with volcanoes spitting ash, smoke, and gas, and the occasional eruption.

But, we don’t have hurricanes, snow, deadly tornadoes, or many other weather related problems that cause trouble elsewhere. So I think all in all, Mother Nature is pretty kind to Panama.

An earthquake gives us something to talk about for days. I think it’s the most dramatic thing that goes on around here. Otherwise we talk about are the iguanas who ate the flowers again, the chance of rain, the cows who got loose, and is the water off again? La vida difícil.