For our second day in Paris we explored a bit on our own, and our primary destination was the Louvre Museum. 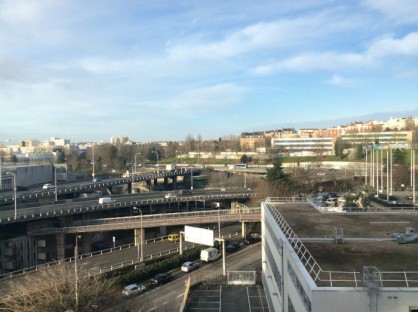 Good morning! Our view from our hotel window in

We set out in the metro, which is very easy to navigate

Suddenly this huge group of crazy cyclists came down the street showing off, doing wheelies, and alost hitting some of the bystanders

The Louvre and Arc de Triomphe

The Louvre is something else entirely! There is no way you can see a fraction of it in one afternoon, and I only have a few favorites here of the many, many things we saw. If you are interested in the art, an internet search will bring up lots of info and pictures. I think to really appreciate everything there, one would have to spend weeks exploring the museum. Still, I was really happy that we did get to see the little that we did.

We were waiting in line to enter, and these solders marched in and disappeared down below. 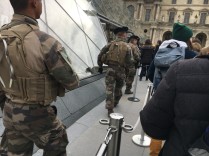 I don’t know what this was all about. We didn’t see any solders on our visit.

You enter the museum in the glass pyramid and go downstairs

On the right, Eros, known as the Borghese Genius, a Roman copy of a Greek statue from the 4th century BC. On the left, Eros and Psyche 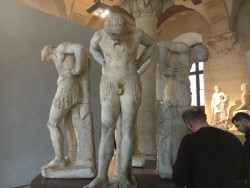 I should have taken more photos of the description cards 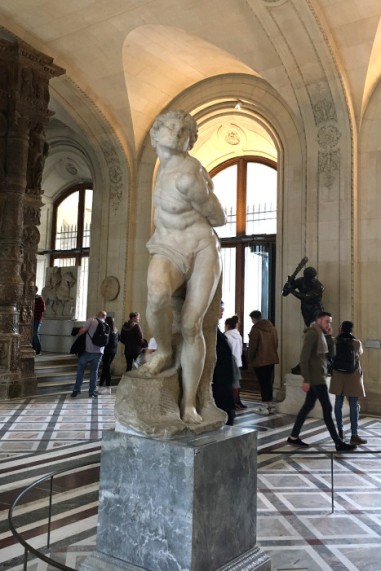 View down into the courtyard below 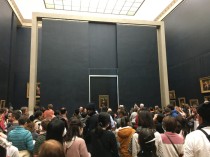 Yes, we saw the Mona Lisa 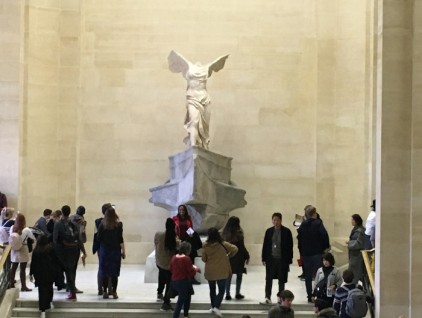 Winged Victory of Samothrace, also called the Nike of Samothrace, is a marble Hellenistic sculpture of Nike, that was created in about the 2nd century BC 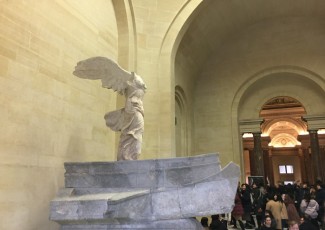 another view of the Winged Victory 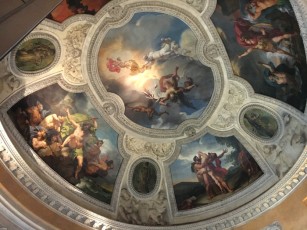 Ceiling outside the hall of the French crown jewels

French crown jewels, look it up on google

few more jewels (much better photos on the internet)

This doesn’t even begin to scratch the surface of only these works, not to mention the dozens and dozens more we saw, which were just a fraction of what is in the museum. I wish I could study about all of them, and then go back again!

But, we had one more thing we wanted to do that day, which was to go see Notre Dame. We grabbed a taxi to save our tired feet and went over there. 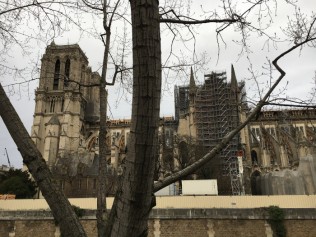 Notre Dame is closed for renovations after the fire. According to the info I found on line. renovations were already underway to repair years of weather and pollution damage. Some statues and art had been removed for the renovation, and other art was being stored in a location not touched by the fire. People did what they could to save everything else, and if I understand correctly, art affected by the fire suffered smoke damage, not destruction. So thankfully, the vast majority of Notre Dame should be restored, and much of what burned was in poor shape and needed to be replaced anyway. But, it’s going to take years and a lot of money to restore and rebuild this beautiful cathedral. Meanwhile, visitors can only see if from the outside.

On another note, I think I mentioned that when we returned from our trip, which included Italy, we were taken aside at both the Panama City airport and the David airport. We continue to be under at home quarantine with daily calls from both Panama City and David health departments to check on us for any signs of illness.  So far, knock on wood, Panama has no known cases of the virus, and we are feeling just fine. We were pretty tired so it’s been nice to have an enforced vacation and rest period, but I think by the time we are done on the 14th we’ll be ready to join the world again. And, we’ll be able to get to the errands and things we need to do in town.

We’re lucky though! We have a stocked freezer, a fruit/veggie guy who comes by weekly, and would more often if we asked, and friends we can all on if necessary. I can see how this would be a total pain for someone who didn’t have what they needed on hand, or friends to help, or the worst, a loss of critical income if they couldn’t go to work.

One would think, being home all this time, I could get pictures sorted and posted a bit faster, huh? But… there’s music to practice, things to read, research to do (and you know about those internet rabbit holes), and relaxing and just hanging out. I honestly don’t know how I ever had time to work and do all the things I used to do in the past!

2 Responses to More from Paris