We’re locked down again this weekend. Everything continues to be at a standstill. Numbers are more or less the same day after day, and they are very reluctant to take any more steps to reopen the country under these circumstances. This is so hard on so many people and I’m thankful I don’t have to make those decisions.

We are fine at home. I’m glad we can ride out this crazy time here in Panama.

It’s Sunday morning now, everything calm and quiet except the dogs. They are bored enough to bark at anything and everything, including the neighbor out in his yard. The critters continue to live their lives as usual. Right now there are birds singing everywhere. We have SO many birds!

These huge grasshoppers are cool, but there seem to be more of them this year which worries farmers who don’t appreciate their big appetites.

Some people are very concerned about the wildlife here. We do have a few dangerous things like the fer de lance snake and scorpions, but with some sensible precautions you can reduce the risk of problems. Don’t put your hands where you can’t see. Shake out clothes, shoes, and towels before using. The wildlife would rather escape than attack so don’t put anything in an impossible position. That said though, I had a lot more trouble in Florida where I was always getting bitten or stung by something. Here it rarely happens. I mostly get bitten by one of the many, many varieties ants (which wouldn’t happen if I didn’t disturb them while puttering around in the yard).

Joel keeps some wood scraps behind the house and it’s a popular location with the scorpions. A sting is painful but not deadly.

Cane toads are also something new to me, It seems like I’ve seen more in the last few years, or maybe I’m more aware of them since we have a dog. (A Cane Toad Can Kill Your Dog) Thankfully she totally ignores them. I was sitting at my table on the terrace early one morning, and heard a “plop” on the low shelf by my foot. It was one of the most ginormous cane toads I’d ever seen! It was huge! And slow… I chased it around with the broom trying to send it to the yard instead of the laundry room. It was so slow I ended up pushing it around like a rock. I finally got it off the terrace, and later I saw it hopping slowly towards the fence on the far side of the yard.

Speaking of huge, our produce guy gave me the biggest mango I’ve ever seen.  If it’s as good as I expect, the seed (with some of the fruit) will go to my friend so she can plant it on her land.

yes that’s an ordinary size pencil next to it

Oh, I said plants too, didn’t I? I believe this is some sort of agave. It’s putting up a big stalk and I noticed this week that it’s making flower buds. It will be interesting to see how it proceeds. I’ve seen others around town that make flowers like this, and then the flowers develop into many baby plants. 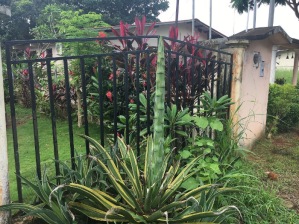 So, this is about all that’s going on around here. Days fly by and I always seem to keep busy. But, one day is a lot like another which doesn’t define the time much, so it seems to just slip by so quickly.

We’re all going to look back on this as the most insane year! Hopefully we’ll all be here to look back. Take good care of yourselves and each other.