Someone suggested this on a yahoo group GardeningInPanama  I tried it and it turned out surprisingly good!

A chayote is a sort of squash from the same family as cucumbers and melons. It costs a lot in the US but around here it’s everywhere, and cheap (usually $0.20 each, or less by the bag full)  Check the Wikipedia article if you want to learn more about this veggie. I love chayote! It’s a mild and gentle flavor, firm enough not to turn to mush when you cook it, and useful in probably any vegetable soup or other dish with veggies that you want to make. Chayote has become probably our most frequently eaten vegetable here. The closest thing that tastes like it that I can think of in the US is patty pan squash. 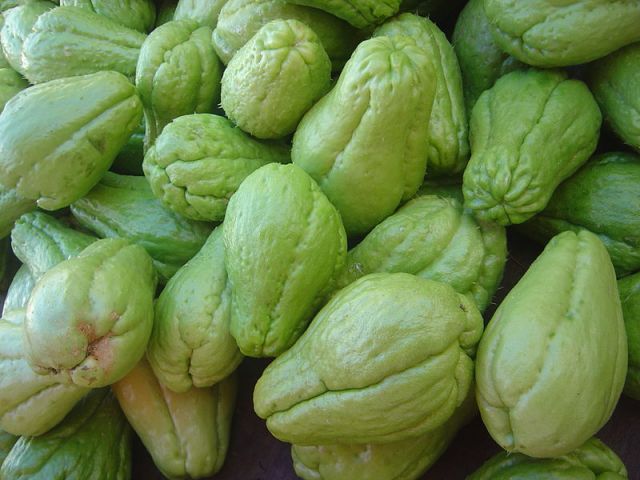 For my saurkraut, I took two of them, peeled off any skin that looked too thick (optional), removed the seed in the middle, and grated them. I also grated a smallish carrot, and added some finely chopped ginger and garlic. According to the guy who posted the recipe, you can add whatever veggies and flavorings you like.

Then, I got out my plastic bowl (don’t do this in a metal bowl), put in a layer of veggies, sprinkled them with salt, another layer of veggies, more salt, etc. until I had used all the veggies. I didn’t know how much salt to use so there is probably a couple teaspoons altogether for about 4 layers.

Then, put a dish on top to weight everything down (or whatever you have on had that will do the job). The idea is that liquid comes from the veggies because of the salt, and the veggies needs to be weighted down enough to keep them under this liquid.  Then, the suggestion was to wait about a week or until you like the way it tastes.

So, I waited about a week (though I thought it was starting to taste pretty good even the next day) 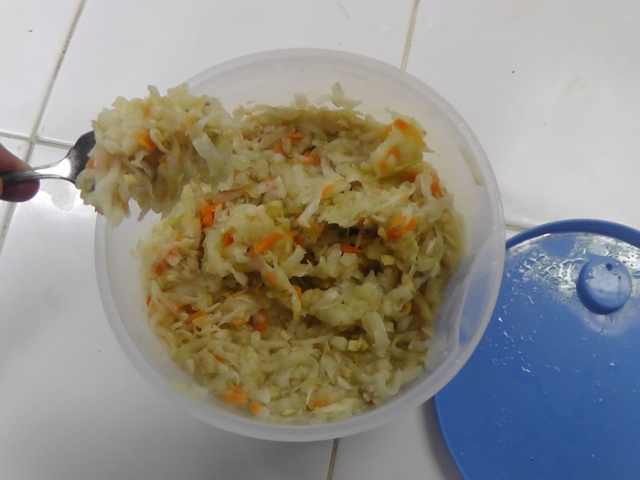 In this batch I had maybe a 3/4 inch cube worth of ginger, if that much. I don’t remember how much garlic I put in, maybe 3-4 cloves? It is definitely garlicky, much like a great garlicky kosher dill pickle so I like it a lot. Of course you can use less garlic or adjust the flavorings however you like.

I will definitely make this again! It wasn’t that hard to make, and other than having an extra bowl sitting around for a while and taking a moment every day to check it, it wasn’t any trouble. However, I would recommend covering the bowl with a plastic bag or something just to keep any insects or dust or whatever from falling in.

The picture at the top of the post is a chayote vine we saw growing in Boquete a couple weeks ago.

We live in David, Chiriqui Provence, Republic of Panama! This blog is about some of our experiences in our new country.
View all posts by Kris Cunningham →
This entry was posted in food, Panama and tagged Central America, chayote, Chiriqui, Chiriqui Province, David, International Living, Panama, recipies, sauerkraut. Bookmark the permalink.