We were told that scorpions tend to come in houses during the dry season because they are looking for water. We have found this to be true so far. We are now in the height of rainy season though and yesterday, when we were showering, I happened to look over at the shower curtain and there he was! 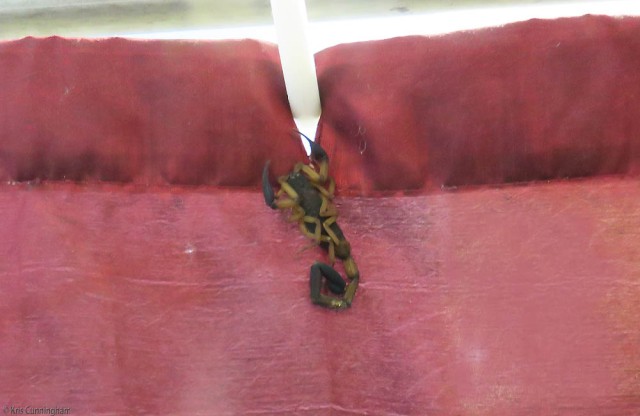 What is it about the shower curtain that they seem to like?

This is the second time we have found one near the top of the shower curtain. It was probably hiding in the folds and when we pulled the curtain closed, he was revealed. I think these are pretty cool critters, but not in the house please. Joel got it into a bucket and I tossed it over the fence into the woods where, hopefully, it will make its way somewhere else.

In the bucket, ready for its flight over the fence.

We share our environment with a lot of various critters so it’s always good to shake out clothes, shoes, towels, and anything else where something might be hiding. And, never put your bare hands in leaf piles or other likely hiding places outdoors either. These are good things to do anywhere you live, just in case.

I love living next to the woods because of all the birds and wildlife! If one gets a bit closer than I’d like, at least I can grab a camera and share a photo before it gets “relocated” over the back fence.

We live in David, Chiriqui Provence, Republic of Panama! This blog is about some of our experiences in our new country.
View all posts by Kris Cunningham →
This entry was posted in insects, Panama, wildlife and tagged insects, nature, Panama, wildlife. Bookmark the permalink.