just another day in the life of a retired expat in Panama….

One of my longer bike routes takes me northwest of David through the countryside and up into the hills. It is so pretty! The other day I decided to take the camera with me and share a bit of what I see.

This pretty yellow headed caracara was in front of the house. I have seen them a lot in the country but they are unusual in our neighborhood.

There is a big lot down the street which has recently been fenced in. I wasn’t sure why since nothing goes on there, but now there is a bunch of horses enjoying all the tall grass and relaxing under the trees.

As I left our neighborhood, Volcan Baru looked spectacular!

There isn’t a good way to go west along the Pan-American highway so I cross the highway and go southwest through town, and the cross back over at C Sur. This takes me by the neighborhood “La Princesa” (I’d live there just for the name), and then through the town of Aguacatal. 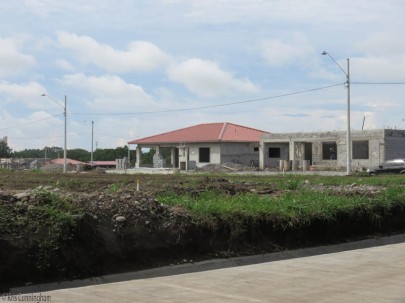 On the way to Aguacatal there is a huge residential neighborhood under construction.

As you go farther, the countryside is so beautiful with green fields (often with cows) and mountains in the distance. It looks like something for a travel magazine.

It is unusual to see snakes but this day I saw two in the road within a few meters of each other. This is a beautiful and harmless Mangrove Cat-eyed snake. 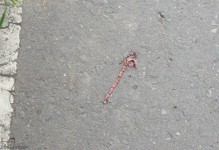 This is a not so harmless little coral snake. “When red touches yellow he’s a bad fellow”

What day would be complete without an interesting bug. This was running around like an ant but was a lot more interesting. 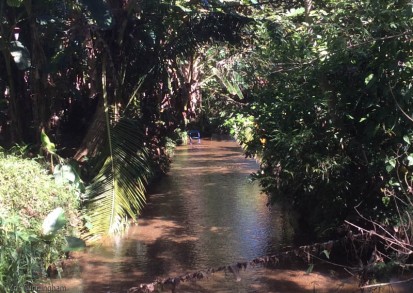 The route takes you across some very pretty rivers. This is actually a bit east of the main route but I love the chair in the water.

The route then goes through San Juan, and continues at pretty much steady climb until it intersects with 425 which comes up from San Pablo. (I know this doesn’t mean much if you aren’t familiar with the area, but if you find a Google map of the area you can find where I am)

The elementary school in San Juan. The kids will usually holler greetings if they are outside.

The route continues to go through beautiful green fields with cows, and green hills. 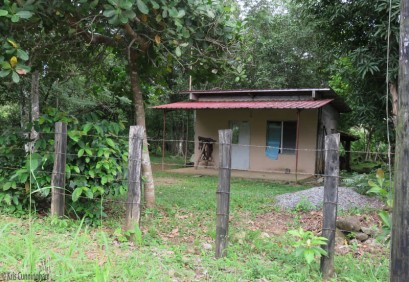 I like this simple little house with the saddle waiting outside.

I don’t think this little old house is being used, but it sure is picturesque. 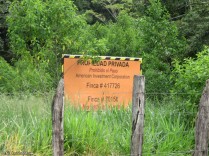 Almost to 425 in a beautiful area, but quite far from anything, is this sign. 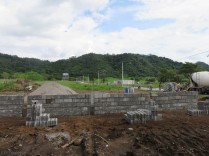 Just beyond the sign is this new housing area under construction.

When you reach 425 it feels like you have gotten somewhere but actually, the climbing will only increase.

I passed this guy riding his horse. They were just walking along, while I was starting to grind my way uphill. It shows how strong a horse is to not only go up, but do it with a man on his back.

This very basic house is in a pretty spot next to a small river. 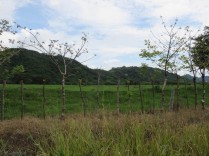 I’m getting there! The tops of the hills aren’t as far up as they used to be. 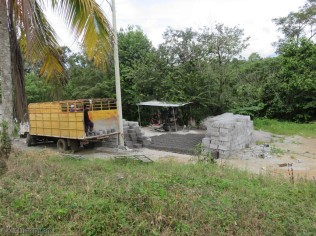 One of a number of places on the route that makes cement blocks.

A turkey vulture (red head) and a black vulture on the fence posts.

After awhile 425 intersects with Ave. Joseph Halphen which not only takes you back to David, but goes mostly downhill.

Yeah, heading downhill! It is surprising how much things change in each area. 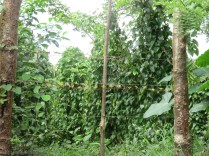 Along here there are a lot more food crops. This is yampi, a type of yam (Dioscorea trifida)

There is a lot of yucca in this area.

Some plantains are growing next to someone’s house.

There are still lots of cows too, and sometimes they come to the fence and look at me so I can take some good photos. 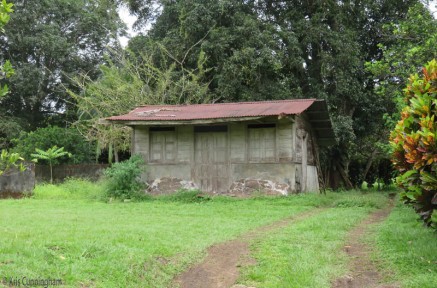 Another interesting and picturesque old house. 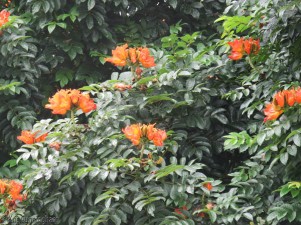 There are a few of these big trees all around the area covered with bright orange flowers. 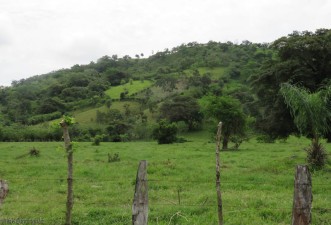 It looks like someone has crops on this hill. 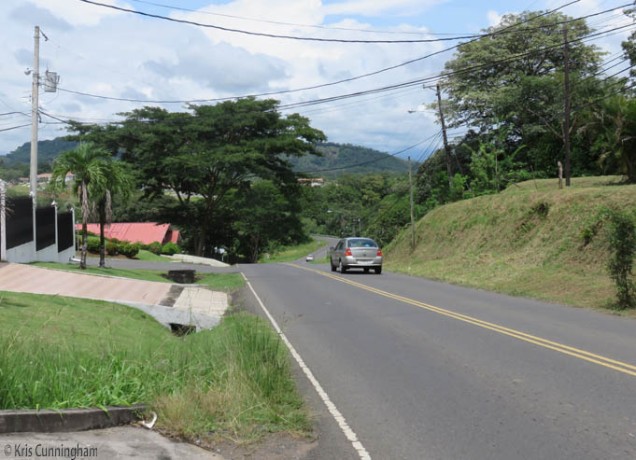 Yeah, almost home! I have yet to make it even half way up this hill though. It’s hard enough to do even on foot!

Once I get to the top of the hill, then it’s only a few minutes more to get back home.

Thanks for going riding with me! This is only a small look at the beautiful areas but I hope you enjoyed it.

We live in David, Chiriqui Provence, Republic of Panama! This blog is about some of our experiences in our new country.
View all posts by Kris Cunningham →
This entry was posted in Exploring the Area, Panama and tagged bicycle, bike riding, Chiriqui, Panama, photography. Bookmark the permalink.

16 Responses to Some Local Scenery