They are building a new bus terminal not far from where I live, and there are plenty of mighty machines on the job. I learned about mighty machines from my grandson who loves big machines and his videos by that name, so I always think of him when I see the heavy equipment. He would have a great time on this construction site! 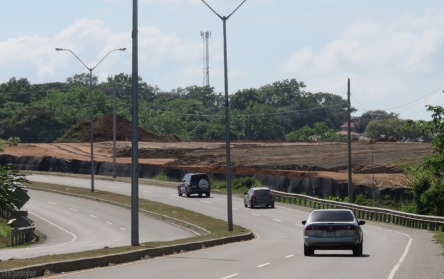 The site now has a barricade between it and the road but you can still see quite a bit from certain spots along the road.

This is very mighty! How many men could fit in that bucket?

It looks like they have been breaking up the huge rocks

I got pretty close to this one

Other than looking over the barricade or holding my camera above it, there is only one opening where the trucks go in and out where you can see in. I have stopped there to take photos and I figure if anyone objects, I’ll just explain my grandson’s love of big machines and they will probably let me slide. So far though, no one has raised an eyebrow and the guards have been pleasant and chatty.

While we are on machines and things my grandson loves, I have seen a helicopter down north of the airport. It looks like it is for aerial spraying. Yesterday though, there were two helicopters. The dark one doesn’t have the spraying arms so I’m not sure what they do with it.

It may not be a machine and it may not be mighty, but it’s my mighty machine. I wanted these new yellow panniers but thought it was only an extravagance. Now that I have them though (thank you daughter and son in law for the great gift!) I can say they are a big step up from what I was using. They are much stronger and it’s so much easier to get things in and out of them.  This day they were full of lemons for a friend, and a couple young lemon trees for her garden. It’s so fun to do errands with the bike instead of the car, and I wouldn’t even know this friend if I hadn’t been biking by her house one day when she was out in her garden.

We live in David, Chiriqui Provence, Republic of Panama! This blog is about some of our experiences in our new country.
View all posts by Kris Cunningham →
This entry was posted in Miscellaneous, Panama and tagged bus terminal, cycling, David, heavy equipment, helicopters, machines, mighty machines, Panama. Bookmark the permalink.