The New Bus Terminal and Mall

The amount of construction that goes on around here is amazing. There are residential and commercial projects everywhere! One of the biggest is a new bus terminal and mall which is supposed to rival Albrook in Panama City. I hadn’t been to the site in a while so I rode over to see what was going on. They have been busy! I wrote something in late March, and they were working on the first floor of the terminal and starting the second. Now, they are starting on a fourth floor!

I first went to the entrance of the site on Via Boquete, and then to the residential area south of the site where you can look down on the terminal side of the construction.

This huge machine was being loaded up just outside the site. I had to take a photo for my grandson.

I imagine the open cement space will be the parking area

this side is the mall

farther to the left if the bus terminal

The site as seen from the south

There is a video that shows what they plan the finished terminal to look like.

Just a couple other things… Joel’s band has been busy lately so we have driven up to Boquete a number of times. It’s usually gorgeous on the way up but I never get tired of seeing the mountains. This day we drove up in the rain but as we got close to Boquete, the sky cleared up and the sun was shining on the green mountain beyond. 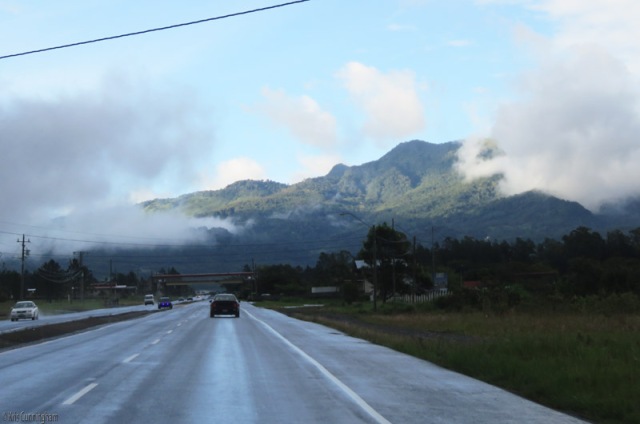 I missed most of mango season between being sick and then away on a visit to the US. But, there is one late fruiting tree that is still dropping really big green/red mangoes that are amazing. It’s in a vacant lot and the iguanas are usually there enjoying the fruit too. I caught one of them with my camera.

Life in Panama! Other than this, settling in with the new dog, and the normal activities of life there isn’t a whole lot new at the moment. Mi vida difícil continúa 😀

16 Responses to The New Bus Terminal and Mall