Posted on October 3, 2018 by Kris Cunningham

They are building a HUGE mall not far from where we live, so I bike over there now and then to see how it is progressing.

At first they spent what seemed like months moving dirt around, clearing boulders, and preparing the site. A year and a half ago, I wrote this post, when construction was starting and tons of people were hard at work. The post includes a video of the vision for the completed mall.

About three months later it looked like this. I’ve gone by a number of times since but never got around to posting pictures.  But, a few days ago I took some more photos and actually got them ready to share. 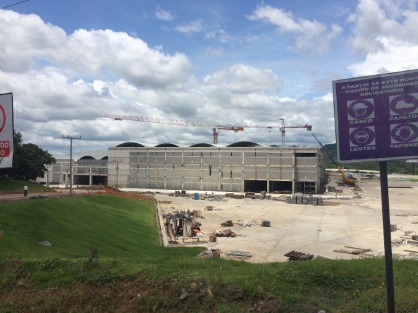 From Via Boquete, looking north.

Again, from Via Boquete looking north, but a bit farther up so you can see how big it is.

This is from a neighborhood south of the mall. There is a vacant lot with a good view.

Across from the mall is this storefront with information about the mall. I didn’t go in though.

It is really coming along! They guys on site said it will be another year though. When you think of getting 400 stores and whatever else will be there from block walls to finished spaces, that’s understandable. It’s a huge job.

I have heard conflicting stories about the bus terminal. At first it was planned to be there too, and then I heard it was going to remain downtown so I’m not sure what is going on with that. There would be more space and it would be easier for busses to get in and out at the mall, but many like the busses going downtown where they can easily walk to many places.

However that goes, it will be interesting to see how the mall works out. Who is going to shop and support all those stores? How many people in nearby and more expensive Costa Rica will be happy? How will it affect traffic in the area? How will it affect water and power use in a city that already has problems, especially with the water supply in the dry season? Traffic though… the Panamerican Highway is already bogged down with heavy traffic much of the time and could really really use a lot more traffic lights. Now there will be hundreds and hundreds of shoppers and employees trying to get to the mall? It’s a good thing I don’t like to shop 😁 Of course I’ll have to check it out though when it’s open.

I feel like we live in such a happening place! This is only one of many commercial and residential projects underway or recently completed. It’s exciting to watch, especially when we can retreat to our quiet little neighborhood at the end of the day.

6 Responses to The Federal Mall