Posted on October 7, 2019 by Kris Cunningham

October is said to be the rainiest month, and this October is not disappointing us. It has rained almost every afternoon, sometimes a little, and sometimes a lot! Everything is green and evenings have been cool and gorgeous. Some complain about the humidity but I like it. No skin lotion or chapstick needed here.

It’s really slow season now and we have been enjoying some downtime. The band had a weekend off, and then we played last Friday. It wasn’t a huge crowd but plenty enough people to have a great time. We have just been cancelled for this weekend while the Brewery closes for repairs and remodeling, and then we play every weekend until our late November USA visit. Word is that things are expected to pick up again in November as we go into tourist season. (This is Boquete. David doesn’t change much throughout the year since it isn’t a tourist destination).

Last Friday was great until part way through the first hour when I smelled hot plastic, and then my amplifier quit. It’s quit before, briefly, like it needs cool down time. It doesn’t happen often, maybe every few months,  but enough that we always have a backup standing by, thank goodness! It’s never had the melting plastic smell though and this time it’s very dead, no signs of life. I don’t understand it. I’m never doing anything unusual and warning lights never come on. It just goes dark and silent. I just bought a Peavey bass amp and it’s waiting in the USA, and now I’m especially glad! Reliability is very very important! Meanwhile I’ll be ok with an old but very reliable all purpose generic power amp. That’s probably more than you ever wanted to know about band equipment 😁 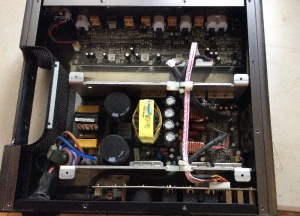 So that’s what is inside an amp. The smell is coming from the transformer in the middle with the yellow tape. No, I’m not touching it.

What else? We went out to dinner, very unusual for us since we like our own cooking but sometimes it’s just nice to go out. We went to the new Nationsushi down the street and it was wonderful! They have an extensive menu, the food is excellent, portions are generous, and the prices are reasonable. Google them for locations and a menu.

I should have taken a pic before we dove in, but you get the idea. Pad tai for him, sushi for me.

We apparently have new neighbors 😉  As I left on my bike yesterday I passed these guys a block from our house, in the middle of the neighborhood in a vacant lot. There is no fence and they aren’t tied up so I don’t know what is keeping them from visiting the other yards and nibbling on the flowers, but they were just laying around. They got up to look at me when I stopped but didn’t make a move towards me, and when I returned they were still standing just where they were. 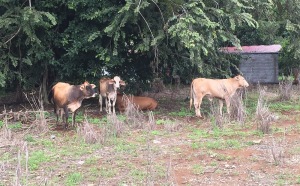 So, that’ pretty much it for the week. Oh, one more thing. I found this YouTube channel where you can watch this adorable Mexican grandma cook food. Here’s one of the videos.

I need to pay attention. Maybe I’ll find some things we can make.

It’s 1PM and I hear the thunder approaching in the distance. Feliz lunes! Hasta pronto.

5 Responses to October, Rain, and Downtime