Bob Adams has lived and worked internationally for many years, and now lives in Panama. He shares a wealth of information on both his website and his YouTube channel. His latest report can be found on his website https://www.retirementwave.com/reports  Look for the red text with the link to download this report.

He is very positive about Panama and thinks, though the economy has been a bit slower, it’s coming back nicely and there are a lot of good reasons to live in Panama. The report is a bit technical with numbers and graphs, but check it out and you’ll quickly get the general idea.

It’s Monday, Jan 13th (where does the time go so quickly??!)  Again, it’s hot, dry, sunny, and the wind has been picking up all day. We (the band) were in Boquete last night at the Boquete Brewing Company where we play outdoors on the terrace. It was a totally different world up there! We arrived while there were some spectacular rainbows in the sky!

the view as we drive into Boquete

view from the Brewery as we were setting up 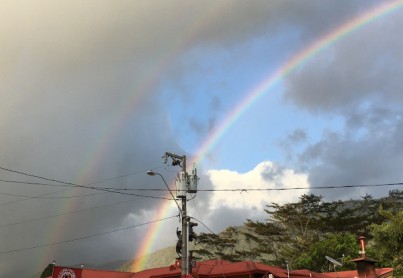 even a double rainbow for a while!

Then, it was downhill from there, weather wise. It was increasing wet, ranging from damp to actively raining, very windy and as the evening wore on, increasingly cold. I was cold even in my 4 layers of clothes (yes, I’m a wuss, but even the tourists had long pants and jackets). But it was still a fun evening and in spite of the weather and the wind blowing rain on them at times, a lot of the people stuck around for the whole evening which we really appreciated.

Boquete, however was a bit crazy. The famous coffee and flower fair is in progress and the town was full, lots of traffic on the roads, buses parked along streets, and as we were packing up we could hear the music from the fairgrounds. A lot of expats don’t like the music but it’s a Panamanian festival, and everyone knows there will be very loud music until well into the wee hours in the morning so if it’s a problem, it’s best to just take a mini vacation elsewhere. It seems the weather last night would make it hard to enjoy the festival, but they certainly weren’t going to shut it down because of some wind and rain!

Now it’s Monday afternoon, and there hasn’t been a bit of rain down here. It’s almost 3PM and we still have water coming from the tap! Apparently they have been working on valves in the system and that’s why it’s been off every day for many days, but I’ve gotten into a workable routine of using tank water during the day, and then opening the tap to refill the tank at night (I don’t want to leave it open in case the water comes back muddy).

Well this post was supposed to be about the Bob Adams report, but it’s easy to tack on a bit about what’s going on in our world today too. I’m not about to complain about anything. This is the view today from my daughter’s office in Seattle.

Hot and windy is fine. We are happy, and feel for all you up north in the cold and snow, and all of you suffering from the recent storms in the eastern USA. Hang in there you all!